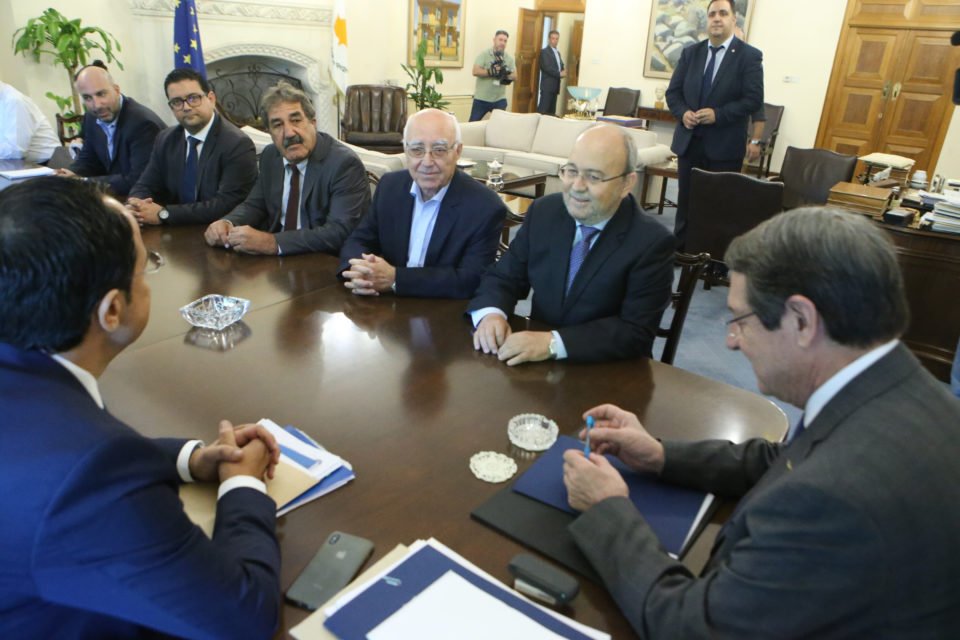 President Nicos Anastasiades, together with Famagusta mayor Simos Ioannou and municipal councillors, sat down on Monday to discuss a strategy to counter plans by the Turkish side to open up the fenced-off town of Varosha to settlement and development in violation of UN resolutions.

The meeting took place at the presidential palace. Speaking afterward, government spokesman Prodromos Prodromou told reporters the foreign ministry had submitted its report on the options and recourses open to Cyprus within the UN to halt the Turkish side’s move.

“The study… on the further movements of the Republic of Cyprus to the UN Security Council has been delivered today to the President of the Republic, with regard to the Turkish challenges in Famagusta,” Prodromou said.

He said the meeting with the Famagusta municipal council was “useful”, and that the president and the foreign minister had briefed them on all matters related to Varosha “including the representations, measures and the moves being made by the Cyprus government”.

“It was decided that there will be full coordination between the government and the municipality on Famagusta to ensure the greatest possible effectiveness of the steps being taken,” he added.

He said there would be more announcements later.

Mayor Simos Ioannou said after the meeting: “The president briefed us on all the actions he is taking for Famagusta and the Cyprus issue in general.”

Ioannou said the president would raise the issue of the Turkish challenges in Famagusta during his speech to the UN General Assembly and with the five permanent members of the Security Council plus the EU.

“The question of recourse to the Security Council is being studied,” he said.

In addition, he said his municipality would inform foreign media about the issue, and that a delegation would travel to Brussels on October 14 for meetings with EU officials.

Ioannou said the council has also proposed an extraordinary meeting of the National Council on Varosha, which he said was accepted by the president.

The council had also discussed with the foreign minister the possibility of taking measures to prohibit the sale of properties in Varosha. Ioannou also confirmed recent reports that Greek Cypriots who own property in Famagusta were being approached to sell them.  In some cases, Turkish developers were behind some of the foreign buyers.

On Sunday, Foreign Minister Nicos Christodoulides said the report to be submitted to the president contained the views of representative countries of the five permanent members of the Security Council – Russia, China, France the UK and US – and that the message to be sent to the Turkish side “would be clear”. He said no one could dispute the ownership of Varosha no matter how far the Turkish side proceeded with opening up the ghost town.

On Monday the French embassy in Nicosia told the Cyprus News Agency: “France expresses its concerns following the recent statements about the reopening of the city of Varosha” and “recalls its attachment to the respect of relevant United Nations Security Council resolutions, especially resolution 550.”

Christodoulides had been responding on Sunday to the latest comments by Turkish Foreign Minister Mevlut Cavusoglu in an interview with Greek Cypriot newspaper Kathimerini on Sunday where he repeated that Varosha would be opened. “The plan for the city will be made public after the necessary processes are done,” he said. Cavusoglu had visited Varosha last Monday with Turkish Cypriot ‘foreign minister’ Kudret Ozersay. Cavusoglu said the area should be used. “The non-use of the area serves no one,” he said.

On Saturday night, Anastasiades, at an event in the government-controlled area of Famagusta pledged to use every diplomatic means at his disposal to raise awareness abroad of the Turkish side’s plans to open up Varosha and that Turkey’s “challenges” as regards the ghost town would not go unanswered.

“I will use my presence in the United Nations, I will use my intervention in the UN, I will also have a meeting with the representatives of the five Permanent Members of the Security Council, and with the UN Secretary-General, while at the same time European leaders have been informed and I have requested it be I will be on the agenda of the European Council in Brussels in October,” he said.

“We will do our best to protect the city that has been waiting for 45 years, not for new settlers, but for its residents,” he added, saying he hoped there would be a ray of hope that Turkey could understand the meaning of international law, not only as laid out in the UN Charter but also in the EU acquis.

“Unfortunately, we have all witnessed lately the unacceptable actions and challenges, in violation of international law and relevant UN resolutions, by the Turkish leadership and some others acting on its behalf within the Turkish Cypriot community,” Anastasiades said.

Varosha will be colonised sooner rather than later