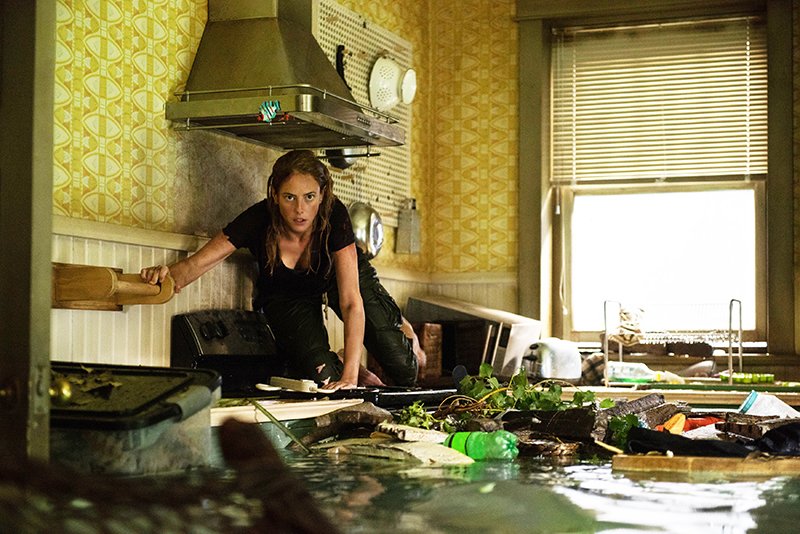 A father and daughter discover they are far from the top of the evolutionary food chain in Alexandre Aja’s diabolical masterclass in sustained tension and jump-out-of-your-seat scares.

Set in Florida during a category five hurricane, Crawl is essentially Jaws with alligators, albeit with considerably more on-screen gore courtesy of the French director of the 2006 remake of The Hills Have Eyes.

Michael and Shawn Rasmussen’s script is as lean and muscular as the apex predators, which eviscerate or death roll almost every character that dares to dip a toe into rising flood waters unleashed by Mother Nature’s fury.

The writers gleefully engineer a brutal and bloody battle for survival between sodden homo sapiens and voracious reptiles, steadily cranking up the suspense until we have no nails left to gnaw.

Stakes are high and no one is safe in Aja’s streamlined picture, a reality made deliciously apparent within minutes of a computer-generated alligator rampaging into view and dragging off a victim by the foot.

She plays Haley Keller, a member of the University of Florida’s intercollegiate swimming team – nickname, the Gators – who receives a concerned telephone call from her older sister, Beth (Morfydd Clark).

Hurricane Wendy is about to pummel the east coast and their father Dave (Barry Pepper) isn’t answering Beth’s calls to check he has evacuated the flood zone.

Haley defies the advice of local police and gingerly drives down rain-lashed back roads to find her old man at the family’s home in Coral Lake, which has been sold following her parents’ divorce.

Accompanied by a shaggy dog called Sugar, Haley explores the empty house and ventures into the basement, where she inches through sticky mud to discover Dave unconscious in the gloom.

He is bleeding profusely from a deep bite wound to one shoulder.

Before she can raise the alarm, the terrified student comes face-to-snout with a hulking alligator, which has entered the underground space via a storm drain.

Running to a compact 87 minutes, Crawl is a hugely entertaining thrill ride, which invests just enough time establishing characters and their backstories before the carnage begins in earnest.

Police officers and a trio of opportunistic looters are introduced as walking and splashing hors d’oeuvres to emphasise the power and speed of the alligators as Hurricane Wendy piles on the misery.

Action set-pieces are breathlessly orchestrated for maximum shock value and every time it feels safe to draw breath, Aja delivers an unexpected jolt to send popcorn skittering in all directions.

Hundreds of patients suffer due to NHS gaffes