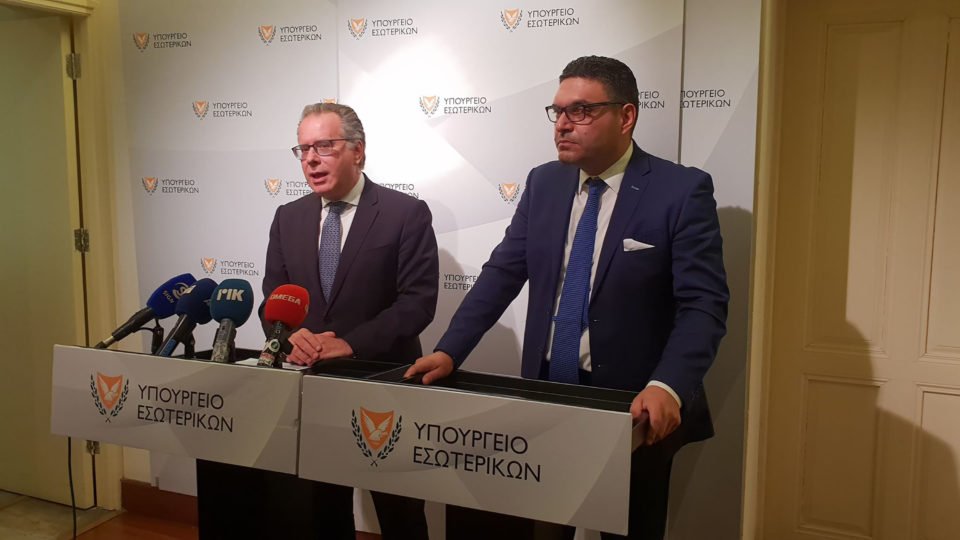 Cyprus and Greece said on Monday they planned to jointly demand a new European migration policy, saying it was high time frontline countries in the Eastern Mediterranean put forward their own priorities given the massive flow of irregular migration in the region.

The two counties are coordinating their actions ahead of the EU’s internal affairs council meeting on October 8 in Brussels, Interior Minister Constantinos Petrides said after a meeting with Greece’s Alternate Minister for Citizen Protection responsible for migration, Giorgos Koumoutsakos, who was in Cyprus on Monday.

Speaking to the press after their meeting in Nicosia, Petrides said that in view of the EU’s hitherto inability to create a holistic framework for immigration policy, and given the pledges of the new European Commission “the frontline countries and especially the countries of the Eastern Mediterranean must coordinate,” he said.

“The phenomenon of increased and massive migration flows from the Eastern Mediterranean route needs to be further highlighted and we must see it transformed into a policy at European level, a framework in which the principle of solidarity is translated into action and not just into financial aid,” he added.

The two ministers also touched on the issue of the EU-Turkey Joint Migration Pact with Petrides highlighting Turkey ‘s refusal to cooperate with Cyprus.

The meeting with the Greek minster came on the same day that the European border agency Frontex released its latest figures for irregular arrivals last month.

Overall, the total on all European migratory routes, Western, Central and Eastern Mediterranean for the first eight months of 2019 was 26 per cent lower than a year ago at around 68,700.

However, the agency said there were nearly 9,300 detections in August 2019 in the Eastern Mediterranean route alone, accounting for nearly three-quarters of the total number of irregular migrants reaching Europe.

This was double the figure from the same month of last year due to a large number of boats reaching the Greek islands in eastern Aegean, especially Lesbos, in late August.

Cyprus was excluded from the statistics, a footnote on the Frontex report said though it did not explain why.

But according to Petrides, in a speech he gave at the Red Cross five days ago, in 2017 alone the increase in asylum applications in comparison with 2016 was over 50 per cent higher. In the same trend, 2018 demonstrated a further sharp increase in migratory flows, this time 69 per cent higher than the previous year.

What he termed “the alarming” trend has continued this year where until July, a total of 7,812 new applicants were registered in Cyprus, “demonstrating an unprecedented increase of over 130 per cent in comparison to the already high influx of 2018”.

“According to the available data of Eurostat and EASO, for the third year in a row, Cyprus remains the top receiving member state per capita,” he said.

“Nevertheless, new alarming trends are emerging, such as the significant influx of citizens of Georgia, as well as of India, Cameroon, Nigeria and Bangladesh,” he said. “The situation continues to deteriorate, leading to a complete overload of the social and economic structures of the island.”

Petrides said on Monday that Cyprus and Greece were coordinating their actions to demand a new European migration policy, “which will be a practical implementation of the principle of solidarity”.

“It’s a European issue and the solution must be European with a common European policy,” he added.

Koumoutsakos said migration was an issue “that transcends the two countries, transcends each country separately, is a European issue and, in its long run, international.”
“The aim is to better coordinate as two EU member states, which are frontline countries,” he said.

“Our two countries are facing an upsurge in arrivals, and this obliges us to coordinate at the European level and try to convince our partners and European institutions that the principle of solidarity must be flesh and bone. We have to do what we are supposed to do, but Europe also needs to do what it should do when member states face such a great challenge.”

Koumoutsakos said now was the time, with a new European Commission, to take a stand, Cyprus, Greece and other Mediterranean countries “to put forward our own priorities, our concerns and our problems and to shape a new European migration policy. We need to do what’s right for us.”

The Greek minister was due to visit the Joint Rescue Coordination Centre (JRCC) in Larnaca later on Monday. A visit scheduled earlier in the day for the Kofinou asylum reception centre was cancelled. No explanation was given.

Our View: Serious questions to be asked over land prices

Israel’s Netanyahu fights for new term after decade in power