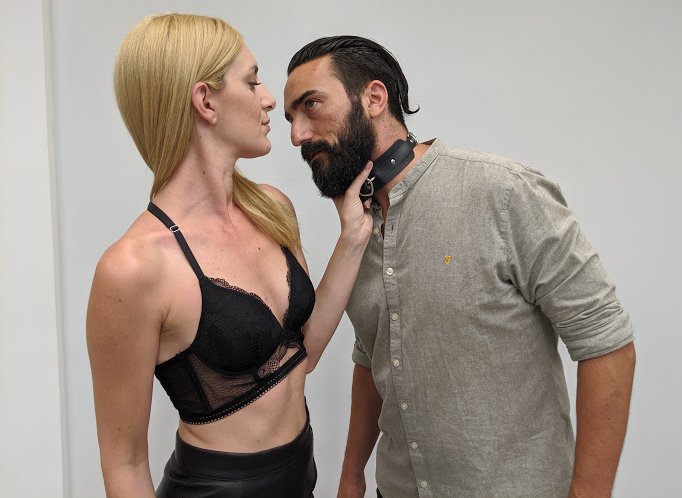 Think Fifty Shades of Grey and The Story of O, and you’re on the right track for ACT’s autumn oeuvre. It’s called Venus in Fur, and is loosely based on an 1870 novel by Leopold von Sacher-Masoch – the man who gave his name to the term masochism. And while this may be an unusual choice of play for the Anglo Cypriot Theatre company – best known for their rollicking Christmas pantomimes and divine summer Shakespeares – it is, says director James MacKay, “sunny, sexy, and dark! A crowd-pleasing Broadway smash…

“The original 1870 novel Venus in Furs tells the story of a young doctor who falls in love with a woman and agrees to obey her every command,” explains James. “At his instigation, she treats him in increasingly degrading ways, up to and including getting him to assist her in seducing another man while acting as her abused and unpaid servant. The novel was a succès de scandale; even today an inspiration for many novels that look at fantasies of submission and dominance.”

But then what would Masoch’s novel mean “in a world where women (at least notionally) have equal rights, and where the idea of a man submitting to a woman certainly isn’t seen as something novel?” James asks. And here we go contemporary, as we look at playwright David Ives’ more singular iteration – the play coming to the Pantheon – Venus in Fur.

“Thomas, a hip, young, successful playwright, is directing his first show, an adaptation of Masoch’s book,” James explains. “But he just can’t find the right actress – a beautiful woman who can project femininity, intelligence and control, but is also good at taking direction.” Discouraged, Thomas prepares to call it a day on auditions when In Walks Vanda…

“Brassy, dressed in thrifted leather lingerie, ignorant and loud, at first,” James reveals, “Vanda seems the very opposite of what Thomas is looking for in the part. Nonetheless, he agrees to let her audition. And what happens over the next hour-and-a-half is a game in which director and actress vie for control of the stage, the character, and the play…”

With sex, submission, and masochism on the menu it’s beginning to sound a bit dark. But this very modern play (which premiered off-Broadway in 2010) is actually “an out-and-out comedy,” says James. “The dialogue satirises the heavy melodrama and absurdly mannered storytelling of the original novel in a very funny way, and once Vanda has unleashed the first of her surprises she is constantly undermining the somewhat pretentious and overbearing Thomas.

“What I love about this play is precisely this game-playing element,” James reveals. “Just as in Masoch’s book, submission to being directed by another is really a form of control, so the characters are constantly in conflict with one another. Vanda in particular is hiding numerous secrets which are only gradually revealed to the audience, secrets which challenge Thomas’ stubborn belief that his play is a simple adaptation in which themes of gender and misogyny hardly matter at all.

“And, as his façade is also peeled back, we start to ask whether Masoch’s seeming belief in the independence of women really means that a modern adaptation would be in any way feminist. What happens when we think about Fifty Shades in a #MeToo moment? This is where we find director Thomas thinking himself a good liberal while simultaneously proclaiming that ‘theatre is the best way to get laid’!”

Staged as a single scene for two actors (Christina Marouchou and David Dimitriou) and set in America – “the back and forth between formal European manners and relaxed American manners provides for a good deal of comedy, as do the character’s sexual obsessions” – Venus in Fur promises to be a wildly exciting ride for the audience. It’s certainly been “interesting to direct,” James concludes; “not the sort of play that turns up often in amateur theatre.”

Hundreds of patients suffer due to NHS gaffes