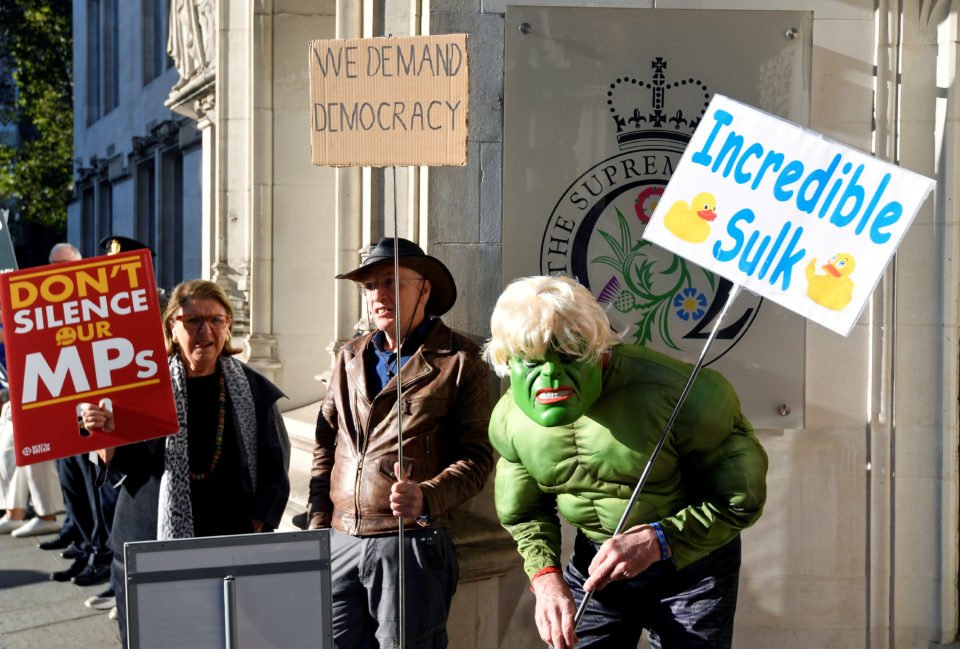 People protest outside the Supreme Court of the United Kingdom against Prime Minister Boris Johnson's decision to prorogue parliament, in London

Britain’s top court met on Tuesday to consider whether a decision by Prime Minister Boris Johnson to suspend parliament until shortly before the date for Brexit was illegal.

Scottish judges ruled last week the suspension was unlawful and supporters of the legal challenge in the Supreme Court want parliament recalled immediately if it rules against Johnson’s decision. Critics say he should quit if judges rule against him.

Johnson announced on Aug. 28 that he had asked Queen Elizabeth to prorogue, or suspend, parliament for five weeks from last week until Oct. 14. He said the shutdown was necessary to allow him to introduce a new legislative agenda.

Opponents said the real reason was to prevent scrutiny and challenges by parliament – where he now has no majority – to his Brexit plans, especially his promise to leave the European Union by Oct. 31 even if no divorce deal has been agreed.

In a damning judgement last Wednesday, Scotland’s highest court said the suspension was an “egregious” attempt to stymie parliament.

A week earlier the High Court of England and Wales rejected a similar case, saying the matter was political and not one for judicial interference.

Both cases are now before the Supreme Court, the highest judicial body in the United Kingdom. Its 11 judges will decide how far Britain’s unwritten constitution limits the power of the prime minister and whether Johnson’s advice to the queen was therefore illegal.

“The Supreme Court exists to decide such difficult questions of law and we shall do so in accordance with our judicial oaths.”

Launching the legal challenge to Johnson’s decision – by a mixture of anti-Brexit campaigners and opposition lawmakers – David Pannick said there was strong evidence the prime minister had wanted to silence parliament because he saw it as an obstacle.

“The prime minister advised Her Majesty to prorogue parliament for a period as long as five weeks because he, the prime minister, wished to avoid what he saw as the risk that parliament would take action to frustrate or damage the policies of his government,” Pannick said.

Johnson has said the current session of parliament was longer than any since the English Civil war in the 17th century, and that lawmakers would have plenty of time to discuss Brexit again after an EU summit on Oct. 17-18.

When asked on Friday if he had misled the queen, Johnson said: “Absolutely not.”

In a television interview broadcast on Tuesday, Johnson said he had “the greatest respect for the judiciary” but declined to say whether he would recall parliament if the ruling goes against the government.

“I think the best thing that I can do is wait and see what the judges say,” he told the BBC.

Justice Secretary Robert Buckland said the government would abide by the ruling of the courts.

The Conservative government says opponents of Brexit are using the courts to try to frustrate Britain’s departure from the bloc which was backed by Britons in a 2016 referendum.

The Supreme Court ruled against the government in a similar constitutional case in 2017 when it said ministers could not begin the formal two-year exit process without the approval of parliament. Its hearings will run until Thursday, with the verdict not expected until Friday at the earliest.

“It is important to emphasise that we are not concerned with the wider political issues which form the context for this legal issue,” Hale said. “The determination of this legal issue will not determine when and how the United Kingdom leaves the European Union.”