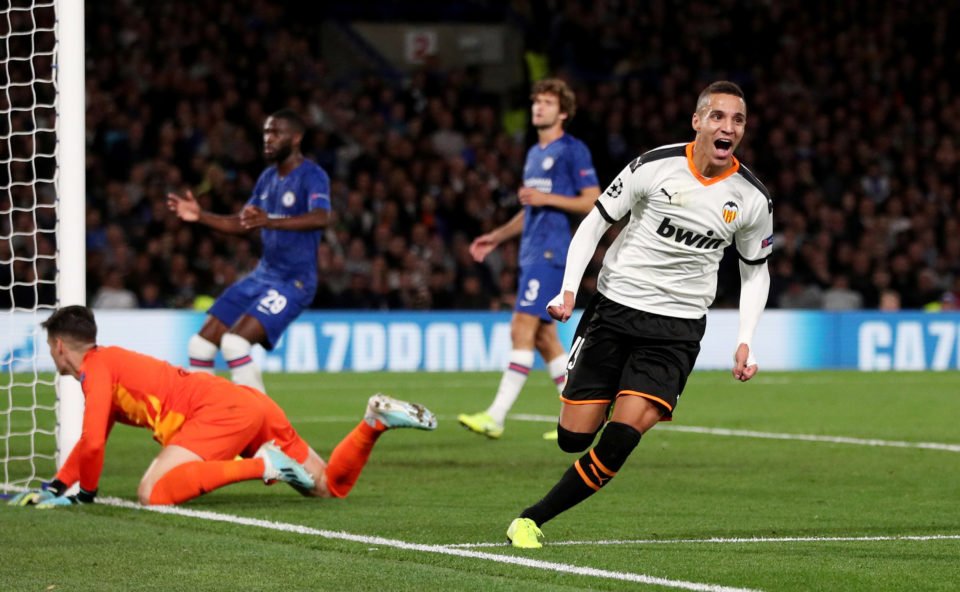 The Blues, trailing to a goal from Valencia winger Rodrigo, were given a lifeline in the closing stages when VAR flagged up a handball in the area.

But Barkley’s spot-kick clipped the crossbar to condemn Lampard and his young side to a 1-0 loss in the Group H opener.

The Spaniards were supposed to be there for the taking, having arrived in west London in turmoil following the sacking of popular boss Marcelino last week, a move which has angered the players as well as the fans.

But they did not play like a team on the verge of mutiny and had too much nous for Lampard’s beginners, four of whom were making their Champions League debuts.

Lampard, who played 102 Champions League matches forChelsea and captained them to their 2012 triumph, was perfectly placed to impart his experience of playing at this level to his youngsters – but it could still be a steep learning curve this season.

Tammy Abraham, fresh from his hat-trick at Wolves, was denied a maiden Champions League goal when his near-post flick was blocked by Valencia keeper Jasper Cillessen.

Fellow rookie Mason Mount then received a painful introduction to Europe when former Arsenal midfielder Frances Coquelin left his studs on the inside of the youngster’s shin.

It was a nasty challenge which only earned Coquelin a yellow card, but after trying to play on Mount’s match came to a premature end after 14 minutes.

Abraham went close again with a far-post header from Cesar Azpilicueta’s cross and Willian’s powerful run through the middle only produced a shot which flew wide.

Willian, Chelsea’s biggest threat in the first half, almost fashioned a spectacular opener when he controlled Mateo Kovacic’s crossfield pass on his chest, but his first-time shot flew over.

And on the stroke of half-time the Brazilian’s fierce drive towards the near post was parried clear by Cillessen.

Marcos Alonso took the game to Valencia early in the second half, drilling in a free-kick which Cillessen tipped behind before heading the resulting corner over.

But in the 74th minute they fell behind, Rodrigo giving the Chelsea defence the slip as he raced onto Daniel Parejo’s chipped free-kick and swept the ball past Kepa Arrizabalaga.

The drama reached fever pitch five minutes from time when Chelsea’s players appealed for a handball, and replays did indeed show Fikayo Tomori’s header had struck the hand of defender Daniel Wass.

After an interminable VAR delay a spot-kick was finally given but Barkley, on as a substitute just seven minutes earlier, took responsibility only to crash his effort against the frame of the goal.

Our View: Parents have finally woken up to the blackmailing by teachers’ unions