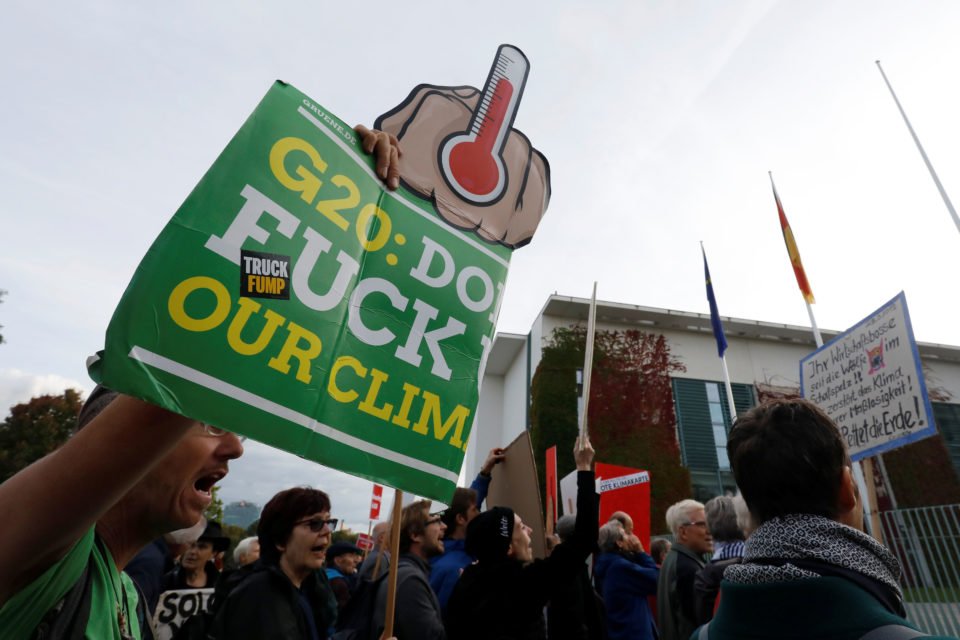 Protesters show placards and shout slogans related to climate politics at the chancellery in Berlin.

As world leaders begin arriving for a summit at the United Nations on accelerating action to address climate threats, adults are planning to join students in an unprecedented wave of youth-led climate protests on Friday, organizers said.

More than 1,000 strikes are planned across the United States and some 5,200 globally in more than 150 countries, said Alexandria Villaseñor, co-founder of the U.S. Youth Climate Strike movement, and May Boeve, head of climate group 350.org.

The protests will mark the first time adults are joining student strikes on a significant scale, likely giving them added numbers, publicity and impact, organizers said.

“Expect tomorrow to be the largest global mobilization in climate action that has ever been seen in history,” said Swedish climate activist Greta Thunberg, 16, on Thursday.

Thunberg will lead the protest in New York City, which is allowing children to miss school, joined by labor union activists and others, Villaseñor said.

“We need everyone,” she said. “Make your voices heard.”

Protesters are demanding an immediate end to expansion of fossil fuel infrastructure and that major producers of climate-changing emissions be held accountable for damages, he said.

They also want stronger efforts to spur transitions to renewable energy with opportunities for workers who may lose their jobs in fossil fuel businesses, Villaseñor said.

“We are expecting world leaders to take bold climate action to give us the stable climate system that is our right as young people,” she said.

About 60 countries and a range of businesses are expected to ramp up pledges of action on climate change during the summit called by United Nations Secretary-General Antonio Guterres.

Rachel Kyte, the U.N. secretary-general’s special representative for sustainable energy for all, said the surge in climate street protests in the last year has been a major driver of changes in public attitudes around the world.

Polls show “public opinion is shifting very strongly in favor of aggressive climate action, even in countries where political leadership may not be aligned with that interest,” she said on Thursday.

Protests by student climate strikers and Extinction Rebellion protesters, for instance, led Britain’s government this year to declare a climate emergency and put in place a goal to achieve “net zero” emissions by 2050.

Kyte said new public pressure has led people from finance ministers to pensioners to seek ways to shift their actions to cause less climate damage.

There is less interest in turning profits and seeking long-term returns by investing in heavily carbonized technologies and more interest in pursuing clean technologies, she said.

“People are asking questions and voting their shares. The system is beginning to edge in the right direction,” Kyte said.

Lois Young, Belize’s ambassador to the United Nations and a representative of the Alliance of Small Island States, said marches in big financial centers such as New York and London were likely to be most effective.

“They are the movers and shakers of the world,” she said.