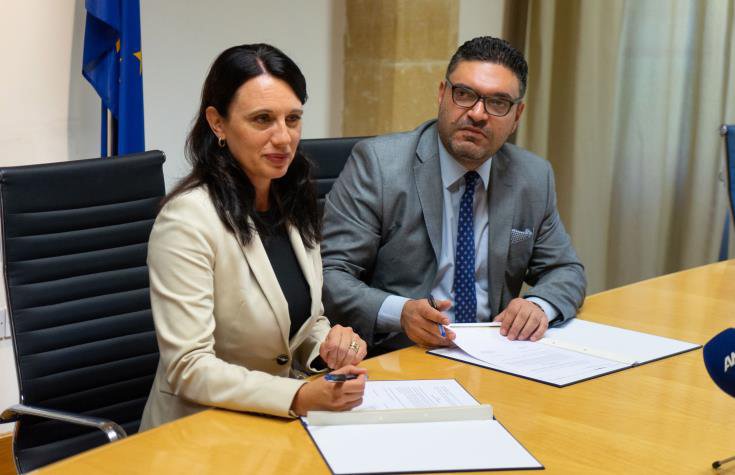 Cyprus on Thursday signed a permanent hosting agreement with the European Asylum Support Office (EASO), the first EU country to do so in order to speed up asylum applications.

The agreement was signed between Interior Minister Constantinos Petrides and Nina Gregori, the EASO director-general in Nicosia.

Petrides described the agreement as “a very important step towards tackling the migration problem facing Cyprus” as the island could no longer handle it alone.

The minister said only days ago that Greece and Cyprus, which is currently receiving the highest number of asylum seekers per capita, would be demanding a new migration policy from the EU next month.

By the end of July this year, a total of 7,812 new asylum applicants were registered in Cyprus, an unprecedented increase of over 130 per cent in comparison with 2018.

In 2017 alone the increase in asylum applications in comparison with 2016 was over 50 per cent higher. In the same trend, 2018 demonstrated a further sharp increase in migratory flows, this time 69 per cent higher than the previous year.

According to the EASO, for the third year in a row, Cyprus remains the top receiving member state per capita.

Petrides said Cyprus was the first EU country to sign and implement a permanent agreement with the EASO, which will be headquartered in Nicosia but will operate other offices as needed.

The government has been receiving ad-hoc help from Easo in recent years, but Petrides has repeatedly said the Cyprus asylum service cannot cope with the numbers and applications are years behind, which puts a strain on other government services while asylum seekers wait to be processed.

Under the new plan, the aim is to reduce the backlog in applications by 25 per cent in 2019 and by 50 per cent in 2020 based on the assumption that arrivals will remain stable and EASO capacity is reinforced.

“The agreement provides for the expertise and numerical presence of EASO experts needed in Cyprus so that we can begin to implement the accelerated application process in the best possible way,” Petrides said.
According to the minister, EASO will provide €4.5m exclusively to Cyprus under the agreement, increasing the number of experts involved in the registration and management of international protection applicants, from 20 to 40 within 2019 and from 40 to 80 within 2020.
“The agreement will contribute to the introduction of an expeditious procedure for the examination of international protection applications, which will both speed up the examination procedures but will also prevent the abuse of the system,” said Petrides.  It also provides for training for asylum staff.

The EASO support programme will be revised and strengthened as needed, he added.

In her comments, Gregori said Cyprus and the EASO shared the same goal, “which is no less than a speedy process across Europe and helping people at risk and those who have been waiting for asylum for a long time”.

“Our cooperation will help in many ways. This agreement is very critical,” she said, adding that aid would be by 2020.

EASO, she said, would be present at all stages of the process of receiving an application, registering applicants, identifying vulnerable cases and taking part in interviews,  but all decisions would ultimately be up to in the Republic of Cyprus.