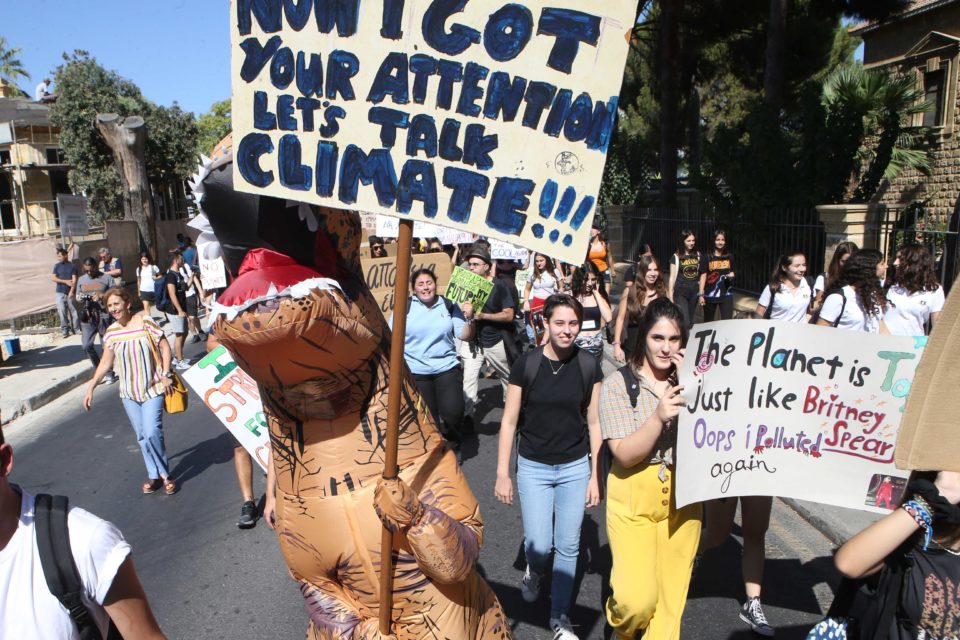 Hundreds of students protested on Friday outside the ministry of energy against climate change and the use of natural gas that is expected in 2021 in Cyprus.

The protest march was organised by Youth for Climate, an independent movement of active youth founded in March inspired by Swedish teen Greta Thunberg’s initiative to demand politicians’ attention to the issue.

Led by the head organiser of Youth for Climate, Nicolas Mouros, students gathered at the House of Representatives and marched to the ministry where they stayed for one hour protesting for system change and climate justice.

Holding banners and chanting slogans, the protest began with clear rules: “No littering, no verbal or physical violence”.

Students shouted against global warming to unite their voices with those in another 150 countries who also marched on Friday, demanding effective measures against climate change.

“We skipped our lesson to teach you one” was one of the slogans students used, saying that neither Cyprus nor student body was too small to make a change.

“A 16-year-old girl in Sweden called Greta Thunberg managed to raise awareness in millions of people when she started skipping school on Fridays to protest against climate change,” said Mouros, a recent school graduate himself.

Marchers attempted to take over only the left line of traffic and tried to walk on the pavement, blocked however by illegally-parked cars.

When the protesters reached the ministry, they explained why they demand a change to the system. “The European Union asked for all the member states to make an action plan to reduce greenhouse gas emissions to 45 per cent by 2030 but Cyprus’ action plan has a goal of only 24 per cent,” Mouros said.

They also demanded that the authorities listen to the scientists, who predict a 4.5C degree rise in Cyprus temperature ranges by 2050, and to take immediate measures, proportional to the size of the climate crisis.

“Officials told us not to moan about natural gas because it will bring us money. What can we do with money when we will not be able to breathe,” Mouros told the Cyprus Mail.

“We want the authorities to try and hold their breath while they count their money and see how long they can live without breathing. We are protesting for our basic needs; clean air and water,” he added. “It is ironic that a country with so much sunlight and resource on solar energy wants to use natural gas”.

Youth for Climate wanted to send the message: “Wake up, get educated and act”, because every citizen needs to change their lifestyle, along with the authorities.

When an official from the ministry came outside to ask why the protesters were there, Mouros said it was a basic human right to protest against injustice. “We are a thousand people here if the minister wants to come, he is only one person against all of us,” Mouros replied.

Protesters lay on the ground  pretending to be dead for five minutes for all the victims of climate change like the climate refugees in India, people in Bangladesh who lost their homes due to floods and all the whales that were found dead with plastic in their stomachs.

Mothers Rise Up, and Friends of the Earth also went to support the protesters, together with students from the special school and some from Limassol who travelled by bus.

“It is the voice of reason becoming louder. So many years we have been reading about the climate crisis and we were getting desperate because nobody was doing anything about it. Now with the global movement, we think that there is an opportunity to make things better for this planet,” Anastasia Korai, the chair of the board of Friends of the Earth Cyprus told Cyprus Mail.

Many students, as well as mothers who support their children’s initiative,  gave speeches during the protest, addressing both the students but mainly the authorities.

“There are times in history where being silent is a crime. This is one of those times” said Ioli Damaskinou, a member of Mothers Rise Up, a movement started in the UK that began activism in  Cyprus last May.

Damaskinou also founded Eco Mums Cyprus to educate mothers and help them make environmentally-friendly decisions. “Mothers make up to 90 per cent of consumer decisions in households and we have an incredible amount of power if we learn to use it together,” she said.

Maria Georgiou, also a member of Mothers Rise Up, in an attempt to bring the ministry of energy staff to join the protest said: “Stop looking at us like we are aliens. It is your children out here. No air-conditioning will fight the heat that is coming. Just do your job!”

Another protest for climate justice is taking place next Friday where many organisations will unite their voices for a radical system change. People will gather outside of the Supreme Court at 5pm and walk to Eleftheria Square.