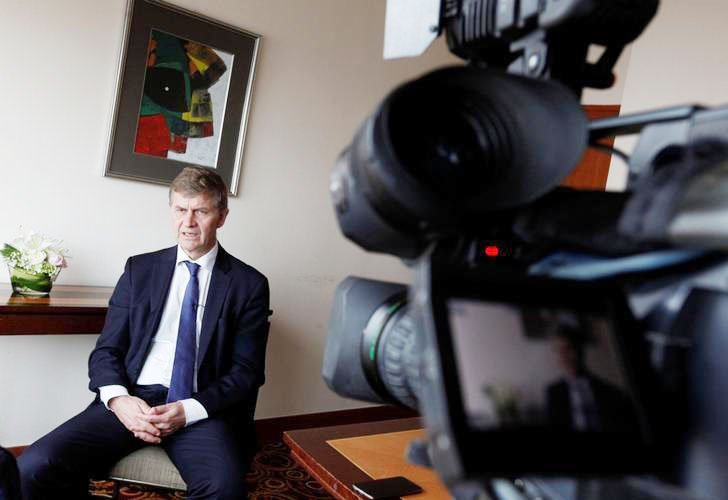 Last year, under pressure from member states, the head of the UN Environment Programme, Erik Solheim, stepped down amid criticism of his travels

More than 1,000 United Nations employees have called for the global body to reduce its carbon footprint, including through curbs on their own diplomatic perks like business-class flights and travel handouts, a letter obtained by Reuters showed.

The United Nations calls climate change the “defining issue of our time” and is hosting a New York summit on it next week. But reformers within say in the letter addressed to Secretary-General Antonio Guterres that it needs more radical change to get its own house in order.

“Our commitments need to be more ambitious and at least as concrete as those of the UN Member States and non-party stakeholders attending the UN Climate Action Summit,” said the letter, signed by more than 1,000 employees. It was organised by a group called Young UN, an internal network committed to ensuring the organisation embodies the principles it stands for.

“As Greta Thunberg just sailed across the Atlantic Ocean and young people across the world continue to strike every Friday, let us look at our own impact and take bold steps to address the climate emergency,” the letter said, referring to the Swedish teenager who has inspired global climate strikes.

The United Nations, a 75-year-old institution employing 44,000 people in more than 60 countries, emitted 1.86 million tonnes of carbon dioxide equivalent in 2017, its own data show. That equates to a carbon footprint larger than several of its member states, including Malta and Liberia, according to statistics from the Global Carbon Atlas for the same period.

Among 10 issues identified by Young UN are travel allowances, which the letter said needed to be cut or scrapped “in order to disincentivize travel by UN employees and UN meeting participants motivated by financial gain”.

Allowances, or per diems as they are known internally, are intended to cover travel costs including food and accommodation, and can exceed $400 a day for some locations such as New York, according to the International Civil Service Commission website.

The letter also suggested that staff should be rewarded for downgrading from business class, where a spacious seat generates several times the emissions of an economy class ticket.

Travel accounts for nearly half the United Nations’ emissions, its data show. Last year, under pressure from member states, the head of the U.N. Environment Programme, Erik Solheim, stepped down amid criticism of his travels.

Other reforms recommended in the letter include a complete divestment of the more than $60 billion U.N. pension fund from fossil fuels and creating offices run entirely on renewable energy. Young UN did not respond to requests for comment.

Guterres is seeking to combat climate change from within in order to boost sustainability. A spokesman for his office was not immediately available for comment.

The letter welcomed Guterres’ internal strategy but said it “misses the urgency of the crisis we are facing”.

The United Nations has also launched a “Greening the Blue” initiative which measures the U.N. system’s greenhouse gas emissions, waste disposal, fresh-water use, and environmental management. According to its latest report, 43 of its entities or just over a third were carbon-neutral in 2017.

But the letter raises doubts about U.N. offset mechanisms, a method that works through purchases of U.N.-certified carbon credits from approved green projects and is widely used by organisations and businesses to tout their green credentials.

This echoes criticism from NGOs about the contribution of offsets to sustainable development.

Isabella Marras, Sustainable UN Coordinator, whose team produces the Greening the Blue report and was a signatory to the letter, said she saw scope for the United Nations to give even greater attention to environmental considerations.

“What we are missing is the aggressive integration of environmental issues into our programmes like the UN has done for women,” she told Reuters. But she stressed some of the pragmatic challenges in regions where environmental standards are less strong than in Western countries.

Marie-Claire Graf, a 23-year-old Swiss climate activist visiting the U.N. European headquarters in Geneva, said the number of U.N. vehicles in vast carparks overlooking the lake and mountains was surprising.

“The UN is doing some amazing things on environment but I am shocked by so many SUVs and the amount of travel,” said Graf, who was selected along with 100 young climate leaders to attend the U.N. Youth Climate Summit on 21 September.

“The UN needs to lead on this transformation.”

Kasabian singer: ‘I needed to sail to new lands’

Woman dies in Protaras after being pulled unconcious from the sea