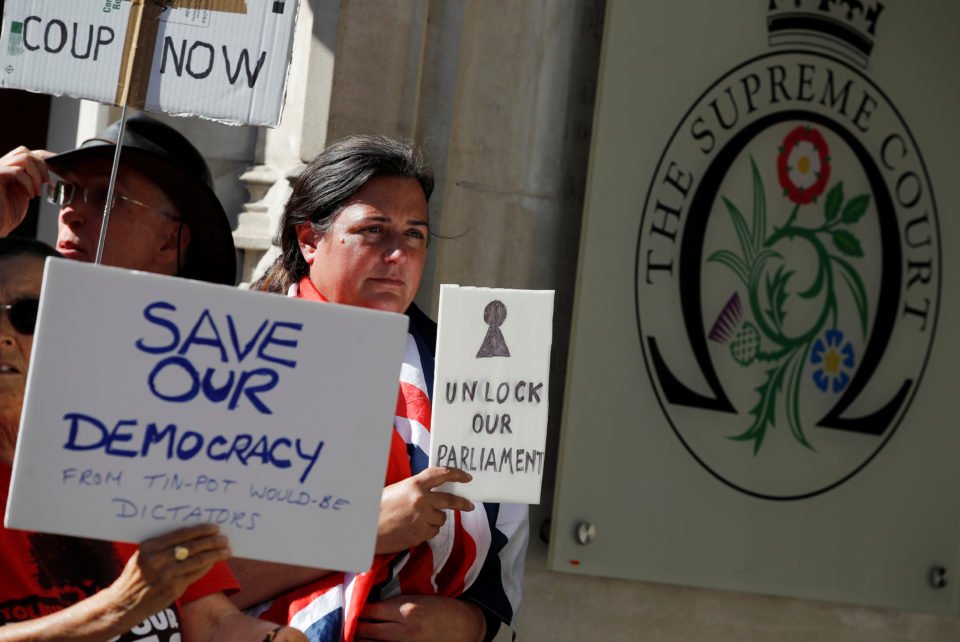 An extraordinary appeal took place last week in the UK Supreme Court about the separation of powers and the supremacy of parliament.

The Supreme Court used to be known as the House of Lords and sat in the same building as the Houses of Parliament at Westminster until it removed across Parliament Square to Middlesex Guildhall. The previous arrangement was in keeping with the idea of the crown in parliament as the source of executive, legislative and judicial power in Britain.

The distribution of power between monarch, parliament and the judiciary as practised in England after the Bill of Rights of 1689 was the inspiration behind the seminal treatise De L’Espirit Des Lois 1748 by the French political philosopher Baron de Montesquieu that established the overarching principle of the separation of powers as a constitutional bulwark against tyranny.

The allocation of different powers to different arms of government with checks and balances between them is now accepted as the model to adopt in democratic states – primarily because it dilutes power that would otherwise be open to abuse if concentrated in the hands of one person or institution.

The specific problem faced by the Supreme Court last week was whether it had jurisdiction to judicially review the decision by the prime minister to suspend parliament for longer than usual. And if so whether to hold that it was done for an improper purpose or had the effect of unlawfully preventing parliamentary scrutiny of executive action.

The UK is a constitutional monarchy without a written constitution contained in a single document. This means that there is no document to consult for the answer to either of the questions, so counsel made submissions based on statutes and precedents going back to the 16th century in search of constitutional principle.

The most exciting speech was made by the fearless Aidan O’Neill QC on behalf of a group of MPs from Scotland who closed with the memorable  “the mother of parliaments was shut down by the father of lies” to make good his submission that Boris Johnson, the British prime minister, suspended parliament to stymie parliamentary scrutiny and lied to cover up his true purpose.

But I am afraid the question before the court is politically far too sensitive for Mr O’Neill’s eloquence to carry much weight.

Stripped of all inessentials the problem the court has to confront is whether in a democratic society it is confident it can review an elected executive exercising a check on parliamentary scrutiny, where such scrutiny may be impeding the democratic will of the people, and retain its reputation for independence and impartiality afterwards. That in effect is the undercurrent the Supreme Court will have to navigate next week. It is a very delicate issue to which, as the president of the Supreme Court, Lady Hale, said there is no easy answer.

In accordance with the principle of separation of powers, decisions involving proceedings in parliament are normally forbidden territory for the court except where parliament has itself legislated inroads into its procedures or there is a clear precedent authorising the court to intervene.

On the other hand, there are fundamental principles such as the supremacy of parliament and the need for parliamentary scrutiny that may provide the court with a standard by which to judge the executive in political matters.

Still it is virtually unheard of for the UK Supreme Court to be asked to adjudicate between the executive and the legislature. After all the executive may have suspended parliamentary scrutiny in line with the democratic wishes of the majority of the British people as it perceives them to be.  And the people’s wishes may not be in line with the wishes of parliament. For ultimately in a democratic country it is the will of people not that of parliament that is sovereign.

Judges are appointed on the recommendation of an appointments commission on the basis of their ability and experience, and their commitment to justice and the rule of law in a democratic setting. Their independence and impartiality have not been seriously tested hitherto because their function has been concerned with the determination of legal and factual issues between citizens in private law and between citizens and the state in public law.

But this case is different; it is political at every level. There is a political conflict between parliament and the majority of the people who voted to leave the EU. The executive is politically committed to leaving the EU by October 31, 2019 and took a decision to prevent parliamentary scrutiny in order to leave the EU in accordance with the democratic wishes of the majority.

In the absence of a clear and strong precedent it would be a bold judiciary that enters a political minefield such as Brexit. The only role the court has is to decide the limits of its jurisdiction on the facts before it.

It would be wrong for the court to posit an absurdly long suspension of parliament to help it decide whether it has jurisdiction in principle. The Supreme Court cannot base such an important decision on an argument ad absurdum.

Like HM the Queen her judges should give the clash between the executive and parliament over Brexit a wide berth for one simple reason: they do not have the political authority or the tools to judge it.