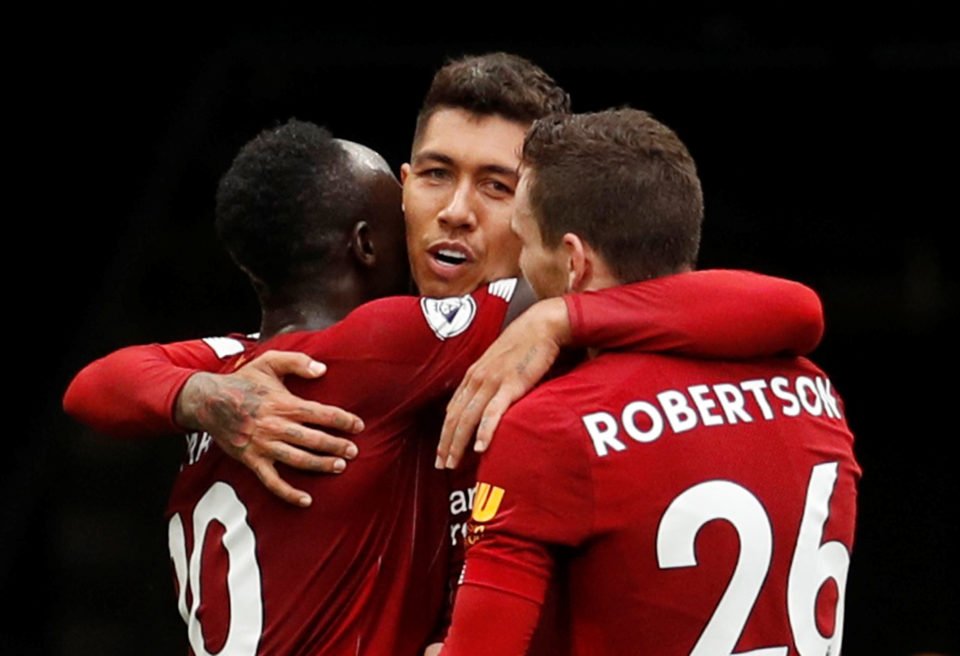 Liverpool maintained their searing pace at the top of the Premier League as they beat Chelsea 2-1 at Stamford Bridge on Sunday to make it six wins from six matches.

A day after second-placed Manchester City’s 8-0 demolition of Watford, Liverpool were made to work much harder but hung on after first-half goals by Trent Alexander-Arnold and Roberto Firmino had put them in control.

N’Golo Kante reduced the arrears after the break but Chelsea remain without a victory at home under manager Frank Lampard.

Arsenal moved into fourth spot as they twice came from a goal down with 10 men to beat Aston Villa 3-2 at the Emirates thanks to Pierre-Emerick Aubameyang’s late free kick.

Wolverhampton Wanderers are still winless in six Premier League games but at least avoided defeat at Crystal Palace as Diogo Jota struck a stoppage-time equaliser in a 1-1 draw.

Liverpool, whose serene start to the season was jolted by a midweek defeat to Napoli in the Champions League, were not at their best, especially in the second half, but dug in to extend their club-record run of Premier League wins to 15.

They lead City by five points with Leicester City, who beat Tottenham Hotspur on Saturday, in third on 11 points. Arsenal and West ham also have 11 points.

Chelsea are one of six clubs on eight points along with Manchester United and Tottenham.

Liverpool took the lead in the 14th minute when Alexander-Arnold rifled the ball into the top corner after Mohamed Salah back heeled a free kick into his path on the edge of the box.

Chelsea thought they had levelled but were denied an equaliser by VAR after 26 minutes when Cesar Azpilicueta bundled the ball in only for replays to show that Mason Mount had strayed a fraction offside in the build-up.

To add insult to injury to the hosts Firmino then headed in Andy Robertson’s cross from the left.

Chelsea showed great spirit following the break and after Kante’s superb curled effort, they had chances to level through Mount and substitute Michy Batshuayi.

“We scored two wonderful goals and we could have scored directly after halftime two more,” manager Juergen Klopp said. “We deserved the three points, it is a difficult to win here.”

“Performance wise we were the better team. We had more energy in our game, character and spirit,” he said.

Lampard said the VAR decision, one of several to overturn goals over the weekend, had been a turning point.

“It changes the atmosphere in the crowd, on the pitch. We are slightly deflated and they get a boost. We deserved to be level at that point,” Lampard said.

Nicolas Pepe equalised from penalty spot on the hour after midfielder Matteo Guendouzi was fouled in the area by Björn Engels but Villa restored their lead immediately through Wesley.

Calum Chambers replied again for the hosts in the 81st minute before Aubameyang then pounced to complete a remarkable win for Unai Emery’s side.

Ukrainian forward Andriy Yarmolenko put West Ham ahead against United at the end of a drab first half at the London Stadium and Aaron Cresswell sealed victory with an outstanding free kick in the 84th minute.

To complete a bad day for United, who are already 10 points behind arch-rivals Liverpool, they lost striker Marcus Rashford to a groin injury that manager Ole Gunnar Solskjaer fears could sideline him for “a while”.

Talking points from the Bundesliga weekend