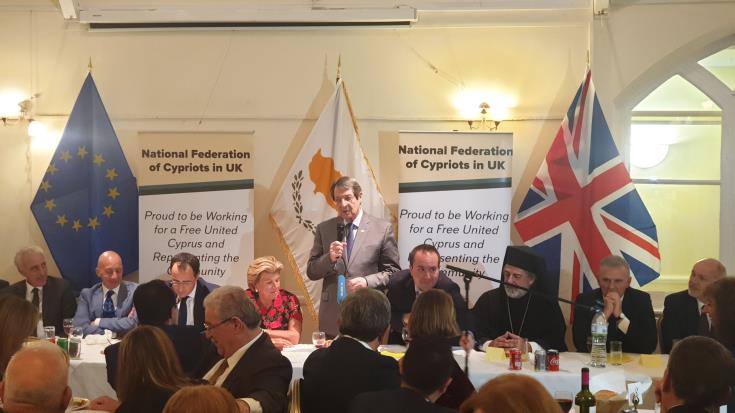 President Nicos Anastasiades said that just as he is determined to engage in an honest and creative dialogue, he is equally determined to never do so until Turkey ceases its illegal and provocative activities.

Speaking on Saturday night at a dinner organised in London by the UK’s national federation of Cypriots, Anastasiades said: “As determined as I am to enter an honest and creative dialogue, I am just as much determined to never enter a dialogue while Turkey carries on with its illegal activities, violating international law, or threatening to settle in Famagusta.”

“I am happy to say,” Anastasiades added, “that this is the unanimous position of all political forces,” noting that negotiations under the threat of new faits accomplis cannot take place.

It needs great patience to deal with Turkey’s provocations, Anastasiades said, adding that it is with patience that Cyprus is attempting to deal with the matter diplomatically, through the EU and through alliances with other countries, particularly with Greece.

August 9, when the leaders of the two divided communities shared a constructive meeting, “was a day of hope, where the expectation was raised that if there was reason and determination among the leaders, the terms of reference could be agreed upon, providing us with the opportunity to resume the dialogue from where it had ceased in Crans-Montana.”

Three terms of reference that could form the basis for the continuation of negotiations were agreed upon on August 9, Anastasiades said. The first was the joint announcement made in February 2014, the second was the convergences reached until Crans-Montana, and the third was the six-point framework laid out by the UNSG Antionio Guterres on June 30.

Encouraged, UN special envoy Jane Holl Lute arrived on the island with a document she had prepared based on the positive information received by the two leaders, which was fully accepted by both sides, Anastasiades said, though the Turkish Cypriot leader Mustafa Akinci “had to delay his response for well-known reasons: he had to get approval, which did not arrive.”

Rather, Anastasiades went on, Turkey demanded that certain additions are made to the terms of reference, which in effect imposed from the onset the issues of political equality and effective participation, that were to be discussed on the negotiating table.

As a result, Lute “had failed, in one sense, in her effort to establish the terms of reference.”

“We recognise and accept political equality – what we reject is political inequality. Because what Turkey is demanding through a positive vote for the Turkish Cypriots on all issues, is nothing but a right to a veto,” Anastasiades added, recalling that he has repeatedly asked his interlocutors to present one such example “where one community has such rights that enable it to determine the fate of the other.”

Anastasiades also referred to the meeting between Antonio Guterres and Mevlut Cavusoglu, the Turkish Foreign Minister, in New York, expressing hope the Turkish official did not insist on the preconditions set by Turkey to agree on the terms of reference.

Referring to his upcoming contacts in New York, such as the meeting with the representatives of the five permanent Security Council member states, Anastasiades said he will convey his determination for a new start which would enable the creation of peaceful coexistence and a functional and viable state.

However, the President noted that conditions which undermine the efforts to build a functional and viable state or provide the right to a third country on how Cyprus will be governed are “unacceptable and inconceivable.”

He also noted that during his address to the UN General Assembly he will deplore Turkey’s illegal actions, that violate international law.