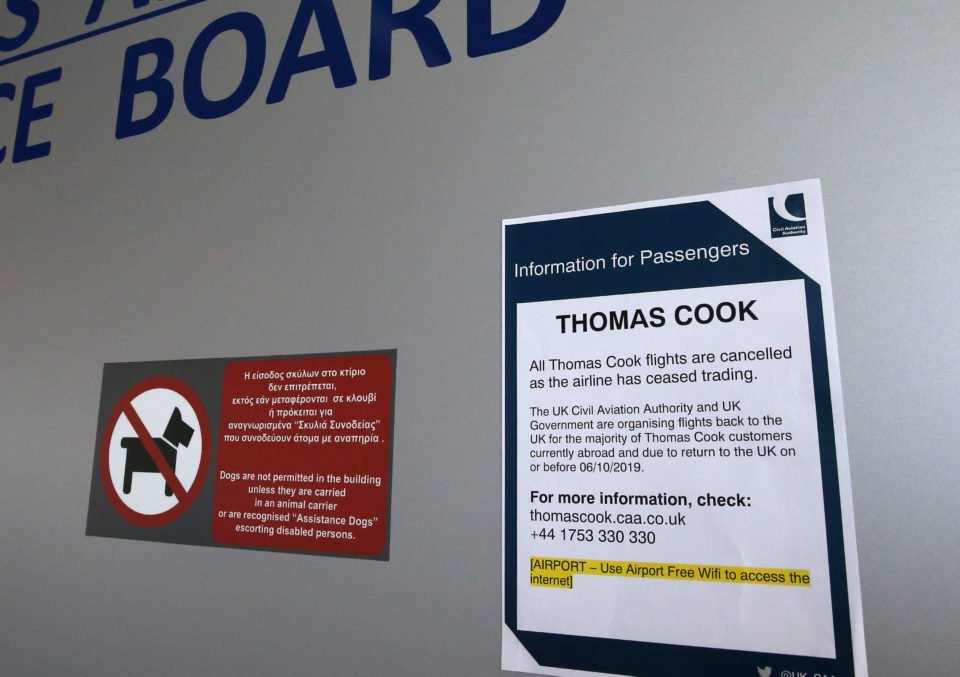 Not only did 15,000 passengers in Cyprus lose their flight out after the collapse of Thomas Cook, but the cost to the island’s tourism industry in the short to medium-term will be a hefty 250,000 visitors, close to €200m in revenues and €50m in unpaid bills that are due to hoteliers.

It will also mean a general rise in air fares by other airlines in the short term as was seen with the collapse of a number of companies in recent years.

Deputy minister for tourism Savvas Perdios painted the grim picture after a crisis meeting Monday morning with all industry stakeholders. “It’s a pretty severe blow to tourism in Cyprus,” he said.

“Thomas Cook brought in 5 per cent to 6 per cent of arrivals and maybe even more if we consider overnight stays,” he added. “If we consider that each visitor to Cyprus spends around €750, we can perceive the size and importance of this tour operator,” he added.

Some 8,000 of the 15,000 stranded Thomas Cook customers who were due to fly out this week are currently stuck while arrangements are being made to fly them out. It may even take up to two weeks to accommodate all 15,000 who had bookings.

Four rescue flights have already been arranged to transfer stranded passengers back home, according to a source from Hermes Airports, the company that runs Larnaca and Paphos airports.

Perdios said the nationalities that needed to be repatriated were 50 per cent British, 40 per cent Scandinavian and the remaining 10 per cent Germans. There are also Cyprus residents, mainly in the UK who also flew there with the airline.

Those in Cyprus who booked hotels but not flights to the island with Thomas Cook, which was a tour operator as well as an airline, will have to foot their own hotel bills until the date of their flights home with other companies. These can be recouped under travel insurance with their banks or credit-card companies, hoteliers said.

Around 45,000 Thomas Cook bookings for the remainder of the year must now be discounted in terms of arrivals and revenues, plus there is also likely to be a huge impact on 2020 bookings from the UK, which accounted for one third of all four million visitors last year.

And, the collapse comes on top of uncertainty over Brexit, which has prompted many Britons to hesitate booking a holiday for 2020.

Perdios said his ministry had been preparing for the possibility of Thomas Cook’s demise for days since there were rumours of a collapse and had already made concrete plans to deal with the situation.

Attending Monday’s meeting were representatives of the foreign ministry, the transport ministry, police, the Cyprus Hotel Association, the Association of Cyprus Travel Agents, and airport operator Hermes, among others.

“We called this meeting chiefly to ensure the safety of visitors and to ensure that those involved in tourism will do what they can for them. At least they should leave with the best impressions possible,” Perdios said after the meeting.

“At this moment the only ones who have serious problems are hoteliers because they offered services in July, August and even September for which most have not been paid. There is a big possibility that this money, about €50 million, will be lost. I want to be honest, it won’t be easy to recover,” the minister said.

The chairman of the Cyprus Hotel Association (Pasyxe), Haris Loizides said that at some hotels the bookings from Thomas Cook amount to 70 per cent to 80 per cent while at others the operator had reserved all of their rooms.

“Therefore the problems for these hotels are huge as they lost their income for July, August and September,” he said.  “But on top of that, they have no bookings as of today until the end of the season.”

Loizides said the most important thing at the moment was to manage the customers staying at the hotels. Even though Britons’ travel home has been arranged, for Scandinavians and Germans “the landscape is still a bit cloudy”, Loizides said.

Asked whether the situation would see hotels close down, Loizides said there was no justification to create panic. “We hope that solutions will be found,“ he said.

Akis Vavlitis, the president of the Association of Cyprus Tourist Enterprises (Stek), which represents a group of four and five-star hotels, said that normally the hoteliers would receive payment by the end of October, November and January “so the €50 million we calculated has been lost,” he said.

“There are hotels that have lost hundreds of thousands and those who have lost millions so some colleagues are in a very difficult position but we won’t ask the government for anything, we’ll find some other ways,” he added.

Perdios said there were many other tourist destinations worse hit than Cyprus by the Thomas Cook collapse, adding that the company did have a bigger share of the Cyprus market in the past.

“I think one of the great achievements of Cyprus in the last five years has been that we have succeeded in developing relationship with various tour operators so that we do not depend on only one [large one],” he said.
On an expected hike in ticket prices in general as other airlines seize the opportunity, Perdios said: “It is expected in the coming weeks that there will be a rise in prices.”

As far as filling the gap left by Thomas Cook in the longer-term, Perdios said his ministry had planned ahead for a difficult year in 2020 in any event irrespective of what just happened.
“We hope that a large proportion of the arrivals lost in the case of Thomas Cook will be regulated by the market, that is, other British tour operators or German or Scandinavian. Exactly what percentage this will be cannot be known at this stage,” Perdios said, stressing the important of developing new markets.

The Cyprus Chambers of Commerce and Industry (Keve) said the development was extremely negative. “The large number of job losses will have a direct impact as this month is a busy month for our hotels, but the problems are expected to extend into the coming months, perhaps in the coming year,” Keve said.

The president of the Association of Cyprus Travel Agents (Acta), Vasilis Stamataris told the Cyprus Mail: “The fact that this happened at the end of summer in September is not a consolation.”