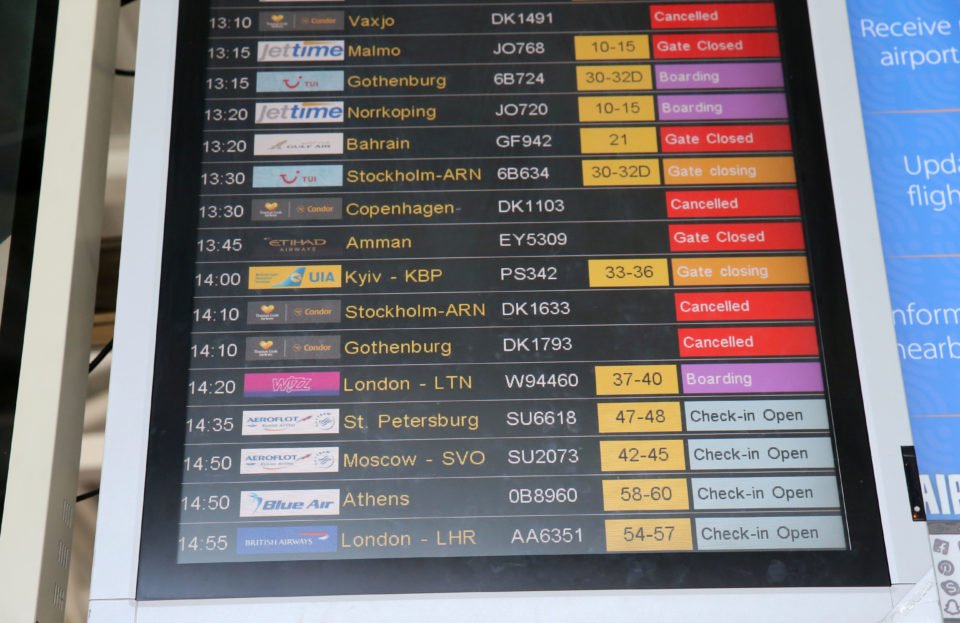 List of cancelled flights at Larnaca airport on Monday (CNA)

Thomas Cook provided seat capacity of 456,000 for 2019 on its flights to and from Larnaca and Paphos airports to the UK, Scandinavian countries and Germany.

This equates to approximately 230,000 passengers flying in and out of the island of whom 185,000 have already been and gone prior to the collapse.

Had it survived, Thomas Cook would have carried an additional 45,000 passengers by the end of the year.

Currently, there are around 15,000 Thomas Cook customers in Cyprus, 8,000 of whom were to fly out this week. They include both tourists and Cyprus residents.

Overall, the Thomas Cook Group accounted for 4.1 per cent of annual passenger traffic at Cypriot airports.

On Monday seven flights to and from Scandinavian airports and Larnaca were cancelled and one flight from Paphos to Manchester.

Hoteliers estimate their losses for the months of July, August and September this year at €50m in unpaid bills by Thomas Cook.

Some hotels had deals with Thomas Cook for 70 per cent to 80 per cent of their rooms. Some let out their entire hotel to the operator.

Thomas Cook brought in round 5 per cent to 6 per cent of tourist arrivals either through their flights or hotel deals or both.