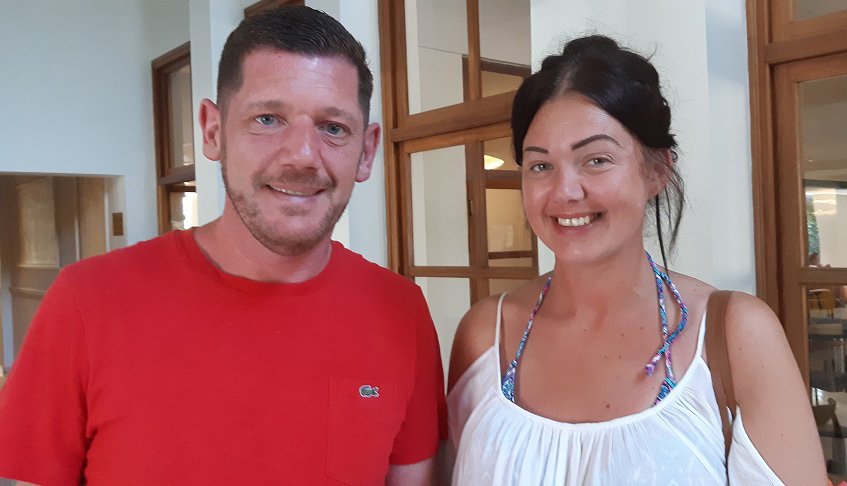 Darren and Adele are due to fly home tonight

British holidaymakers in Paphos affected by the collapse of tour operator Thomas Cook expressed their concerns on Monday ahead of repatriation flights, including running out of medication, airport transfers, and where they will land once back in the UK.

“We came on a Thomas Cook plane and are due to go back to the UK on Wednesday, but we don’t have any information about our flights yet. We also only have enough of our medication, (Thyroxin and morphine patches), to last until then, so it’s worrying us. We don’t know if the chemist here would give more to us,” holidaymakers Irene and Eric, who are due to fly to Newcastle, told the Cyprus Mail on Monday

The pair added that the uncertainty has ‘overshadowed the holiday a bit’, however they praised the Paphos hotel where they are staying for their care and quick dissemination of information.

“They called a meeting for us all this morning and assured us that no-one will be thrown out or anything like that and just to continue our holiday.”

The elderly pair added that they hope a flight list displayed in the foyer will be updated in the morning with their new flight details. They are also concerned that any rescheduled flight might be landing elsewhere, such as Manchester, and not Newcastle.

“We are also concerned about our transfers from the hotel to the airport as we came by a taxi from Larnaca. We are hoping to fly from Paphos airport, but we don’t know about that yet.”

“We flew in from Newcastle and have people meeting us back home. We don’t drive, so I don’t know how we will get home if they take us to another airport. I’m a worrier and it’s really concerning me,” said Anne.

Darren and Adele arrived in Paphos last Monday night from Manchester. It was a Thomas Cook holiday but they flew on a Easyjet flight and are due to leave on Monday night.

“We believe that our flight will be OK as they said that the flight is not going to be affected, but if the transfer doesn’t arrive at 7pm tonight, we will have to get a taxi of our own and try to claim that back once we get home.”

The couple voiced concerns that their flight might not materialise at all.

“What would we do then, would we come back here or what? You don’t know what to believe until the plane is on the runway and taking off? The rep wasn’t here this morning, she must have lost her job, such a shame.”

Despite their feelings of uncertainty, the pair have had a lovely holiday and would visit Paphos and the hotel again.

Euripides Loizides, spokesman of the Paphos hoteliers’ association said that people should carry on their holidays as usual as flights and transfers will be sorted out.

“Experience from the past says that usually people fly back the same day, although the time may change. We want to keep holidaymakers happy so they come back. People don’t have to worry about returning home and that includes their transfers as well,” he said.

Loizides Paphos hotel has 260 units and 80 rooms are booked out through Thomas Cook which is 30 per cent of the capacity, he said.

The industry is going to experience a ‘big shock’ and hoteliers are owed a lot of money.

“There is a loss of between 45 and 50 million euros outstanding to the hoteliers so you can imagine that this will go from their cash flow, it will be hard to survive and then there is the bigger picture.”

He noted that as Thomas Cook is the second largest tour operator in Cyprus it carries a huge volume of passengers from the UK, and that its collapse is drastic.

As with all other hotels, Loizides has upcoming bookings and customers will either have to find different flights to Cyprus or get a refund.

“We are hoping that a big percentage will still come but ripples from the collapse of Thomas Cook will be negatively felt in Cyprus for years to come.”