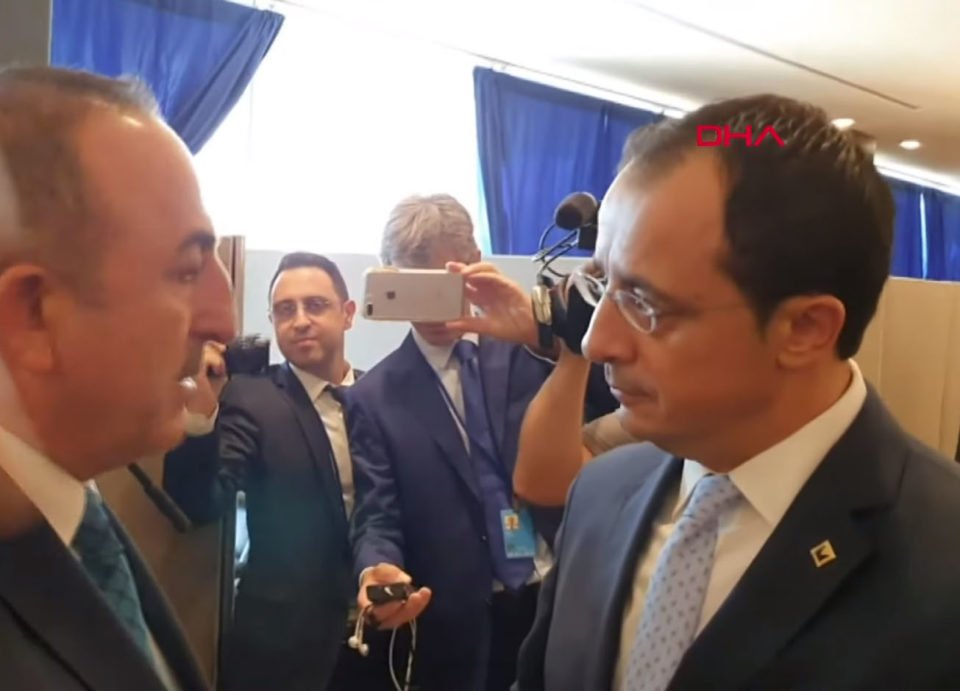 Nicos Christodoulides and Mevlut Cavusoglu during their chance encounter

Video footage of the chance encounter between the Cypriot and Turkish foreign ministers in New York made the rounds of social media on Tuesday showing Melvut Cavusoglu telling Nicos Christodoulides that President Nicos Anastasiades had referred to alternative solutions in the presence of Christodoulides himself, and also asserting: “I have the minutes.”

The foreign ministers appeared to have bumped into each other on Monday as Christodoulides was about to meet the Greek foreign minister, and just as Cavusoglu was speaking to reporters.

According to the audiovisual documentation, the two began sparring, surrounded by numerous reporters.

In the video, Christodoulides appears eager to get Cavusoglu to agree that the sticking point between the two leaders on agreeing the terms of reference for new talks could be overcome without a five-party meeting as Turkey has suggested.

Cavusoglu responded that such an informal meeting was necessary, as “first we need to agree on what we are going to talk about”. He referred to discussions he had last year where Anastasiades allegedly spoke of possible solutions involving a confederation and a two-state solution. The president has denied he suggested a two-state solution.

Christodoulides replied: “We know what we are going to talk about, there is only one solution, the bizonal bicommunal federation, forget two states and a confederation.”

Cavusoglu retorted that “last time, in front of you [Christodoulides], your President told me…”, after which Christodoulides cut him off, categorically denying what was to come with multiple ‘no’s.

“I have the minutes,” Cavusoglu said. Christodoulides replied: “We have also the minutes.”

Christodoulides then said: “Remember that the President was…” but cut his sentence short, saying “anyway, the press has come.”

Christodoulides then asked Cavusoglu to shake hands and officially agree that a BBF was the only solution on the table. The Turkish foreign minister stated this remained unresolved.

According to Turkish Cypriot media on Tuesday, prior to his departure for New York on Monday the Turkish Cypriot leader Mustafa Akinci said that “even though the statement of two recognised states” in Cyprus sounded good “it is not a development which could happen in the foreseeable future.”

Referring to the failed attempt by UN envoy Jane Holl Lute earlier in the month to secure an agreement between the two leaders on the terms of reference that would form the basis for a resumption of negotiations, Akinci stressed that the reason behind the failure was that Anastasiades “continued his negative stance on the issue of effective participation” of Turkish Cypriots in decision-making processes.

“The Turkish Cypriot people are no one’s minority,” Akinci stressed. “If a partnership is going to be established, it is important to decide together in the fields of competence of the partnership… Only in this manner is it possible to conclude the terms of reference.”

Addressing the UK’s national federation of Cypriots in London on Saturday night during his stopover on course to New York, Anastasiades laid all weight for the failure of Lute’s efforts on the Turkish Cypriot and Turkish side, claiming that though Lute had arrived on the island encouraged, she left without results due to Turkey’s demand that the issues of political equality and effective participation were added to the terms of reference document.

“We recognise and accept political equality – what we reject is political inequality. Because what Turkey is demanding through a positive vote for the Turkish Cypriots on all issues, is nothing but a right to a veto,” Anastasiades said, recalling that he has repeatedly asked his interlocutors to present one such example “where one community has such rights that enable it to determine the fate of the other.”

Akinci said that Anastasiades’ “statements in London were offensive. Political equality is a sine qua non for us”.