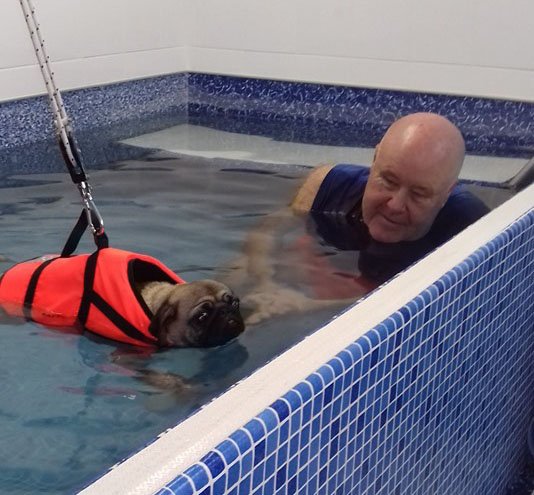 Dog owners are being invited to enter their canines into a sponsored dog swim due to take place in Paphos next week.

The event will raise money for ‘Alex’s Farm of Strays,’ a non-profit organisation, and dogs entered into the event will swim in a dedicated hydrotherapy centre in Paphos.

Organised by ‘Aquapaws Cyprus,’ the longer the dogs swim for, the more cash will be raised for the organisation, said Gaynor Warriner. In the pool, the dogs swim wearing a flotation aid for buoyancy and they are also hooked up to a hoist which helps them to remain swimming on the spot.

“People can get in touch, collect a sponsorship form and bring their dogs along to our pool where they will swim on the spot wearing a flotation jacket. Whatever funds are raised we will give to Alex’s farm of strays, they are doing such a good job,” she told the Cyprus Mail.

Supporters may also sponsor a dog of their choice if they don’t have one of their own, she said.

Each dog will be given an individual and allocated time slot to complete their swim. So far, ten owners have signed their pets up. They include crossbreeds, a pug, two Labradors, a retriever and two Cavalier King Charles Spaniels.

Alex’s farm of strays was set up by a Paphos based animal lover Alex Kyriakidou, whose priority is saving stray, abused and neglected dogs in Cyprus and rehoming them.

Alex takes unwanted dogs with a raft of issues, including advancing years, health and behavioural problems and the expenses are overwhelming.

“On average per month we need €2,500 for food and €1,500 euros for medical care. We also save dogs from government pounds that are on a death row. Euthanasia is a forbidden word to us.”

The charity swim is also good for the dogs. Warriner pointed out the benefits of hydrotherapy for canines and said that it was ideal for post-op and pre-op dogs as it builds muscle mass. It’s also great for arthritic dogs as its non-weight bearing.

“Hydrotherapy is a really good way to help all sorts of dogs with a variety of issues and also if they are overweight,” she added.

The facility was built by husband Chris and is in Timi, close to Paphos airport. The couple is experienced in dog hydrotherapy and ran a similar unit in the UK for a number of years.

Since starting up last year, three dogs that are using the facility and were unable to walk for a variety of reasons are vastly improved and are now mobile.

The sponsored dog swim week will start on Monday, September 30 and conclude on Friday, October 4

Is a transgender man who gives birth a mother? Yes, says UK court