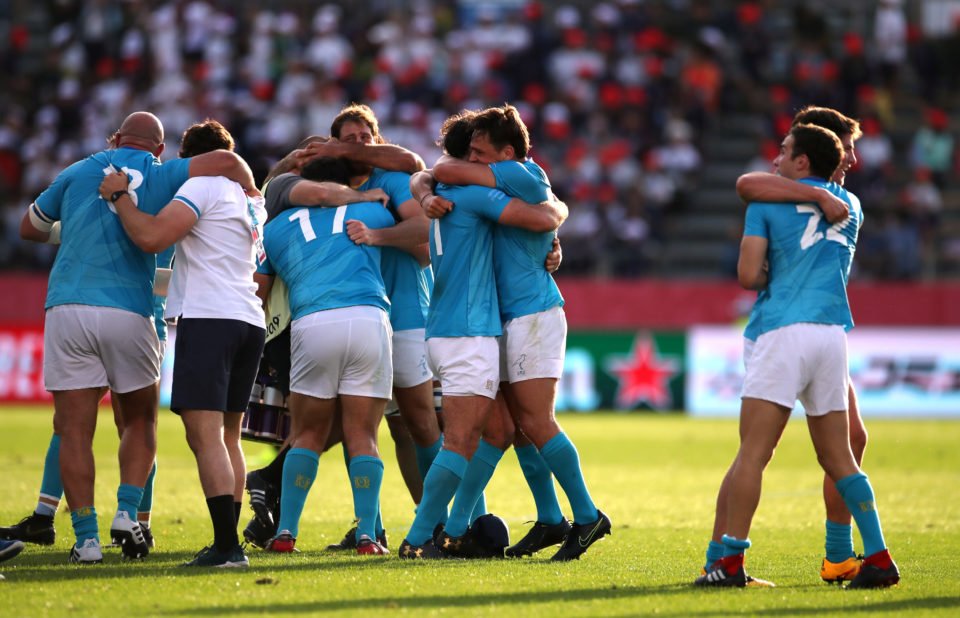 Uruguay delivered the first upset of the Rugby World Cup with a stunning 30-27 victory over a fatigued and error-prone Fiji in a thrilling Pool D match at the Kamaishi Recovery Memorial Stadium on Wednesday.

While not ranking as high in the shock stakes as Japan’s victory over twice-champions South Africa at the 2015 World Cup, it was every bit as deserved and the Uruguayans, many in tears, danced with their small but vocal band of fans after the final whistle.

Uruguay’s only previous World Cup victories had come against Spain and Georgia, making Wednesday’s win their biggest scalp in the small Japanese seaside town of Kamaishi, which was devastated by the 2011 tsunami and earthquake.

“I’m really proud of my country, we’re not the biggest, we’re not the tallest but we came here to win,” said emotional Uruguay captain Juan Manuel Gaminara, draped in the flag of his country.

“We’ve been preparing for four years for this, I’m really proud of my country. We never had anything granted, we always have to qualify. You saw the passion. I’m really proud.”

The South Americans, mostly amateurs, led 24-12 at halftime on the back of converted tries from scrumhalf Santiago Arata, number eight Manuel Diana and centre Juan Manuel Cat as well as a penalty from Felipe Berchesi.

Berchesi, whose 15 points was a record for a Uruguayan player at a World Cup, kicked two more penalties in the second half to keep the scoreboard ticking over and lead Los Teros to only their third victory in 12 World Cup matches.

“Can I tell you a little secret? Yesterday I missed pretty much all my kicks so I had trouble sleeping,” said a beaming Berchesi.

“I haven’t realised anything… It is still a dream and it is still sinking in.”

Even if they earned a losing bonus point, the upset leaves Fiji’s hopes of reaching the World Cup quarter-finals for the first time since 2007 in tatters after they also lost their opening match to Australia on Saturday.

“The guys made critical errors that gifted them tries. In the first half we turned the ball over too much on the edges but we really believed we could get back in the game.”

“We’ve got to get ourselves off the floor now and make sure we’re ready to play Georgia in eight days times. That’s a critical game for us.”

Fiji, who had been relaxing at the beach to recover from the disappointment of their loss to the Wallabies on Saturday, started well against the 19th ranked Uruguayans.

A neat lineout move saw hooker Mesulame Dolokoto open the scoring in the seventh minute but Arata soon pounced on a turnover to juke his way under the posts.

Fiji returned to the forwards for their second try when prop Eroni Mawi dived over from one metre out on 18 minutes and the Pacific islanders looked like they might motor away from opponents they crushed 47-15 in the pool stages four years ago.

The Uruguayans had other ideas and tries from Diana and Cat rocked the Fijians with Berchesi adding his first penalty to send them into the break with a useful lead.

Fiji responded with a try from lock Api Ratuniyarawa, who barged over the line seven minutes into the second half but Josh Matavesi missed the extras and a subsequent penalty.

Regular flyhalf Ben Volavola was brought on to steady the ship but it was Uruguay who scored next with Berchesi extending their lead to 10 points with 20 minutes remaining.

Fiji finally started to play some free-flowing rugby and were rewarded when substitute scrumhalf Nikola Matawalu crossed over with 14 minutes to go to set up a dramatic climax.

Uruguay were defending desperately but just when it looked like the Fijians might manage to reel them in, Berchesi was presented with another chance from the tee, which he nailed.

“I tried to imagine I was kicking in an empty stadium,” he said.

Fiji kept battering away at the exhausted men in blue shirts but when Matawalu finally crossed for his second try after the fulltime gong had sounded, it was too little, too late.

“The main differences between us was our team effort,” Berchesi said.

“They (Fiji) have really good individuals and are really strong in the one-on-one but we played well together as a team and that is our main strength.”

Uruguay will need to count on that collective spirit for the match against Georgia in Kumagaya in four days time.

UEFA tells teams not to play where women can’t watch