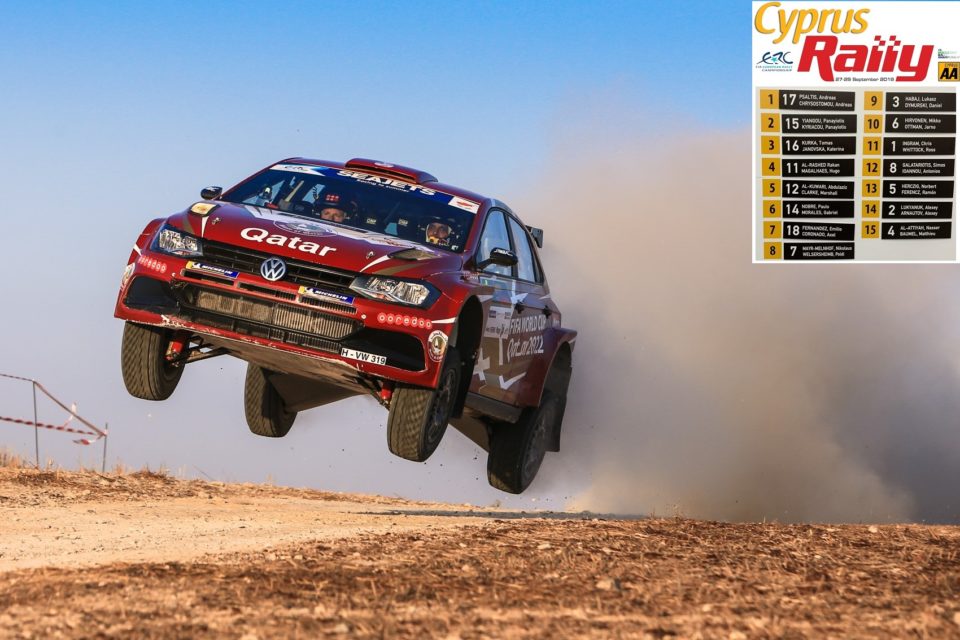 The 2019 Cyprus Rally got underway on Friday with the qualifying test in the morning and all the razzmatazz of the ceremonial start on Larnaca seafront in the evening.

In bright sunshine, with a welcome breeze making things a little cooler, the teams gathered at Geri for the all-important qualifying stage, which determines the starting order when the rally proper gets under way on Saturday morning, as the fastest drivers got the chance to pick the position they will start on the road.

As expected, when the drivers assembled at lunchtime to pick their starting order, most of them chose a position as far down the field as allowed, so Al Attiyah will run 15th on the road on Saturday, followed by the fastest 14 other drivers. Only Andreas Psaltis bucked the trend, choosing the number one slot rather than the only other option – number 2.

Veteran rally driver Mikko Hirvonen, four-times a runner-up in the world championship, returns to the island for the first time in ten years. He told the pre-event press conference that he liked a challenge, and was just here “to have fun”.

He obviously doesn’t expect a podium: “I’ve been out too long! I’m going to have a good time and hopefully I can get to the finish,” he said.

Local hopeful – and last year’s winner – Galatariotis was frank: “anything is possible” he said, adding that “I cannot say we can compete neck-to-neck with these guys; rallying, especially in Cyprus, sometimes it’s about speed but also about endurance”.

The action takes place on Saturday to the south of Nicosia, and culminates with the Superspecial stage right in the centre of the capital, near the Cyprus Museum.

Three morning stages over 51km will be run in Politiko, Lefkara and Analiontas and then the teams head back to the Service Park by Nicosia’s police headquarters just after midday.

The afternoon loop repeats the first two stages of the day before a regrouping at the Service Park prior to the Superspecial, which starts at 5pm.

The final Leg starts on Sunday at 07.40, with crews heading into the mountains to tackle some of the ‘old’ rally stages at Kapouras, Kourdhali and Asinou. They will return to Nicosia for service just before midday, and then repeat the morning stages, arriving back at the service soon after 4pm, and finally heading to Larnaca’s Foinikoudes seafront for the finish ceremony and prizegiving at 6pm.

Parisians dine on calf’s head in tribute to Chirac