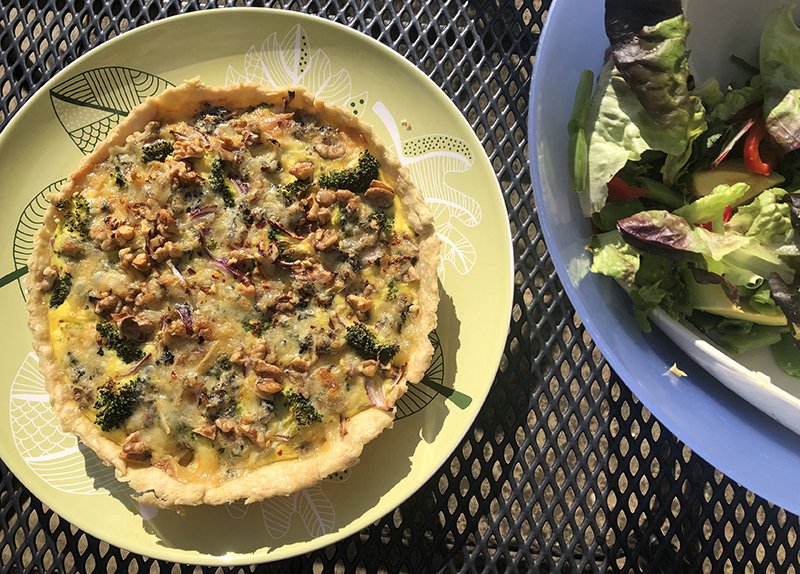 We’re always told that baking is a bit of a science (which was never my forte at school). Over-mix your batter and your child’s birthday cake might not rise, under-knead your bread and it’ll end up dense and tough, mis-measure anything and it’ll be a huge disaster. So it’s no wonder baking can seem kind of intimidating.

I cook, of course, but home-made cakes, biscuits, pastry and bread is something I’ve always steered well clear of. Yet with each year of Great British Bake Off contestants mixing, kneading and proofing to create impressive masterpieces, I’m tempted to give it a go too.
So, for the first time, I’m going to bake a cake…

Lemon drizzle
I start by seeking out the simplest-looking cake recipe on the planet – butter, sugar, eggs, flour, baking powder and lemon zest, from the Great British Book Of Baking – what could go wrong? I borrow a cake tin and a handheld whisk and on a Sunday afternoon, I meticulously measure out all the ingredients (it’s a science).

I pour it all into the cake tin, transfer to the oven, make the sticky lemony glaze – sugar, lemon juice and more zest – as instructed, and wait.

And then I get distracted and completely forget about it. I finally remember it’s in the oven 20 minutes after the instructions call for removing it. My poor lemon cake looked uncharacteristically brown on top.

After cooling, it’s a little hard around the outside, crusty on top, and all in all a bit drier than the desired result, but it does bear some resemblance to a lemon drizzle cake.

Welsh cakes
Not discouraged by my first attempt, I go for something even easier – Welsh cakes. You don’t even need an oven for these. Essentially, it’s self raising flour, a dash of milk, an egg, sugar and sultanas, hand-mixed in a bowl. I roll out the pastry (with a wine bottle) and cut out the round shapes with a glass.

Five minutes in the pan, flipping mid-way, and the first batch of little round spheres have puffed up slightly, with a nice golden crust too. I sprinkle some sugar on top and test them out on a Welsh person. “Exactly as they should be,” he says. Cha-ching.

Let’s ignore the fact I burned the next batch.

Quiche
Call it overconfidence, but next I decide to cook lunch for my family involving homemade pastry. A basic shortcrust is made of flour and half fat (thanks Delia), a pinch of salt and a dash of water, it should be crumbly and buttery, and years of watching Bake Off has drilled into me that there must not be a soggy bottom.

I discover it’s literally a case of working the butter into the flour – weirdly therapeutic – to create an even texture throughout, and using a tiny amount of water to bring the mixture into a ball that cleans the bowl. It’s surprisingly easy. I rest it in the fridge for 30 minutes in cling-film, before rolling out just larger than my quiche tin – it’s looking a little thin but I go with it.

I push it into the edges carefully, prick the bottom with a fork and blind bake for 15 minutes. I chop up my quiche filling – I’m going for broccoli, Stilton, walnuts and red onion – and whizz up a basic egg and cream mixture with some garlic and lemon zest.

The pastry comes out of the oven looking remarkably like pastry. I assemble my ingredients in the case, pour in the egg mix before it goes back into the oven for 30 minutes. The quiche, particularly the pastry, crumbly with a crisp bottom, is bloody delicious.

Will I be baking again?

I won’t be whipping up batter on a weeknight anytime soon, but I found spending a few hours on a Sunday baking surprisingly relaxing and therapeutic. There’s something special about baking that feels as if you’re making something out of nothing. And fresh out of the oven, even my beginner bakes (lemon drizzle aside) tasted better than most basic shop-bought ones, which is pretty satisfying. Plus, once you’ve got the basics in your cupboard, you can make so many things without needing a big supermarket trip.

After my first foray into baking, I find myself flipping through recipe books for do-able bakes, Instagramming my successes, online shopping for equipment and wondering if I should tackle bread next. There’s a whole big baking world out there to explore.

Maritime Cyprus kicks off next month

Actor-director is ‘the Pope’ of Cyprus theatre