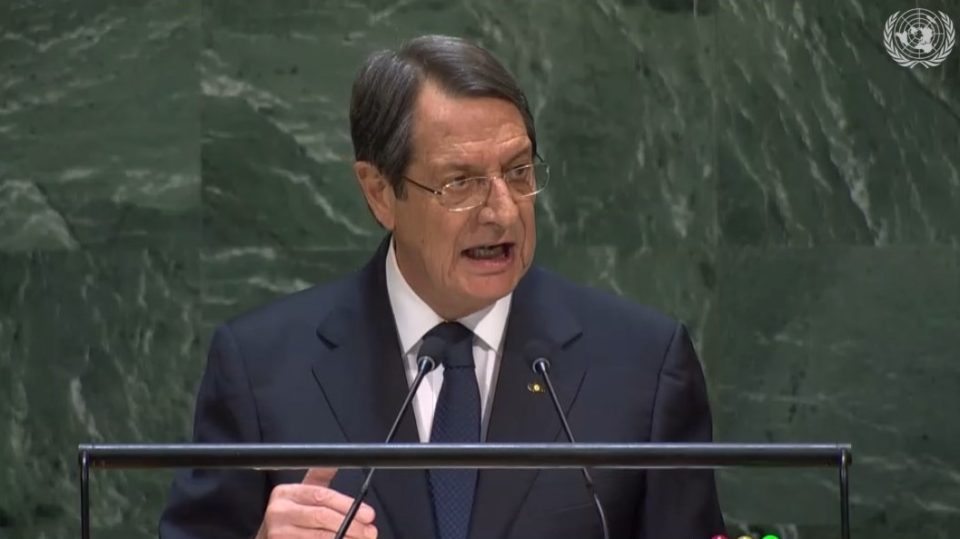 The fact that President Nicos Anastasiades failed to mention the rotating presidency in his speech to the UN General Assembly on Thursday showed he still has difficulty accepting the content of the Guterres framework, Turkish Cypriot leader Mustafa Akinci, has said.

In response to Anastasiades’ speech in New York, Akinci said in a written statement that there were some points that should be corrected. Firstly, he said, the Turkish Cypriots also have rights to the platform used by Anastasiades at the General Assembly.

“Unfortunately, the Greek Cypriot leaders have obtained this privilege since 1963 after the Turkish Cypriots were excluded from the 1960 partnership state,” he said.

On Anastasiades’ comment that both he and his predecessors had been trying for a solution for 45 years but it could not be reached, Akinci said that everyone needed to now that the Greek Cypriot side has never been willing to accept the Turkish Cypriot people’s views in a solution.

The two most important examples were the Annan Plan referendum in 2004 and the failed Crans-Montana conference in 2017, he said.

Akinci also pointed out that Anastasiades mentioned the UN chief’s June 30 document – the  Guterres framework – but did not mention the rotating presidency, which was an important article and indicator of political equality, he said.

“The fact that Mr Anastasiades did not refer to the 2:1 rotating presidency when he talked about the document of June 30, shows that he is still having difficulties in accepting the content of the framework,” he said.

“It is a big contradiction, and influences negatively the terms of reference to say on the one hand that he accepts past agreements and on the other hand to reject these principles,” said Akinci.

Responding on Friday, Government spokesman Prodromos Prodromou said political equality was not an issue for the Greek Cypriot side, as they had already accepted it as outlined in negotiations.  Prodromou said the Turkish Cypriot side had a different interpretation.

Main opposition Akel expressed the wish that Anastasiades would implement what he said in his speech. The Greek Cypriot side’s credibility and the future of the whole effort depended on the consistency Anastasiades “needs to exhibit first and foremost in his meeting with UN Secretary-General Antonio Guterres”, the party said.

For Diko, while Anastasiades’ references to Turkish violations and threats on Varosha were on the right track but his public acceptance of the framework for the terms of reference as the basis of the solution would lead “to a bad solution, “that of confederation”, which is Turkey’s standing policy,” it said. Edek echoed the Diko comment that the framework would lead to a dead-end, while Citizens’ Alliance said this was Anastasiades’ “first realistic speech” because he has said things that needed to be voiced internationally.

The Solidarity Movement, on the other hand, said their fears had come to pass because Anastasiades, while on one hand chastising Turkey for its aggressive behaviour, on the other, “he enthusiastically declares readiness to continue the talks for the solution of the Cyprus problem from where they left off in Crans-Montana.” The party said this showed that Anastasiades was unable to withstand internal and external pressure when it comes to Cyprus negotiations.

Also speaking out on Friday was veteran politician Constantinos Lordos who said Anastasiades speech was conflictual and was addressed more to the domestic extreme fronts in Cyprus rather than to members of the UN General Assembly “who are rightly having trouble understanding why the Cyprus problem remains unresolved for 56 years, since 1963.”

The former MP and Disy founding member said that the prerequisites for the solution of the Cyprus problem were good-faith dialogue, “at least on our part” and the submission of realistic approaches that could lead to a final solution.  “Instead, a confrontation is proposed and the reasons that support this confrontation are sought, instead of the reasons that will neutralise it,” he said.

The Cyprus problem can only be resolved through a sincere, honest dialogue aimed at finding a mutually acceptable, functional solution, Lordos said.  And, throughout the dialogue, both sides need to remember that when finding a satisfactory solution, they will have to become partners again for its implementation and its duration in the future.