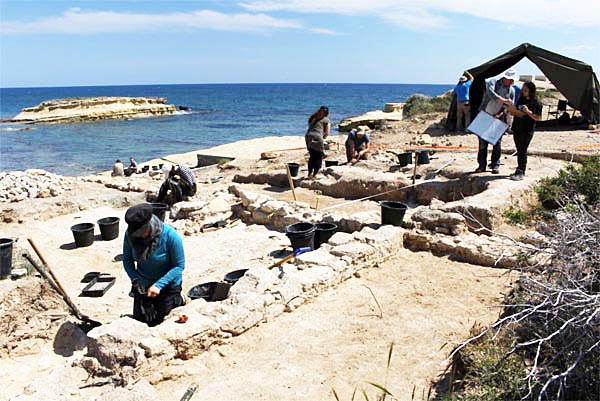 The excavation work has revealed warehouse complexes, harbour works, and shoreline stone quarries and there is also evidence of an ancient port site inside what is now RAF Akrotiri

Since 2015, archaeological teams from the University of Leicester and Southampton have being conducting excavation and survey work on Roman and early Byzantine remains at Dreamer’s Bay.

The excavation work has revealed warehouse complexes, harbour works, and shoreline stone quarries and there is also evidence of an ancient port site inside what is now RAF Akrotiri at the southernmost point of Cyprus.

Earlier this month, RAF Akrotiri Station Commander, Group Captain Chris Snaith, visited the site of the Ancient Akrotiri Project (AAP) to get an insight into the progress and complexity of the work being undertaken.

The Department of Antiquities, Ministry of Transport, Communications and Works, announced the completion of the land-based element of the AAP in April but the marine archaeological aspect of the project has continued.

The project is led by the University of Leicester under the direction of Professor Simon James and his professional excavation staff and undergraduate students from the university’s School of Archaeology and Ancient History, in collaboration with colleagues from the Universities of Southampton, Cyprus and Athens.

During his visit to the maritime project, the Station Commander spoke to lead marine archaeologist Dr Lucy Blue, who explained her theory of a tsunami-like event, several hundred years ago, which destroyed the breakwater and likely wrecked ships at anchor in the harbour.

Gp Capt Snaith said: “I’ve been lucky enough to go diving with the team from the University of Southampton which is looking at the marine archaeology in Dreamer’s Bay. They believe that ships from all over the eastern Mediterranean would use Cyprus as a logistic hub, much as it is today, getting re-provisioned before then sailing on to Syria, Turkey or wherever.

“We found columns which we think were on the way from Egypt en-route to Antioch.
“It’s fascinating, because the area has not been over-developed and we can restrict access, many of the artefacts are in pristine condition, which provides a great opportunity for the academics to come and study the area.”

In 2017, the Ministry of Defence’s prestigious Sanctuary magazine environmental awards committee presented the Ancient Akrotiri Project team with the runner-up award for the Heritage category.

The project itself is funded by the University of Leicester, the Council for British Research in the Levant, the Roman Society and the Honour Frost Foundation, with the support of the Bases authorities.

Thrills ahead in Cyprus Rally