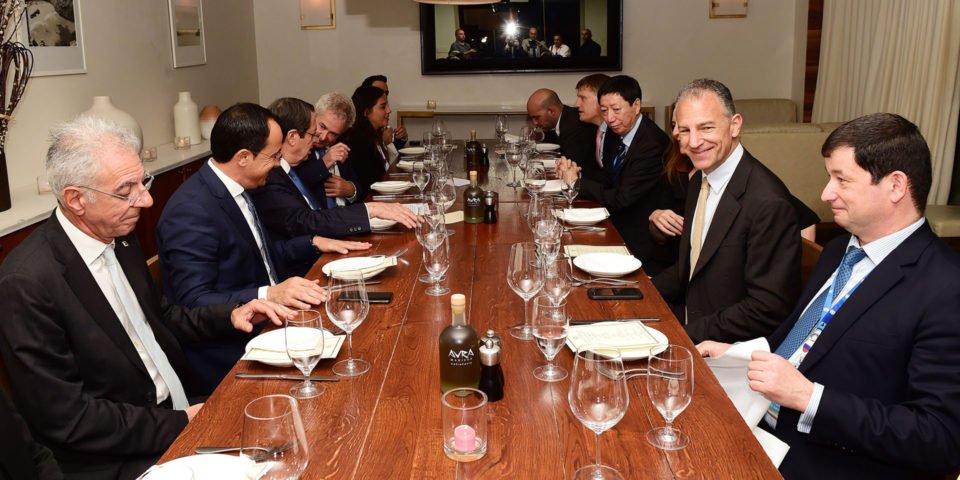 President Anastasiades meeting with representatives of the Security Council

President Nicos Anastasiades has informed the representatives of the five permanent members of the Security Council of the government’s intention to resort to the UN Security Council next week over Turkey’s moves concerning the fenced-off town of Varosha.

“I had the opportunity to brief them extensively regarding the Cyprus problem, the meeting with the secretary-general … the threats about Famagusta (Varosha) and our decision to resort to the Security Council so that it reaffirms its position on resolutions 550 and 789,” Anastasiades said, speaking after his meeting on Friday in New York.

The Turkish side has said recently that it planned to open the area, which has remained a forbidden military zone since August 1974 when its Greek Cypriot population fled from the advancing Turkish army.

UN Security Council resolutions 550 and 789 consider any attempts to settle any part of Varosha by people other than its inhabitants as inadmissible and calls for the transfer of this area to the administration of the UN.

Speaking to reporters on Friday evening following the conclusion of his meetings on the sidelines of the UN General Assembly, Anastasiades reiterated the Greek Cypriot side’s readiness to enter a dialogue in a bid to agree on the terms of reference that would lead to a resumption of substantive talks to find a solution.

He said the UN secretary-general appeared determined to engage substantively and depending on the outcome of his meeting with Turkish Cypriot leader Mustafa Akinci on Monday, he would convene a tripartite meeting in October to finalise the terms of reference.

“He also thinks convening an informal five-party meeting is something that would contribute towards a well-prepared resumption of talks so as to achieve results,” Anastasiades said.

He added that if Turkey and the Turkish Cypriots displayed a constructive approach then there would be prospects of resuming the talks from where they were left off in Switzerland in 2017.

Anastasiades said the basis for a solution of the Cyprus problem were the UN resolutions and the Republic of Cyprus’ evolution into a bizonal, bicommunal federation with single sovereignty.

“If they want to table something else from what is being discusses you do realise it is not up for discussion,” he said.

“If the other side insists on unacceptable positions it is their problem. What we seek is to secure the human rights of all citizens, Greek Cypriots and Turkish Cypriots, the interests of both communities, address the concerns of both, but not the concerns of one against the other’s interests,” Anastasiades said.

The president said he had never departed from the bizonal, bicommunal federal solution, arguing that his suggestion for a decentralised system was simply to avoid deadlocks.

Commenting on Anastasiades’ statement that the government will raise Varosha with the Security Council next week, Famagusta mayor Simos Ioannou told the Cyprus News Agency he was in constant contact with the foreign ministry.

“We expect to be officially informed over this matter,” Ioannou said on Saturday.

“We need to have an official conversation with the government about the discussions held on this matter during the president’s meetings with the UN secretary-general and the representatives of the Security Council’s permanent members.”

Dance is an Open House

‘Cut the cars, not the forests’

Teleconference between refugees and Unhcr highlights serious issues in Cyprus