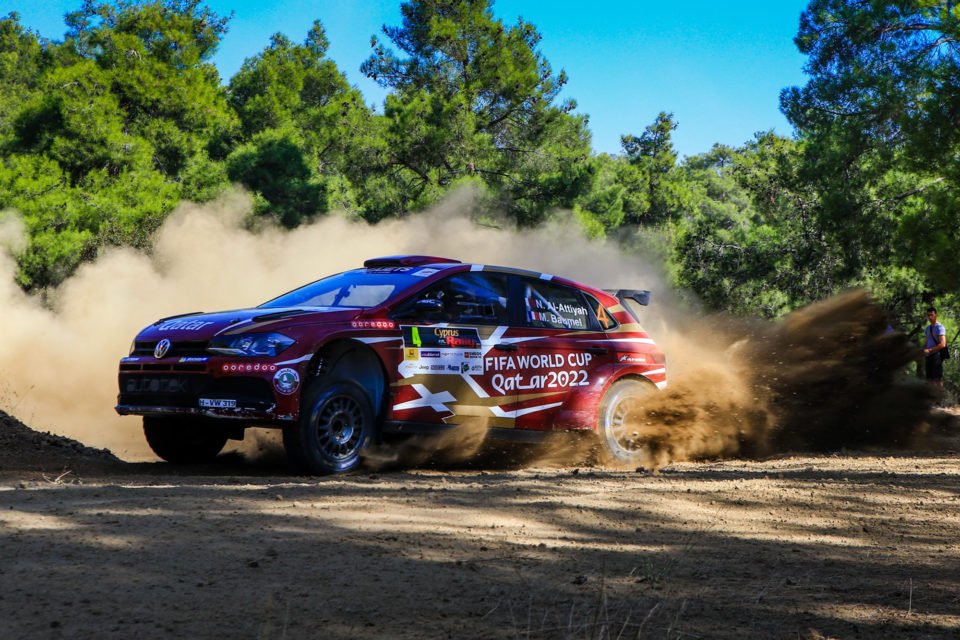 The 2019 Cyprus Rally, the penultimate round of the closely contested European Rally Championship (ERC), continued early Sunday morning with three special stages in the mountains south west of Nicosia.

Thirty nine of the original 43 crews set off on Leg 2, heading for the twisty, rock-strewn forest tracks near Asinou, and race leader Nasser Al Attiyah continued his consistent drive in his Volkswagen Polo GTI R5 to clock fastest on all three morning stages, extending his lead over Russia’s Alexey Lukyanuk to 50.9 seconds by the midday service break.

Britain’s young hopeful, Chris Ingram – who was leading the ERC rankings by a single point when the rally started, and taking part in Cyprus thanks to a crowdfunding campaign – had vowed after Saturday’s first Leg to set his car up for all-out attack in the hope of reeling in the two minutes and 10 seconds that separated him from Lukyanuk, who would move to the top of the ERC leaderboard if things stayed as they were.

With only Rally Hungary left on the calendar, Ingram’s hopes of becoming the first Briton to claim the ERC crown since Vic Elford in 1967 depended to a great degree on his result here: if the top 5 stayed the way they were at the end of Leg 1, he would go into the final event 9 points behind the Russian. “Way too conservative” was how he summed up his driving on Saturday in his effort to avoid damaging his Skoda Fabia “we were way, way too safe”.

Top five times over the morning stages failed to narrow the gap to leading Cypriot driver Simos Galatariotis who was holding 3rd overall, and Lukyanuk clocked second fastest on all three tests, arriving at the lunchtime halt over two and a half minutes ahead of Ingram although the Briton had slightly extended his lead over Poland’s Łukasz Habaj, the other contender for the ERC title. Mikko Hirvonen maintained his 6th place overall, and the top ten was rounded off by Mayr-Melnhof, von Thurn und Taxis, Fernandez and Al-Kuwari.

The Cyprus Rally is notoriously unpredictable, and it lived up to its reputation. Having held second overall throughout the event, Lukyanuk’s rally came to an end on stage 10 with an engine problem, and Ingram was promoted to 3rd overall – and a potentially much bigger points tally going into the final rally of the season. What’s more, Habaj was also having problems, and dropping further back.

The 25-year-old showed great maturity after hearing of the Russian’s retirement: “The two guys in front of us aren’t in the championship fight, so we need to be clever now,” he said. True to his word, he eased off on the last two stages, as did Al Attiyah – both realising that, barring disaster, they had the Finish in their sights.

And thus it ended: the Qatari clinched a record sixth victory on the Cyprus Rally, as well as the Middle East Rally Championship (MERC) title for the 14th time, equalling Mohammed Bin Sulayem’s record, while the young Briton extended his lead at the top of the ERC standings.