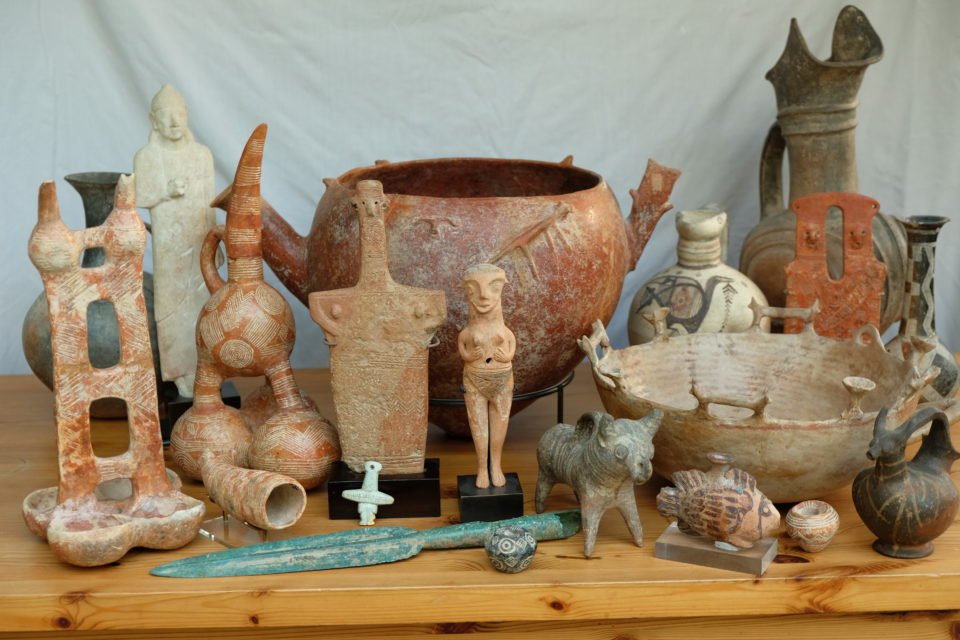 Some of David Johnson's collection

A British artist has signed over his collection of Cypriot antiquities to the museum of Kykkos Monastery after the intervention of Tasoula Hadjitofi, founder of Walk of Truth charity for the protection of cultural heritage.

The agreement was signed at the Dependency of Kykkos in Nicosia on Monday between the collector, David JD Johnson, Metropolitan Nikiforos of Kykkos and Tillirias and Hadjitofi, on behalf of “Walk of Truth”.

“At first I was wondering if I could give it to a museum in the UK. It did not take me long to realise that I must give it back to Cyprus and this was a kind of justice, a small restoration of what had been stolen,” Johnson, told the Sunday Mail, referring to his gradual realisation that although he had bought the artefacts from dealers, he felt they did not really belong to him.

During the ceremony, Johnson handed over to the Metropolitan a large Cypriot flagon from around 2100-2000 BC to mark his and Hadjitofi’s intentions for the repatriation of the 147-piece collection.

Most of the collection dates back to the Bronze Age (3rd century AD) with some pieces from the Early Iron Age (around 10,000BC). The pieces include figurines, vases, amphoras and flasks.

The collection is to remain complete and not dispersed and to be used for academic research, in which Johnson himself will contribute.

The repatriation will take place in stages over a period of several years to allow Kykkos Monastery the necessary time to create the proper space in its museum. The collector might continue to enlarge the collection during that time.

“It will be hard to be parted from my collection.  I have lived with it around me for a few years… the leaving of the last of them will be a wrench.  This is why I need a few years to get used to the idea,” says the 71-year-old collector.

The artist started collecting back in 2013 after purchasing some ancient coins from a museum he visited. “I had always been fascinated by time but I never intended to become a collector.”

After a few months he started buying only Cypriot pieces and started studying Cypriot history.

“I fell in love with Cyprus’ past before I had even seen her beautiful mountains or met her lovely people.”

In 2015, he came into money after selling his mother’s house, which enabled him to purchase more expensive pieces.

“I discovered a dealer online advertising antiquities, and I was lucky that he happened to be honest and very knowledgeable as he had studied archaeology at UCL. I learned a lot from him,” he said.

He has also bought pieces from major dealers, especially in the UK and from major auction houses.

Hadjitofi, meanwhile, has been recovering and repatriating antiquities looted from Cyprus for 30 years and in 2017 published a memoir about her quest called “Icon hunter”.  Originally from Famagusta, she settled in the Netherlands after 1974.

In 2011, Hadjitofi founded “Walk of Truth”, the non-profit organisation which aims to stop the illegal trade in artefacts and to raise awareness of law enforcement authorities of the destruction and illegal trafficking in cultural heritage.

The British collector had first heard about Hadjitofi’s work from a friend back in 2016 and came to learn that Cyprus was possibly the most looted country in the world for its antiquities and that collecting them can be ethically fraught.
“I try to discover provenance. Unfortunately dealers were slow to respond to the Unesco Accord, and even after it was signed in the UK in 2003 often did not preserve provenance. They still see preserving the privacy of their clients as their top priority, which causes problems for assessing provenance since names are often kept secret. This is extremely frustrating,” he said.

The Unesco treaty was signed to combat the illegal trade in cultural items.

Gradually persuaded by Hadjitofi’s campaign, Johnson asked for her help to find a suitable space to donate his collection and have it exhibited while he was alive and signed an agreement with her organisation in December 2018.

Johnson’s original idea was to donate the entire collection to the Cyprus Museum and he even visited the island for that purpose in 2016. However, discussions did not go well, and he changed his mind. Another possibility was to donate the collection to the Archaeology Research Department of the University of Cyprus, but the university finally decided they had insufficient room left in their display space.

“I know I don’t really own them, though. They will go on existing, many of them, I hope, in real museums, long after I do. I am a temporary, if slightly over-obsessive guardian,” he wrote on his website.

“We live only partly in the present moment because the present contains all the past and the imaginary future…for me antiquities are not aesthetic objects but containers of the past, of history, so I cannot conceive of owning them without wanting to study the archaeology behind them,” he said.

Hadjitofi invited Johnson to be on the advisory board of the “Walk for Truth” to shape the role of collectors and promote the ethical trade in antiquities.

Throughout the years, she has helped repatriate a number of frescos such as the one of Archangel Michael and Virgin Mary and Child from Antiphonitis Monastery that was in the possession of a Greek art collector.

She has praised David Johnson for his donation and calls on other collectors to do the same. “If you are a correct human being obeying human rights, you will find that answer within yourself just as David Johnson did,” she said.

For more information about the collection http://ant.david-johnson.co.uk/thumbnails/

Nostos programme to continue with focus on youth