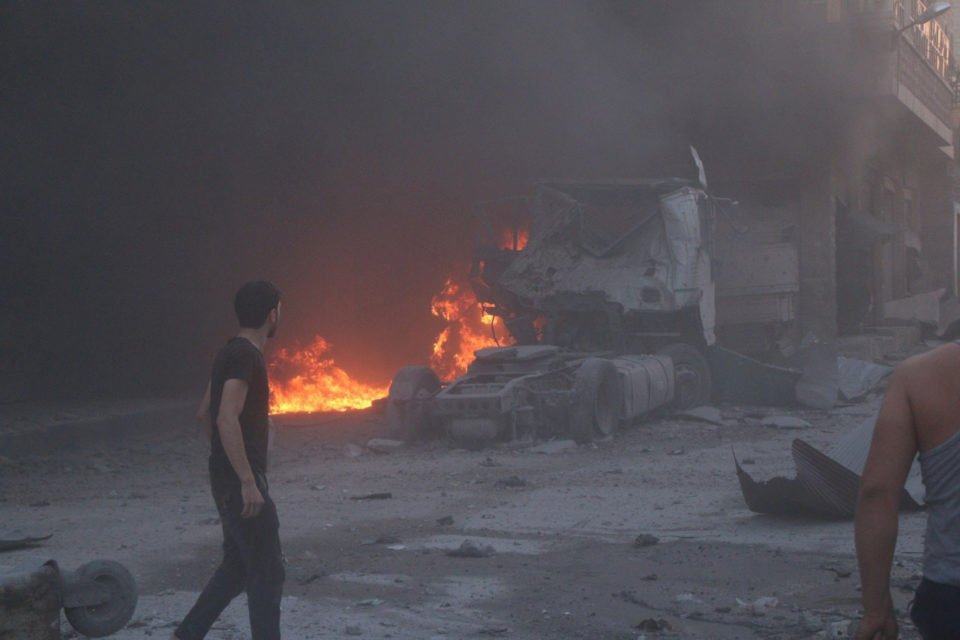 People walk next to fire, debris and a damaged truck after a deadly airstrike, said to be in Maarat al-Numan, Idlib province, Syria August 28, 2019. Picture taken August 28, 2019. Syria Civil Defence in the Governorate of Idlib/Handout via REUTERS ATTENTION EDITORS - THIS IMAGE WAS PROVIDED BY A THIRD PARTY. NO RESALES. NO ARCHIVES. MUST NOT OBSCURE LOGO. MANDATORY CREDIT.

If no solution is found, the troubled Syrian province could turn into an Al-Qaeda caliphate

Idlib is bleeding. Radical Islamists, who lost the war in Syria, are trying to retain power in the country’s north-western province at the cost of civilian lives. This is the final obstacle to attaining peace in the country.

Brett McGurk, US Special Presidential Envoy to the coalition fighting the Islamic State speaking at the American Institute of the Middle East, three years ago, said: “Idlib province is the largest Al Qaeda safe haven. It borders with Turkey and it is Ankara whom we should talk to about it.”

McGurk was as much right as he cut corners: he is perfectly aware how the Islamists found themselves in Idlib. It all began in 2011 with the attacks of Al Qaeda terrorists on Syrian government forces which held the line in the northern part of the province next to Jisr ash-Shugur. The Syrian-Turkish border existed then only on paper. In fact, it was utterly permeable resembling a block of Swiss cheese. Uncontrolled crossing points were a common occurrence. The most important of which was located near the Turkish border town of Reyhanli. Over time, this porous border turned into a real transit camp, through which Islamic militants from all over the world penetrated into Syria. Weapons were supplied via the ports of the Hatay province, also on Turkish soil.

A year later, the US entered the frame under the CIA operation codenamed Timber Sycamore. The Americans, supported by the special services of Saudi Arabia, the UAE, Qatar and Jordan, illegally sent military advisers, equipment and funds to Syria – with the consent of neither the Syrian government nor the international community. By 2013, Washington satisfying the wishes of Tel Aviv gave the go-ahead for the supply of weapons to several thousand Islamic militants. The latter operated under the clear order of overthrowing the Syrian government.

Throughout this time we have been reading reports in Western media calling those Islamic militants ‘rebels’. It was clear, however, they were just abandoned villains planning to turn Syria into a theocratic state. They set up their training camp south of Idlib. From there, these atrocious jihadists penetrated into other parts of Syria.

In 2014 and 2015, the Islamists, who by now possessed state-of-the-art weapons including anti-tank missile systems, pursued a hard-fought offensive on the province’s capital, Idlib, which was then controlled by Syrian government forces. Alas Idlib fell. Damascus troops retreated far inland and Bashar Al Assad sought military aid from Russia.

After the fall of the province’s major city, thousands of militants of the Islamist Army of Conquest, aided by Turkey and the Gulf states advanced to Aleppo. They were stopped by the Syrian army at great sacrifice of life. The turning point of the war occurred in late 2016 with the complete liberation of Aleppo from the armed gangs.  All the survivors flocked to Idlib – groups of foreign mercenaries and a medley of local jihadists from the ranks of Al-Qaeda and Jabhat al-Nusra.

A new bloody drama unfolded in Idlib – a struggle for power between various gangs. The “moderate Syrian opposition”, closely connected with Turkey and the Gulf countries, started creating its own political structures – the “Salvation Government” – with its own security services and police. Those “moderates” decided to establish a new command system to dismember the country and cut off Idlib from Syria in the future.  In turn, Jabhat al-Nusra jihadists, renamed by that time Hayat Tahrir al-Sham (HTS), suggested that the new territory be under their patronage. Nobody wanted to share power. At stake was money, weapons, assistance from the allies, control over pivotal routes and border crossing points. By the beginning of 2019, HTS militants resolved the conflict to their own benefit.

The US, Great Britain and Germany took a wait-and-see approach. As for Syria itself, its government troops had planned a military operation to liberate Idlib in mid-2018, but calls coming from the West “to prevent a humanitarian catastrophe” forced Assad to postpone the offensive. French Foreign Minister Jean-Yves Le Drian made clear what Europe really feared. Many militants in Idlib have European citizenship. In case of a military operation, they would flee to Europe posing a threat to the entire continent. Le Drian confirmed McGurk’s words about Idlib becoming a haven for al-Qaeda’s international recruits.

At this point, we need to revisit Turkey’s role. A year ago, in September 2018, an agreement was reached on a ceasefire in Idlib coupled with the creation of a 20 kilometre de-escalation zone. The Russian military police prepared humanitarian corridors for all those civilians wishing to leave while under Turkish supervision all heavy weapons were to be taken away.

Ankara had six months to fulfill its part of the deal. Yet, before the Turkish military’s very eyes the HTS militants intruded into the buffer zone with weapons consolidating their position. They increased the number of attacks across the dividing line. The Russian Khmeimim military base in Latakia suffered drone attacks. But condoning the new militants’ intrusion boomeranged on the Turkish army: the jihadists attacked the army’s stronghold, forcing the latter to ask for Russian air power assistance. Like the sorcerer’s apprentice from Goethe’s ballad, the perfidious Turks had to admit their blunder: “Wrong I was in calling spirits, I avow, for I find them galling, cannot rule them now.”

Obviously, the problem of Idlib requires an urgent solution. The situation is rapidly deteriorating. Both sides are already preparing for an offensive. The Syrian army against the militants who took refuge in Idlib and the militants against the government troops’ positions. A compromise can be found only by means of joint action guaranteed under the Astana process with the involvement of those Western countries whose citizens are fighting in Syria on the side of jihadists. But does such a big number of players have enough political will to reach an understanding?

Sadly, as long as this issue remains unresolved, Idlib will maintain its status as the new-found haven for terrorists and Syria will continue in a state of endless war.

Remand after man found with 10g cocaine on him (updated)