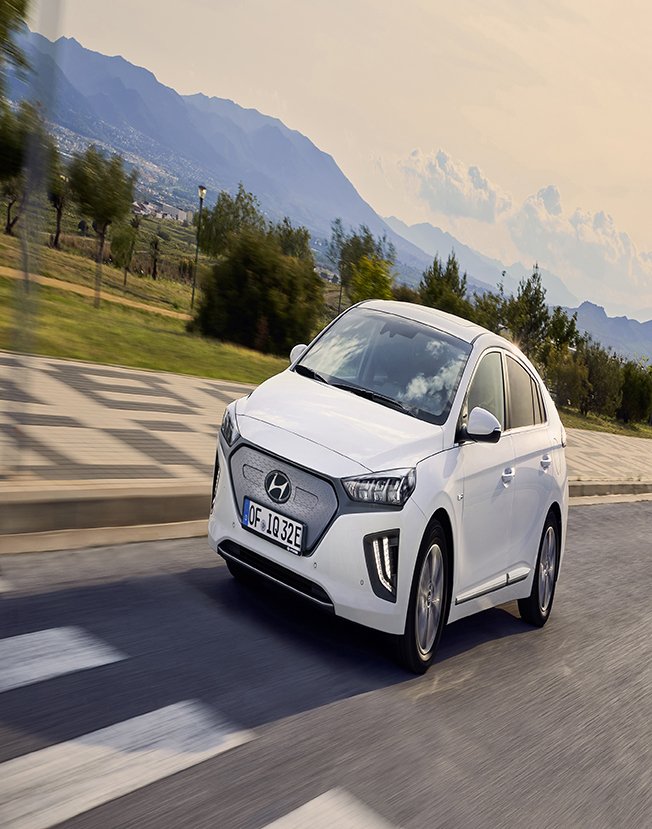 The survey was carried out by Hyundai, and revealed that - when it comes to car buying - the vehicle’s green credentials are four times as important as its acceleration and top speed

Eco-conscious Brits are now ‘keeping up with the greens’ by trying to outdo their friends and neighbours in the environmental stakes.

Research has revealed more than two-thirds (70 per cent) of UK adults view man-made climate change and ocean pollution as the biggest threat to humanity.

And while one-upmanship was traditionally confined to competitions over who has the flashiest gadgets or the tidiest front garden, things are taking a shift towards being green.

A survey found that 22 per cent admitted they try to outdo their peers when it comes to recycling and reducing their carbon footprint.
One-in-five said they had fallen out with a friend or neighbour because they thought they were harming the environment, and 15 per cent judge their neighbours for their lack of recycling.

The survey showed that four-in-ten adults actively inform friends and family if they have bought an eco-friendly product.
More than half (58 per cent) admitted they get annoyed at neighbours who put recyclable items in with general waste.

To make a point, one in 13 made a habit of ensuring their neighbours could see how much recycling they put out on collection day.
The research also revealed that 80 per cent of UK adults take pleasure in recycling while 70 per cent have tried to be more energy efficient over the past two years.

A third of adults said they have or are considering cutting back on consumption of beef and dairy products.
What, you might ask, has all this to do with motoring? The survey was carried out by Hyundai, and revealed that – when it comes to car buying – the vehicle’s green credentials are four times as important as its acceleration and top speed.

Nearly 60 per cent would consider owning an electric or hybrid vehicle instead of a petrol or diesel to cut down on their carbon emissions.

However, cost was the biggest concern for those considering an eco-friendly car (58 per cent), followed by a worry that there aren’t enough charging points (54 per cent).

The time it takes to charge a car and range anxiety (both 46 per cent) were other concerns.
Hyundai commissioned OnePoll to carry out the research to highlight its range of eco-friendly vehicles.
It is the only car company in the UK that sells battery electric models, hybrids, plug-in hybrids and hydrogen fuel cell cars.

The firm has just added the new zero-emission IONIQ Electric family saloon to the range: it has a range of up to 194 miles, and is also available with hybrid and plugin hybrid powertrains.

The new Kona Hybrid crossover joins the zero-emission Kona Electric offering a range of up to 279 miles.
A spokesperson from Hyundai said: “The findings show how important the environment is to people living in the United Kingdom, with 70 per cent of respondents regarding man-made climate change and pollution as the biggest issue facing humanity.

“Hyundai is committed to accelerating the transition to clean mobility and is investing heavily into alternative-fuel vehicles.
“We already have zero emission models like the Kona Electric and the NEXO fuel cell which actually cleans the air as it’s driven, and by the middle of next year nearly 80% of our line-up will be available as an electrified version. This will give motorists a wide range of choice and allow them to make the switch to a more environmentally-friendly car that will still suit their needs.”

The most popular things Britons are considering doing or have done to be green include walking more, cutting back on beef and dairy consumption, switching to a renewable energy supplier, buying second-hand clothes and furniture, reducing air travel, recycling, reducing plastic usage, growing their own fruit and vegetables – and buying a hybrid or electric car.

President’s plane forced to turn back for New York (updated)