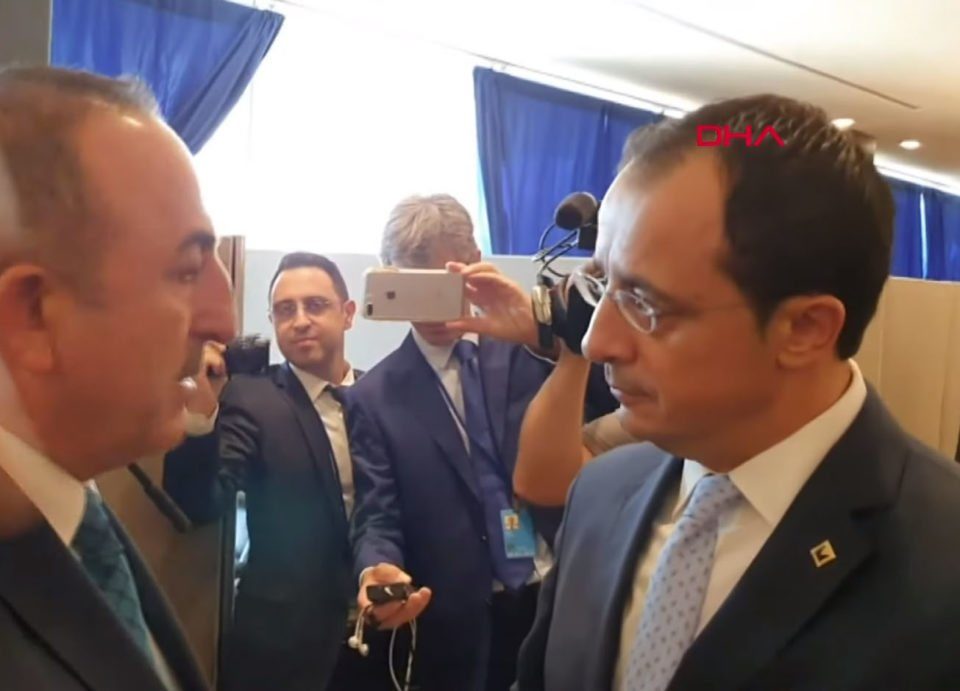 Nicos Christodoulides and Mevlut Cavusoglu during their encounter in the corridors of the UN HQ in New York.

THE GOLDEN boy of the government Nicos Christodoulides launched another form of diplomacy at the UN last week as part of his much-trumpeted multi-dimensional foreign policy that will make Kyproulla a dominant force on the world stage.

After economic diplomacy, accounting diplomacy, cultural diplomacy and feminist diplomacy, last Monday he pioneered ‘corridor diplomacy for television audiences’, a crude stunt that could still earn him a place in the history books as the first foreign minister that tried to conclude an agreement at an impromptu meeting in a corridor, and seal it with a handshake in front of dozens of journalists.

It all started when Christodoulides spotted his Turkish counterpart Mevlut Cavusoglu in a corridor of the UN building in New York talking to journalists, while waiting for his meeting to arrive. Christodoulides, who is a master at identifying an opportunity for self-promotion and publicity, seized his chance immediately, butting in and starting a conversation with Cavusoglu.

He wanted to know why Turkey insisted on a five-party, informal conference before the terms of reference were agreed, to which Cavusoglu replied that Turkey wanted to know what type of settlement the Greek Cypriots wanted, which was not unreasonable given Prez Nik’s ever-changing positions, ranging from two states to parliamentary democracy.

When, to prove his point, Cavusoglu tried to mention what was said at his last meeting with Nik, at which he reminded the golden boy that he was also present, Christodoulides stopped him with a “no, no, no, no, no…” This way he did not have to lie and deny Nik had proposed two-states to Cavusoglu.

THIS was just the intro of the corridor diplomacy. Our multi-dimensional foreign minister then tried to secure Cavusoglu’s agreement on a bizonal bicommunal federation (BBF), right there in the corridor, demanding the Turk shook hands on it.

“Forget two states and confederation,” Christoudides told him. “There is BBF. Let’s shake hands and agree to work for this. Do you agree? Are you ready?” Cavusoglu showed he was the grown-up, declining to offer his hand and participate in golden boy’s publicity stunt.

As if any Cyprob agreement could be concluded on a handshake. The two sides have been known to quarrel for weeks over the position of a comma on an official document and were now going to agree things on a handshake? Whenever Prez Nik again decided he did not want BBF, he could simply argue that the handshake did not last long enough to ratify to agreement.

In the end, Christodoulides’ showmanship backfired. His counterpart came across as the serious, measured diplomat while our golden boy looked like a novice diplomat whose sole concern was to show off to the folk back home. Many simpletons here in Kyproulla would have admired his corridor diplomacy performance even if it was in support of BBF that, according to his boss, would lead to a dysfunctional state.

ALL NIK’S reservations about BBF and political equality vanished in his speech to the UN General Assembly, which was masterfully designed to satisfy two very separate audiences.

In one part, after declaring he would not embark on a blame game, he accused Turkey of gunboat diplomacy, blackmail tactics, threats to and interference in our energy programme, violations to our EEZ and plans to settle the fenced area of Varosha. There was also an increasingly aggressive positioning of the Turkish military and an escalation of violations in the buffer zone. He also accused President Erdogan of misleading allegations.

This was the part of the speech geared for his audience back in Kyproulla – the political parties, media, patriotic voters – which expected him to use the General Assembly forum to report Turkey’s unlawful actions to the world that could not care less.

In the other part, the hawk turned dove. He was desperately keen for a resumption of the process where it left off in Crans-Montana, stressed his support for BBF with political equality (both of which he had been campaigning against for the last year) as set out in the relevant Security Council resolutions. He had swept his strong opposition to political equality, that he has demonised for the last 12 months, under the carpet.

The PeaceNik persona was for the benefit of the UNSG, who must have made it clear that there would be no resumption of talks without a commitment to BBF and political equality. Now, why the prez is so keen on a resumption of the talks is another question.

SO KEEN was he to promote his new PeaceNik persona, he even declared that the terms of reference should, among other things, be based on the six-point framework of the UNSG, Antonio Guterres, as presented on June 30, 2017 at Crans-Montana.

This is the same guy who had been telling us for the last two years that the Guterres framework he had agreed to was the version amended on July 4 of that year. He accused Akinci of misleading everyone by claiming there was only one framework – that of June 30 – and that the valid one was that of July 4.

A few months ago, the Prez made a huge fuss that the minutes for the July 4 meeting, at which the framework was allegedly amended, had gone missing. He demanded the UN found the minutes and implied there had been some conspiracy by the UN. After all this theatre, he came clean on Thursday, abandoning the July 4 fantasy and stressing his commitment to the June 30 framework.

We suspect Nik has been warned that if he does not play ball this time, the UN will finally draw the curtain on the Cyprob peace process and withdraw Unficyp. Incredible how a little fear focuses the mind.

THE QUESTION is had our Prez stepped into the trap that several newspapers were warning about last Sunday? While Politis forecasted that the “next few days hide opportunities and traps for whoever goes (to New York) unprepared,” Phil’s Washington-based correspondent, reported Prez Nik “must know the trap is set up.”

We were given no details about what form the trap would take, who had set it up and who it would benefit, which was a bit disappointing. But we had no choice than to take seriously the Phil correspondent’s warning as he has unearthed dozens of Cyprob traps in the US over the years. In fact, he has discovered so many he could open an exhibition and put them all on display.

The Prez must have fallen into the trap to have forgotten the July 4 framework and come out so openly in support of BBF and political equality.

I THANK my friend Alecos Constantinides for highlighting the trap scenario in his Alithia column, as it shed some light on the Prez’s Cyprob volte face. He also mentioned how Phil previewed the Prez’s trip to the Big Apple. It headlined its report, “New Golgotha for Kyrpiako (Cyprob).”

Everyone knows what Golgotha was and its metaphorical use, but it is invariably linked to the troubles and ordeals suffered by people. Has the Cyprob become a person that is subject to human suffering? How could the Cyprob climb Golgotha, when it is not a man but an issue of invasion and occupation, as Edek would say.

The real Golgotha for the Cyprob is in Kyproulla, where it has been tortured, abused and exploited for decades, with no end in sight.

The naive politics of the judiciary