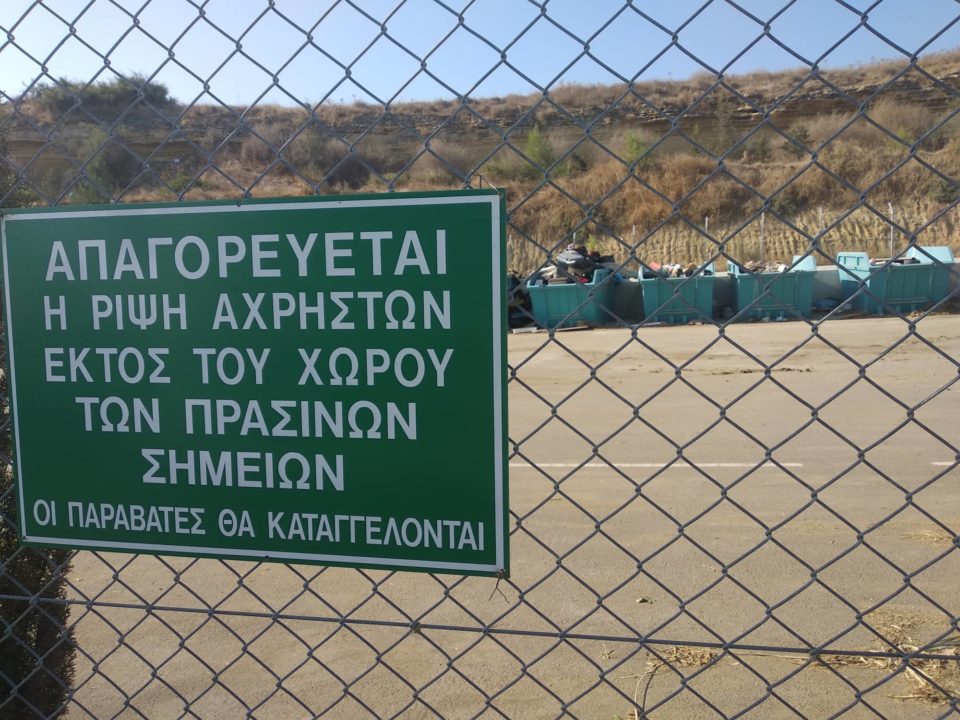 The green point in Strovolos, one of eight in the Nicosia area

Green points were launched in Cyprus more than a year ago and are proving to be a huge success for the disposal of household waste.

The green points (GPs) are established spaces where the public can dispose – free of charge – any household waste such as furniture, electronic equipment, metal or glass objects as well as plastic, paper, or fabrics. The items are then separated and taken to licensed units to be reused or recycled.

There are 23 green points in Cyprus. Nicosia has the lead with eight, Larnaca and Famagusta have six, and Limassol and Paphos have four GPs each.

“Strovolos is the busiest green point in Nicosia. About 60 per cent of the household waste we gather comes from here. We accept 150 cars daily on average, while on our busiest day we saw 200 cars,” Lambros Papalambrianou, responsible for all the Nicosia green point, told the Sunday Mail.

“We do not support businesses, only households due to the lack of space.”

Acceptable waste from households includes also X-rays, toxic waste such as batteries, paint and cleaning equipment, any machine or edible oils as well as thermometers.

“Many of the items such as chairs and old furniture are taken to Vasiliko Cement Works and are burned to produce energy. Any glass materials are taken for recycling for producing cement as well. Anything that is recyclable is sent abroad,” Papalambrianou explained.

With the dumping of unwanted items in the countryside and empty plots of land in the towns still an issue, the company and local authorities are constantly reminding the public of the availability of green points. There is usually at least one advertisement a month about the green points in the local papers and municipalities also send out flyers in Greek explaining their work. However, the information available in English is sketchy at best.

“Many people mentioned to us that there is not enough informative material in English, and we referred it to the authorities. From our part, we try to help everybody who comes here,” said Papalambrianou.

“People always come with their vehicle since they need to bring the items themselves. When a vehicle comes for the first time, we register the licence plates by taking a picture and writing down their personal information, specifically their name and the municipality where they live,” explains Papalambrianou

The green points are run by Citipost, a Greek company founded in 2014, at the peak of the Greek financial crisis, aiming to minimise the volume of solid waste through controlled and environmentally friendly disposal.

The establishment of a green point network in Cyprus is part of the government’s broader strategy for waste management.

But as always in Cyprus, this laudable waste management system comes with a slight hitch in Nicosia at least.

Outside the Strovolos green point are PMD recycling bins owned by Green Dot, the recycling collection company which is totally separate from the green points.

“There is a Green Dot trash can outside of green point for PMD recycling. Unfortunately, many people who come and find the point closed, they dump their items outside of that bin,” said Elias Kipouros, the person in charge for the Strovolos green point.

People have clearly decided they have got their unwanted items close enough to the green point facility for it not to count as littering, but technically it is.

“It is against the law to pollute the environment by littering. However, it is difficult to track and punish the offenders because they need to be caught red-handed,” said Kipouros.

After deadly fire, Greece plans to step up migrant deportation