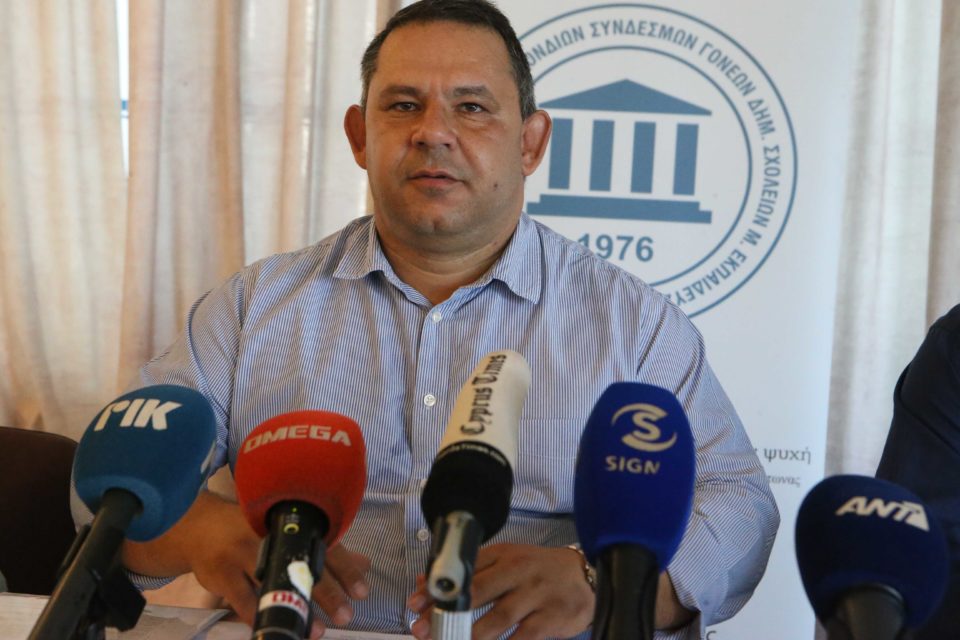 Head of the confederation of secondary school parents Kyriacos Nikiforou

The spat in the education sector over the government’s efforts to implement student assessment reform continued on Monday, when the confederation of secondary school parents warded off allegations directed against it by the secondary teachers’ union Oelmek.

On Sunday, Oelmek president Kyriakos Hadjisavva accused the head of the confederation, Kyriacos Nikiforou, of interfering in educational matters by sending letters to the education ministry pushing for the transfer of teachers to other schools.

Firing back on Monday by publishing several of the letters in question, Nikiforou said that they were sent to the relevant officials as required by protocol following complaints by parents and could not be considered interference.

Responding to Oelmek’s charges, Nikoforou said that “all they are doing is throwing mud on others”.

“What we will be experiencing in the coming period appears to be a dictatorship, where no one but the Oelmek unionists will be allowed to speak.”

He was speaking at a press conference on Monday called to clear the air after the squabble between Oelmek and the confederation reached its peak a few weeks ago when Hadjisavva walked out of a meeting with the education minister in protest at the presence of Nikiforou, citing “his ongoing nihilistic stance on various educational issues”.

Nikiforou had been increasingly vocal in his criticism of the reasons behind a work stoppage by teachers on Wednesday, September 25. The teachers’ main objection is to the introduction of four-monthly exams in high schools.

“In recent weeks, particularly after the passing of the law regulating student four-monthly assessments, black clouds have gathered over the island’s education,” Nikoforou said.

Nikoforou said that the parents’ confederation had asked for the assessments to be postponed for a year to provide time for further dialogue to ensure they are implemented successfully.

Nikiforou explained that an all-rounded proposal for student assessment was presented by the Education Minister Costas Hambiaouris in December 2018, and included alternative modes of assessment such as oral examinations, which were long-standing demands by parents.

This proposal, Nikoforou continued, was drawn up by a special committee composed of education organisations, parents, and students, and “was considered much better than the sterile proposal for four-monthly exams that was passed into law, and formed a serious basis for negotiating ways of improving [the law].”

Regarding the law as passed, Nikiforou acknowledged that problems are bound to arise, but the need to change the current structure of the educational system was urgent.

“We call on everybody – students, parents, and teachers – to let the law be implemented. Let’s try. And where problems arise, we’ll be the first to demand changes,” he said.

Speaking on CyBC on Monday, the president of the association of headmasters Giorgos Iosifides said that the association submitted written suggestions to the teachers’ unions in an attempt to curb teachers’ concerns over the new government regulations governing student assessment.

Meanwhile, Spyros Antonellos, head of the four-monthly examination service, said on Monday that “Oelmek cannot insist on discussing something that has been adopted into law.”

In an interview with Simerini weekly published on Sunday, Archbishop Makarios also criticised the teaching unions’ reluctance to accept the new assessment structure.

“Children learn with repetition. When I heard recently that they [the teachers] are planning on staging a strike, I wondered. In our time we only staged strikes for national reasons, not because we disagreed with some classes. In my opinion, they should be given the cane. It is a disgrace. What have we come to? Should we stay illiterate? Is this what we want?” he said.