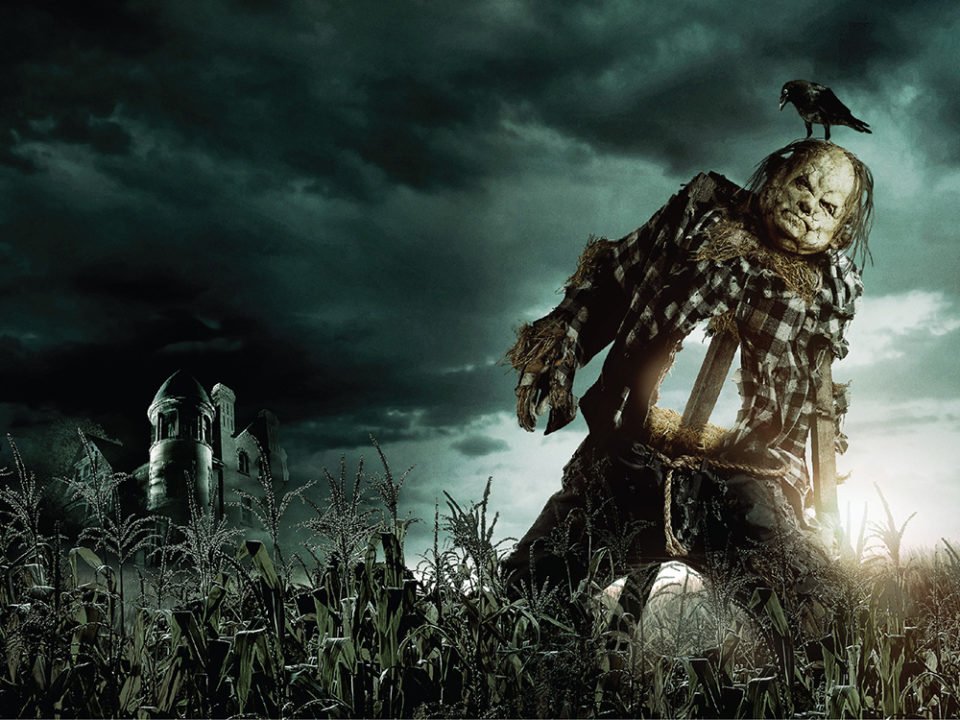 I’ll start, shall I? Once there was a juvenile horror with a Scooby-Doo plot that ended up being surprisingly enjoyable – and not just for juveniles! Wait, that’s not scary at all; let’s try another one. Once there was a film (loosely based on an 80s series of children’s books) that offered not just thrills for teens, but even a kind-of political message – more like vague political relevance – for adults who care about such things. Sorry, I’ll try and think of a scarier one…

This is a film about a murderous book – or, as Stella (Zoe Colletti) puts it: “You don’t read the book. The book reads you”. The recent Goosebumps, another movie version of an 80s series, also featured homicidal literature (books as villains? is this really a message we want to be sending our children?) – and Scary Stories to Tell in the Dark is very similar, slightly scarier in its particulars, lacking Jack Black’s ebullient presence, but knottier and more intriguingly plotted. It also follows Polaroid from a couple of months ago in having kids root through newspaper archives (not online, but an actual print archive) in search of clues to a long-ago crime. All a bit quaint – they’ll be listening to vinyl next! – but still; anything that reminds brainwashed yoof of life beyond Google is okay by me.

The big weakness here are the actual stories (with one exception, an effectively nightmarish sequence where a grinning snowman-like figure – actually a “pale fat lady” – approaches an increasingly panicky kid from every direction), taken from the books by Alvin Schwartz but rather half-heartedly filmed, with tired jump-scares and an air of contractual obligation. Fortunately they only add up to about 15 minutes total, the rest being an enjoyable wraparound plot where Stella and her chums go into the basement of a haunted house on Halloween and discover the digs of one Sarah Bellows, a.k.a. ‘Strange Sarah’, locked away by her evil family back in the day. Sarah, or her ghost, is the one writing the stories – in blood, no less – each story being essentially a death sentence for whoever’s in it. “There is no magic there,” notes the inevitable Creepy Old Lady. “There is only rage.”

Actually, there’s a bit of magic too – but you see her point, which is also where the vague political relevance comes in. Rage is a big part of the culture right now – and Sarah, it turns out, was a victim of the capitalist patriarchy (her father and brothers) plus her own minority status, locked away “because she was different”. Significantly, the film’s retro setting isn’t in the 80s but 1968, the time of ‘Tricky Dicky’ Nixon (often spoken of in the same breath as Trump, especially by those talking impeachment) and the time of the Vietnam war, mentioned more than once in the movie. Vietnam is where “we’re sending our children to die”, just as Sarah was (falsely) accused of killing children; her rage is implicitly political – which is why the climax, Stella pleading with the ghost that “the rage has to stop”, operates as a slightly conservative Author’s Message.

Anyway, it’s there if you want it – but the real secret weapon of Scary Stories to Tell in the Dark is Colletti, a freckled 17-year-old who gives the film a likeably geeky core, plus its straightforward appeal to the junior-high demographic. The horror is largely bloodless, more attuned to the kind of gross stuff kids tend to like: a girl trying to pop a pus-filled zit, or a boy discovering a human toe in the stew he’s eating. “I don’t want to die, I haven’t even had sex yet!” yelps one of the gang, which is pretty much the film in a nutshell – but it’s also true that another boy is Hispanic, abused as a “wetback” by local bullies, and he bonds with Stella over Night of the Living Dead (which of course has an ethnic-minority hero). More politics, not to mention the kind of secret cinephilia you’d expect from co-producer Guillermo del Toro.

This is quite a cinephile movie (Stella has posters of Universal horror classics on her bedroom wall), making sly use of well-worn clichés like music boxes and (yes) creepy old ladies. It’s also quite a juvenile movie, not exactly a must-see beyond its target audience – and admittedly it could’ve been scarier, then again that would also have cut into the charm, the whole Scooby-Doo vibe and such (presumably) retro details as an angry sister calling her annoying younger brother a “butt pimple”. Scary Stories to Tell in the Dark isn’t great, but it’s more-than-adequate fun as we wait to do battle with Joker next week. Now that’s scary.

Turkey’s threats force us to protect the Republic of Cyprus with defensive means, says President