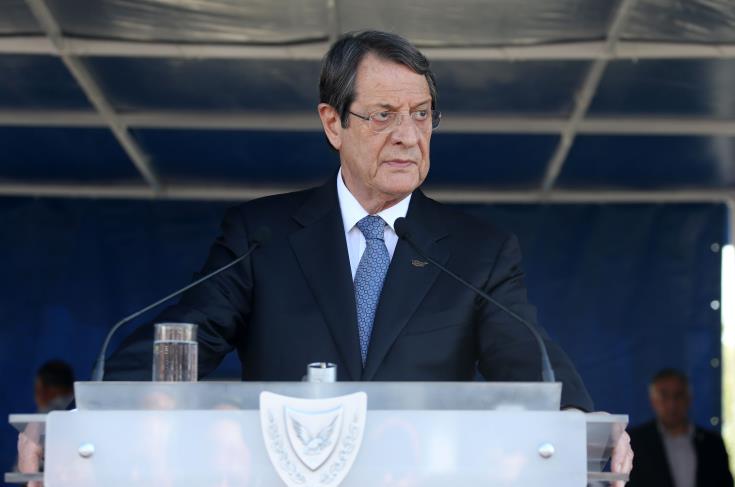 Cyprus President Nicos Anastasiades has once again pledged support to efforts made by UN Secretary General Antonio Guterres to secure the terms of reference that would lead to the resumption of the talks under the UN.

The SG has already met separately with President Anastasiades and Turkish Cypriot leader Mustafa Akinci in New York and he will most probably call a tripartite meeting and a Conference on Cyprus in October-November, according to sources and also public statements made by all parties involved.

In a televised message on the occasion of the Cyprus Independence Day, the President said that he has
conveyed the political will and determination of the Greek Cypriot side to the Secretary General during the meeting they had last Friday on the sidelines of the UN General Assembly in NYC.

Addressing the people of Cyprus, the President paid tribute to all those who fought and sacrificed their lives to free their homeland from the British colonial rule. He also sent a message to the relatives of the missing persons, pointing out that we will carry on our efforts to determine the fate of each missing person.

President Anastasiades stressed that because of the sacrifices, hard work and creative qualities of our people, and because of the contribution of all the presidents and governments of the Cyprus Republic and in spite of what the country has experienced over time, we managed to achieve high levels of development and progress and to overcome the recent financial crisis.
The President referred to the accession of Cyprus to the EU saying that we have become a constructive and reliable partner. In his address he also said that we need to demonstrate unity and consensus in order to face all the threats and challenges.

President Anastasiades pointed out that the Greek Cypriot side has , many times in the past, demonstrated its will and readiness to engage in a dialogue for the settlement of the Cyprus problem and to achieve lasting peace and stability through a just, viable and functional solution. He said that this solution must be based on the UN resolutions, the principles of international law, the European acquis and the achieved convergences between the two sides, which will lead to the formation of a truly independent and a sovereign state.

He said that the solution must end the Turkish occupation and free our country from occupying troops, invasive rights and dependencies from third countries, a state that will allow all lawful residents, Greek Cypriots, Turkish Cypriots, Maronites, Armenians and Latins to live in conditions of peace, security, prosperity and progress.

President Anastasiades referred to the escalating Turkish provocations and actions towards Cyprus in the island’s exclusive economic zone and in the fenced off city of Varosha, in occupied Famagusta as well as the provocations in the buffer zone. He added that the continuation of the Turkish invasion and the passing of time, maintain the unacceptable status quo. The President expressed his confidence that a solution to the Cyprus problem is possible, if our Turkish Cypriot compatriots realize that we do not need guarantees or to depend on others.

He also said that we need to realize the prospects and possibilities of a reunited and independent country for its own residents and for the stability and peace in the region.

Cyprus has been divided since 1974, when Turkish troops invaded and occupied 37% of its territory. Turkey has ignored numerous UN resolutions calling for the withdrawal of the Turkish troops and respect of the integrity and sovereignty of the Republic of Cyprus. Repeated rounds of UN-led peace talks have so far failed to yield results. The last round of negotiations, in the summer of 2017, at the Swiss resort of Crans-Montana ended inconclusively.

Nicosia took recourse to the UN Security Council, in a bid to reaffirm resolutions 550 and 789 on Varosha, after Turkish actions and statements aiming to open the city for settlement, while questioning Greek Cypriot property ownership. Varosha is the fenced-off section of the Turkish occupied town of Famagusta, often described as ‘ghost town’. UN Security Council resolution 550 (1984) considers any attempts to settle any part of Varosha by people other than its inhabitants as inadmissible and calls for the transfer of this area to the administration of the UN.

Efforts over the years for the legitimate citizens of Famagusta to return to the city have met with the refusal of the Turkish side, despite numerous decisions and resolutions by the UN, EU and other international institutions.

Moreover, Turkey issued a navigational telex (navtex), announcing its intention to start drilling off Cyprus and since 4 May 2019, the Turkish drill ship “Fatih” is anchored 36 nautical miles west of Akamas peninsula. The area falls within the Exclusive Economic Zone (EEZ) and continental shelf of the Republic of Cyprus. Ankara extended the navtex until November 1, 2019. A second Turkish drill ship, “Yavuz”, was anchored off the island’s north-eastern coast on July 8 and operates within the territorial waters of the Republic of Cyprus.

In response, EU Foreign Ministers endorsed on 15 July 2019 measures concerning Turkey’s illegal drilling in the Exclusive Economic Zone (EEZ) of Cyprus. In accordance with the 20 June 2019 European Council conclusions, Foreign Ministers also invited the High Representative and the European Commission to continue working on options for targeted measures in light of Turkey’s continued drilling activities in the Eastern Mediterranean.

Eurostat: Inflation in Cyprus expected to turn negative for September

Red meat back on the menu?