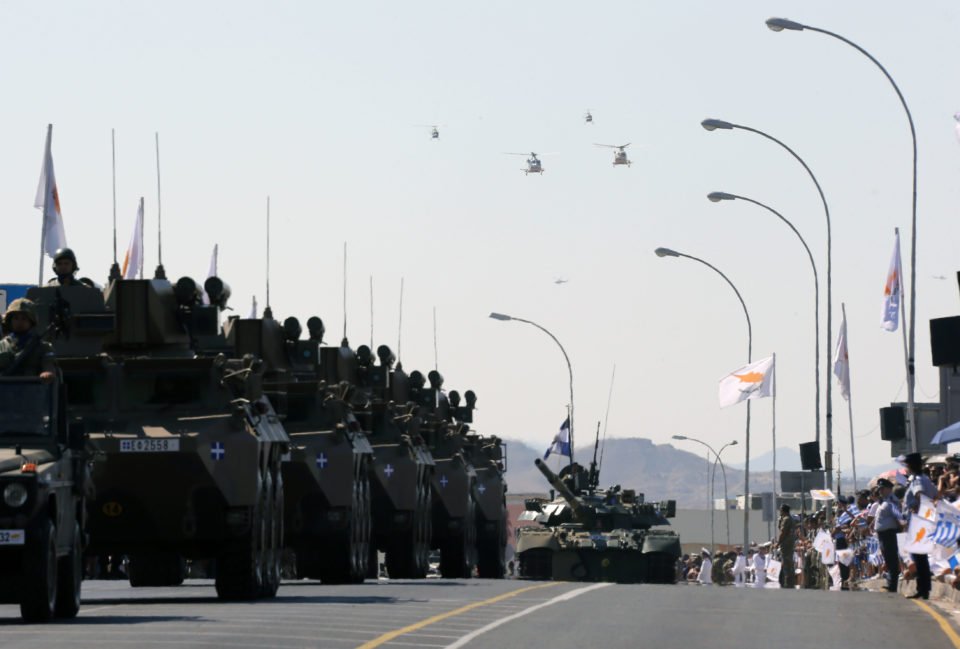 Turkey’s threats in Cyprus’ exclusive economic zone cannot but force us to take defensive measures to protect the Republic of Cyprus, President Nicos Anastasiades has said.

Speaking after a military parade in Nicosia, to commemorate the 59th anniversary of Cyprus Independence on Tuesday, the President pointed out that today’s anniversary is a day for concern and a day to communicate a message that we want peace and we seek for those conditions that will allow us to live in peace with our Turkish Cypriot compatriots. However, he underlined, the Turkish threats prompt us to take those defensive measures that will protect the Republic of Cyprus from those threats.

The President said that the latest developments demonstrate our determination to create those conditions that will lead to a constructive dialogue for a Cyprus solution that will allow for all lawful inhabitants of the Cyprus Republic to live in peace and enjoy human rights just like all other Europeans do, without guarantees, depending on others and privileged treatment.

The Cyprus President furthermore said that on this day we must pay tribute to all those who sacrificed their lives and fought for Cyprus to become independent and regardless of what happened with the Turkish invasion in 1974, is recognized as a legal entity. However, he said, Cyprus’ territorial integrity has suffered a barbaric possession and deprivation of human rights.

Cyprus has been divided since 1974, when Turkish troops invaded and occupied 37% of its territory. Turkey has ignored numerous UN resolutions calling for the withdrawal of the Turkish troops and respect of the integrity and sovereignty of the Republic of Cyprus. Repeated rounds of UN-led peace talks have so far failed to yield results. The last round of negotiations, in the summer of 2017, at the Swiss resort of Crans-Montana ended inconclusively.

Nicosia took recourse to the UN Security Council, in a bid to reaffirm resolutions 550 and 789 on Varosha, after Turkish actions and statements aiming to open the city for settlement, while questioning Greek Cypriot property ownership. Varosha is the fenced-off section of the Turkish occupied town of Famagusta, often described as ‘ghost town’. UN Security Council resolution 550 (1984) considers any attempts to settle any part of Varosha by people other than its inhabitants as inadmissible and calls for the transfer of this area to the administration of the UN.

Efforts over the years for the legitimate citizens of Famagusta to return to the city have met with the refusal of the Turkish side, despite numerous decisions and resolutions by the UN, EU and other international institutions.

Moreover, Turkey issued a navigational telex (navtex), announcing its intention to start drilling off Cyprus and since 4 May 2019, the Turkish drill ship “Fatih” is anchored 36 nautical miles west of Akamas peninsula. The area falls within the Exclusive Economic Zone (EEZ) and continental shelf of the Republic of Cyprus. Ankara extended the navtex until November 1, 2019. A second Turkish drill ship, “Yavuz”, was anchored off the island’s north-eastern coast on July 8 and operates within the territorial waters of the Republic of Cyprus.

In response, EU Foreign Ministers endorsed on 15 July 2019 measures concerning Turkey’s illegal drilling in the Exclusive Economic Zone (EEZ) of Cyprus. In accordance with the 20 June 2019 European Council conclusions, Foreign Ministers also invited the High Representative and the European Commission to continue working on options for targeted measures in light of Turkey’s continued drilling activities in the Eastern Mediterranean.

Film review: Scary Stories to Tell in the Dark **

Voice and piano in old Nicosia