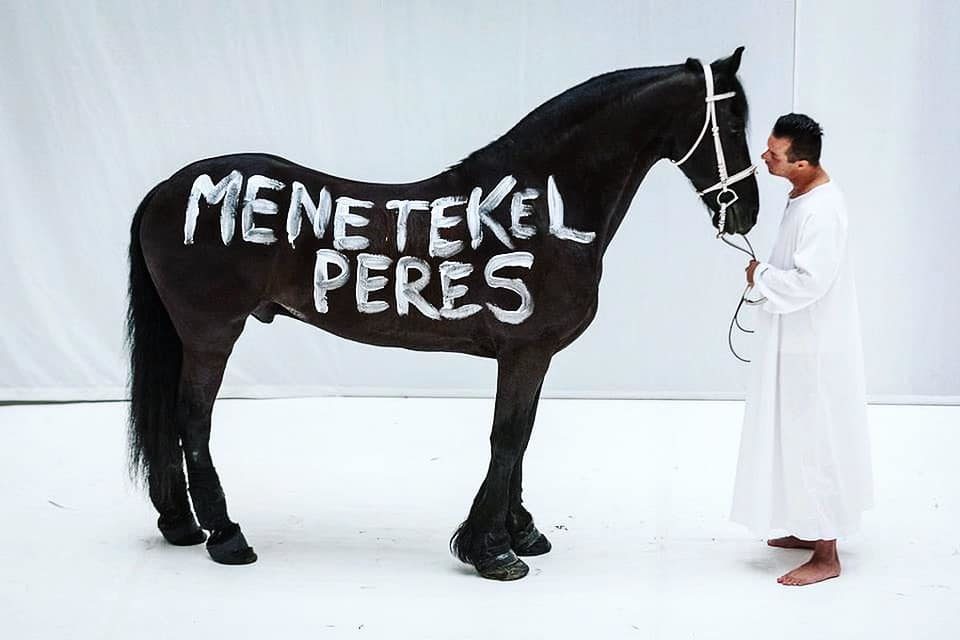 A scene from the play

The Animal Party said on Wednesday night it welcomed the decision to cancel a play in which a horse appeared as a prop and which the party said had shown signs of distress.

“We welcome this cancellation, which comes to confirm the words of Mahatma Gandhi’s that the greatness of a nation and its moral progress can be judged by the way in which its animals are treated,” the party said in an announcement.

Earlier in the day, the party had called on the veterinary services and the minister of agriculture on Wednesday to investigate the circumstances surrounding the appearance of the horse.

According to the party announcement, the horse had appeared on stage for around 15 minutes, and “tried to escape from the hands of its tamer and from a second actor who was painting its body”.

The play, Julius Caesar: Spared Parts by the Italian director Romeo Castellucci, premiered in Nicosia on Tuesday in the framework of the Kypria International Festival. The play had been scheduled for four more performances, two on Wednesday and two on Thursday.

Party leader Kyriakos Kyriakou told the Cyprus Mail that in the play, actors paint over the horse, wash the paint off with water at the end, only to repeat painting over the horse during the next performance.

The party had called on the veterinary services to investigate the case, and to ensure the immediate removal of the horse from the play in question, if the act was indeed against the law.

The party announcement posed a series of questions, such as whether the horse was taken from the stall of the racing tracks, in which case it did not have the relevant training for such public appearances.

In statements to media, the festival’s artistic director Andy Bargilly said that the horse was specially trained and had appeared before an audience in the past, and participated in movies and television series. The horse’s trainer was also present during the performance, he said.

Regarding the issue of painting over the horse, Bargilly said that actors used a bio shaving cream which was easily removed. He also clarified that the horse was on stage for far less than 15 minutes.

‘I might go on until I’m 108,’ Anastasiades jokes on birthday