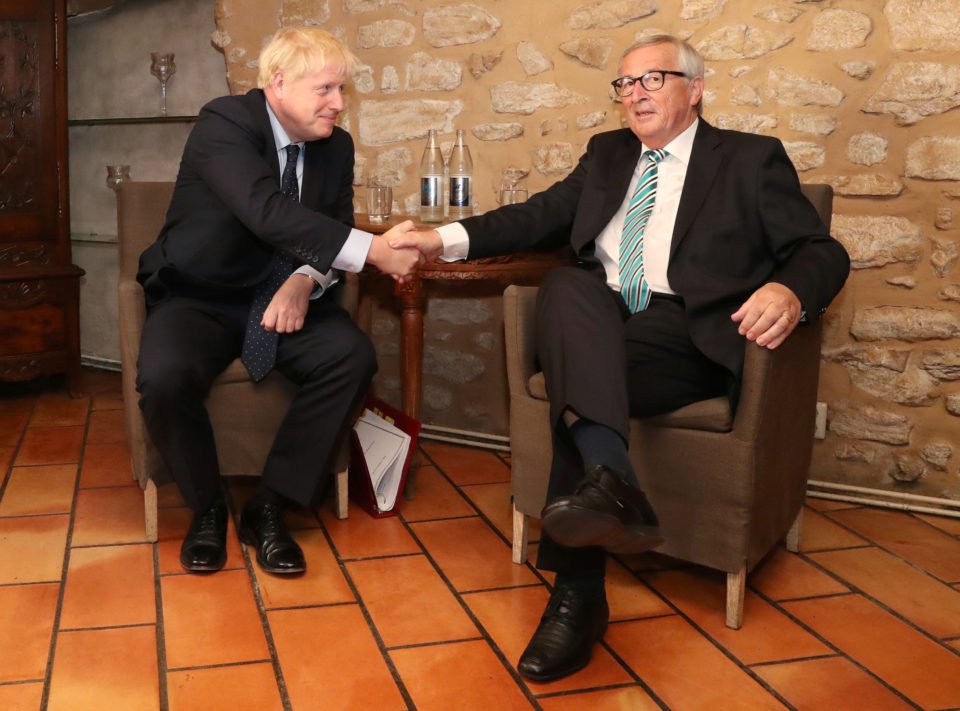 Boris Johnson, Jean-Claude Juncker said while there had been some "positive advances", there remained "problematic points" particularly over the "governance of the backstop" which needed to be resolved

Brussels has reacted coolly to Boris Johnson’s blueprint to break the Brexit deadlock with a plan that would see Northern Ireland effectively remain tied to EU single market rules for goods but leave the customs union.

Under his proposal, the arrangements would have to be approved by the currently suspended Northern Ireland Assembly, which would then vote every four years on whether to keep them.

In a letter to European Commission president Jean-Claude Juncker setting out his plan, Johnson said he believed it represented a “reasonable compromise” to the issue of the Northern Ireland border.

However, after speaking to the Prime Minister by telephone, Juncker said while there had been some “positive advances”, there remained “problematic points” particularly over the “governance of the backstop” which needed to be resolved.

In a statement, the commission said that Juncker welcomed the proposals for “full regulatory alignment” between Northern Ireland and the EU.

“However, the president also noted that there are still some problematic points that will need further work in the coming days, notably with regards to the governance of the backstop,” the statement said.

“The delicate balance struck by the Good Friday agreement must be preserved.”

The statement also expressed concern about the proposed customs rules, saying they still needed a “legally operational solution” to ensure there was no return of a hard border on the island of Ireland after Brexit.

In his letter, Johnson said failure to reach an agreement ahead of Britain’s scheduled withdrawal from the EU on October 31 would represent “a failure of statecraft for which we would all be responsible”.

“Both sides now need to consider whether there is sufficient willingness to compromise and move beyond existing positions to get us to an agreement in time,” he said.

“We are ready to do that, and this letter sets out what I regard as a reasonable compromise: the broad landing zone in which I believe a deal can begin to take shape.”

However, Labour leader Jeremy Corbyn was swift to condemn the plan, saying it was worse than the Withdrawal Agreement negotiated by Theresa May and would undermine the Good Friday Agreement.

He said the Prime Minister appeared to be intent on a no-deal break with the EU.

“Everything to do with his behaviour and his language over the past few weeks has been about getting a no-deal Brexit.

“I’m sure he knows full well that what he’s put forward is unlikely to be approved.”

Even before the document was published in full, Irish premier Leo Varadkar said the signs were “not promising” and that it did not appear to offer the basis of an agreement.

In contrast, Johnson’s allies at Westminster, the DUP, broadly welcomed the plan as the basis for “serious and sustained engagement” between the the UK and Brussels.

“These proposals would ensure that Northern Ireland would be out of the EU customs union and the single market as with the rest of the United Kingdom,” it said in a statement.

The plan would see the creation of a “zone of regulatory compliance” for manufactured goods as well as agri-food products covering the whole of the island of Ireland – which would see the North align with EU rules.

Goods entering Northern Ireland from the rest of the UK would be subject to identity and documentary checks at either a border inspection post or a designated point of entry.

Northern Ireland would leave the customs union with the rest of the UK, the plan insisted that that would not mean checks taking place “at, or even near” the border.

Instead, it proposed a system of declarations for goods moving between Northern Ireland and the Republic with only a “very small proportion” undergoing physical checks either at the traders’ premises or other designated locations anywhere on the island of Ireland.

The establishment of the zone of regulatory compliance would require the consent of the Stormont assembly, which would then have to be renewed every four years.