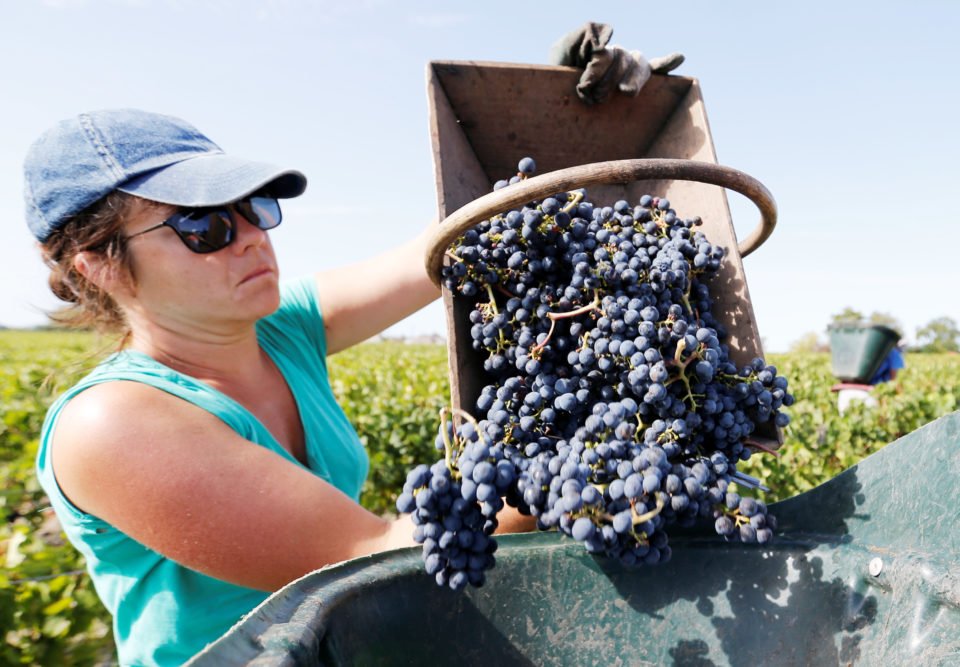 A picker empties her basket of black grapes

The European Commission will quickly start work on a tax on foreign polluting firms, the nominee for the EU’s economic and tax commissioner said on Thursday, a move that could hit U.S. companies and deepen a trade war with Washington.

In his confirmation hearing before EU lawmakers, Italy’s Paolo Gentiloni also pledged “adequate” fiscal efforts to counter an economic slowdown in the euro zone that he said could be longer than currently expected.

“We will try to be very quick and effective on a carbon border tax,” Gentiloni, who is due to take office in November, said.

He warned of legal and technical hurdles in devising the levy, but said work would start immediately to make sure the tax would be compatible with World Trade Organisation rules.

The tax is meant to shield European companies from competitors based in countries where climate protection schemes are not as strict.

President Donald Trump intends to pull the United States out of the international Paris climate protection deal that aims to reduce carbon emissions. Under the terms of the pact, that cannot happen before Nov. 4, 2020.

Gentiloni’s remarks come the day after the United States said it would slap 10% tariffs on European-made Airbus planes and 25% duties on French wine, Scotch and Irish whiskies, and cheese from across the continent as punishment for illegal EU aircraft subsidies..

In separate comments to lawmakers, Gentiloni, a socialist former Italian prime minister, also said minimum corporate tax rates were one of the possible solutions to counter what he said was an unacceptably excessive tax competition within EU states.

Currently, the 28 EU countries decide freely their national tax rates for firms, with the EU having limited powers only on minimum rates on sales taxes.

He reiterated the EU should move alone on an EU-wide tax on digital corporations if no deal on that was reached at global level in 2020. He said he was confident, although “not fully optimistic”, about an international agreement by the set deadline.

In the event of no consensus, he said the EU Commission would begin working on a proposal for an EU digital tax from next summer and would seek to take away from EU governments the veto power on tax matters that prevented the introduction of a digital levy in the bloc last year.

Gentiloni, who will also be in charge of the bloc’s economic policy, said the EU should consider measures to favour growth at a time when the bloc faces risks of a prolonged economic slowdown.

“In this situation our economic policies should be strongly oriented towards growth and investment,” he told lawmakers.

Gentiloni said the Commission’s annual recommendation on the euro zone’s fiscal stance would depend on the “seriousness and duration of the slowdown” as estimated in the next set of EU forecasts due on Nov. 7.

That could last longer than six months or a year, as currently expected, he cautioned.

In its latest economic forecasts released in July, the European Commission predicted euro zone growth would slow to 1.2% this year from 1.9% in 2018, but forecast growth rebounding to 1.4% in 2020.

The ECB loosened policy further last month to lift growth and inflation, cutting its key rate to minus 0.5%, inching closer to what is the effective bottom, a level beyond which it would be counterproductive to go.

Gentiloni reiterated that he would seek to use the leeway allowed by EU fiscal rules to permit governments to invest for growth and would also target a reduction of public debt.

He called for a review of EU fiscal rules that would make them simpler and urged an “ambitious” funding plan for an EU unemployment reinsurance scheme.

The bloc is currently debating whether to fund this scheme with loans or with more generous grants to states with high unemployment levels.

State moving to install CCTV in kindergartens and primary schools

Saudi Arabia opens to tourists from around the world