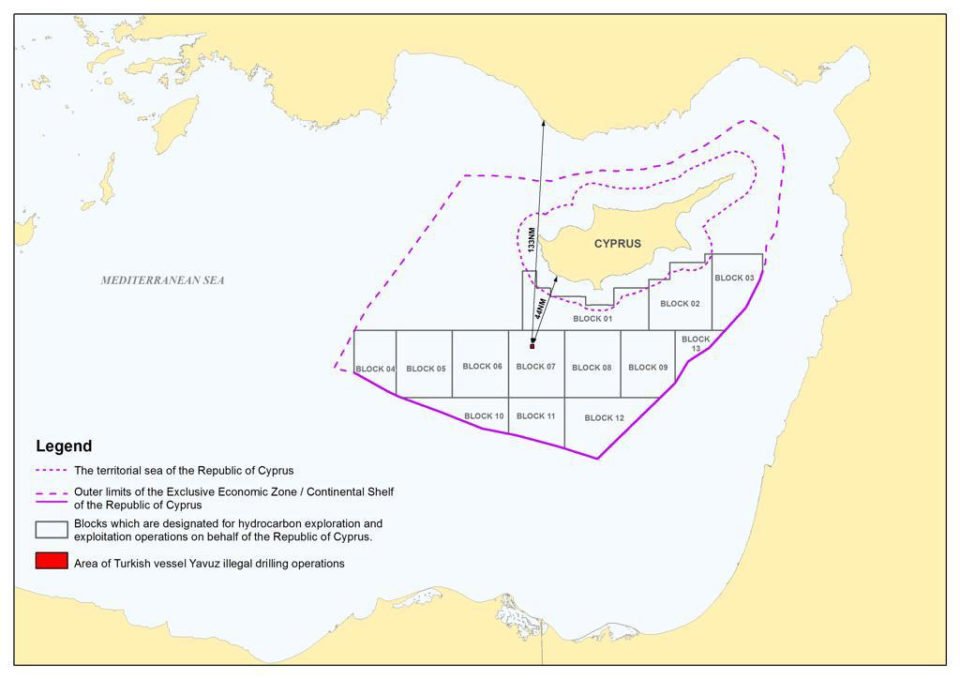 By George Psyllides and Lizzy Ioannidou

The EU urged Turkey on Friday to respect the sovereign rights of the Republic of Cyprus, as targeted measures were discussed in light of Ankara’s continued drilling activities inside the island’s exclusive economic zone.

According to a Commission statement, High Representative/Vice-President Federica Mogherini held a phone conversation on Friday with Foreign Minister Nicos Christodoulides.

In their discussion, they deplored Turkey’s further drilling activities 45 nautical miles off the southern coast of Cyprus.

“Turkey’s actions come at a moment when intensified efforts are ongoing for the resumption of Cyprus settlement talks under the auspices of the United Nations Secretary General. It remains crucial to ensure a conducive environment for these talks,” the statement said.

Mogherini and Christodoulides discussed the possibility of targeted measures in light of Turkey’s continued drilling activities and it was also decided that the issue will be on the agenda of the next Foreign Affairs Council on October 14 in Luxembourg.

President Nicos Anastasiades also informed the President of the European Council, Donald Tusk, of the developments.

Tusk told Anastasiades that the matter will be discussed in the next summit between October 17 and 19.

The EU called on Turkey to refrain from such actions and respect the sovereign rights of the Republic of Cyprus to explore and exploit its natural resources in accordance with international law within its Exclusive Economic Zone.

“Furthermore, Turkey should accept the invitation of the government of Cyprus and address the issue of delimitation of Exclusive Economic Zones and continental shelf through dialogue and negotiation in good faith and in full respect of international law and in accordance with the principle of good neighbourly relations,” the statement said.

Earlier, a British minister said Britain deplored any drilling in waters close to Cyprus, as Turkey prepared to start searching for oil and gas south of the island, in block 7.

“I made it very clear that Great Britain deplores any drilling in waters close to Cyprus but supports Cyprus‘ right to extract oils in its exclusive economic zone,” said British Minister of State for Europe, Christopher Pincher.

Any oil wealth, he said, should be extracted to the benefit of all Cypriots.

Pincher was speaking in Nicosia after a meeting President Nicos Anastasiades and after the government issued another strong condemnation of Turkey’s latest move.

In a statement it demanded Turkey immediately cease all its “illegal activities” and withdraw all its drilling and seismic vessels.

The announcement said the planned drilling, this time round in a licensed block, constitutes “further severe escalation of Turkey’s continued violations of the sovereign rights of the Republic of Cyprus under the UN Convention on the Law of the Sea as well as customary international law”.

On Friday morning the Turkish drillship, the Yavuz, had stopped about 51 nautical miles southwest of Cyprus, off the coast of Paphos in Cyprus exploration block 7.

Speaking to Turkish press on Friday, Turkish foreign minister Melvut Cavusoglu said that “they said that they [Turkey] would come, have a stroll, and leave. But when the drillships went [to the eastern Mediterranean], the balances tipped. And in the coming period, they will tip even more.”

Turkey insists the area is within its continental shelf.

“We do not negotiate issues which involve our national sovereignty,” Cavusoglu said.

The Cyprus government said that in flagrant violation of international law, Turkey has chosen to conduct a drilling operation within offshore exploration Block 7, which was licensed by the Republic to European companies, and lies within the EEZ/continental shelf of Cyprus.

It said this block had already been delineated in accordance with international law, between the relevant opposite coastal states, namely Cyprus and Egypt, by means of the 2003 EEZ Delimitation Agreement.

It is stressed that “the hydrocarbons exploration and/or exploitation of the exploration Block 7 is an exclusive sovereign right of Cyprus and does not affect the rights of any third state, including Turkey.”

“This new provocation is exemplary of Turkey’s defiance of the European Union’s and the international community’s repeated calls to cease its illegal activities and respect the sovereign rights of the Republic of Cyprus to explore and exploit its natural resources within its maritime zones. It is yet another proof of the utterly provocative and aggressive behaviour of Ankara, which has chosen to speedily and irreversibly depart from international legality, putting thus the security and stability in the Eastern Mediterranean at risk,” the announcement said.

The statement said that Cyprus was determined to continue defending its legal rights, intensifying its efforts at a legal, political and diplomatic level, using all available means, especially in the framework of the European Union.

“To this effect, we reiterate the decisions of the European Union, and in particular the Conclusions of the European Council of 20 June 2019, strongly condemning Turkey’s illegal actions in the Eastern Mediterranean, as well as the Conclusions of the Foreign Affairs Council of 15 July 2019 through which the High Representative and the Commission were invited to continue work on options for targeted measures in light of Turkey’s continued drilling activities in the Eastern Mediterranean,” the press release concluded.