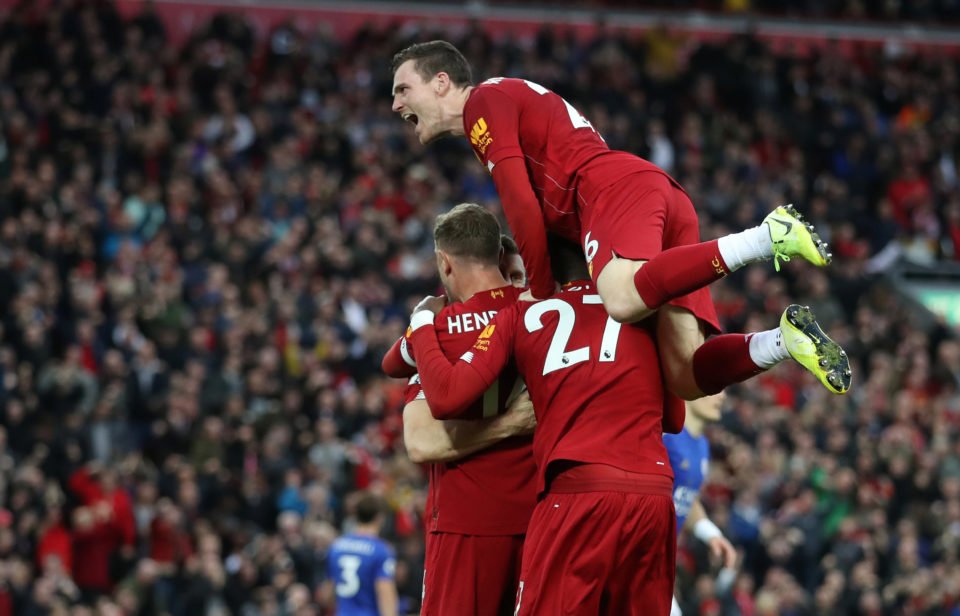 A stoppage-time penalty from James Milner earned Liverpool a dramatic 2-1 victory over Leicester City at Anfield on Saturday, maintaining the league leaders’ 100% start to the Premier League season.

On his return to the club he almost guided to the 2013-14 Premier League title, Leicester manager Brendan Rodgers set his current side up to frustrate a Liverpool team chasing a 17th consecutive league victory.

The hosts, who came into the clash unbeaten in their last 43 league games at Anfield, did initially struggle to break down Leicester as Rodgers seemed to have got his tactics spot on.

This relentless Liverpool team cannot be kept at bay for too long, however, as Sadio Mane brilliantly slotted home his 50th league goal for the club to break the deadlock in the 40th minute.

Chances for Liverpool to double their advantage came and went, with Mane and Mohamed Salah guilty of poor finishing, and their profligacy looked to have cost their side as James Maddison equalised with 10 minutes left.

However, the drama was not over, as Mane was brought down in the box to give Liverpool the chance to snatch all three points and Milner converted the penalty to send Liverpool, with Manchester City not in action until Sunday, eight points clear at the top of the standings.

Jack Grealish, Conor Hourihane and Douglas Luiz completed the rout, with Josip Drmic scoring a late consolation for Norwich who looked a shadow of the side who had beaten Manchester City in their previous home game.

Wesley, who has now doubled his Villa goal tally, was criticised for a slipshod performance against Burnley last weekend but justified manager Dean Smith’s faith with his first-half strikes.

On 14 minutes he brought down Anwar El Ghazi’s cross to rifle past Michael McGovern, Norwich’s third-choice keeper making his Premier League debut for the club at the age of 35.

Wesley took advantage of good work from Hourihane to double Villa’s lead on 30 minutes but then had a penalty well saved by McGovern, who also did enough to ensure Wesley’s follow-up shot ballooned over the bar.

Grealish side-footed home his first top-flight goal in four years for Villa’s third just after the break before more bad defending allowed Hourihane to hit their fourth. Luiz’s 83rd-minute thunderbolt delighted the noisy away support as Villa leapfrogged Norwich to move out of the relegation zone.

A 72nd-minute volley from Jeff Hendrick meanwhile gave Burnley a 1-0 win over Everton in the Premier League at Turf Moor on Saturday, condemning Marco Silva’s side to a fourth straight defeat.

The result leaves Everton languishing in 17th place, a point above the relegation zone, while Burnley extended their unbeaten run to four games and moved up to fourth place ahead of Sunday’s games.

Gylfi Sigurdsson tested Burnley keeper Nick Pope with a free kick and, at the other end, Hendrick went close with a back-post volley from a corner which was kept out by the legs of Everton keeper Jordan Pickford but openings were rare in the first half.

Everton were reduced to 10 men in the 56th minute when captain Seamus Coleman was given a second yellow card for a reckless aerial challenge on Dwight McNeil.

Ashley Barnes then found space in the Everton box but blasted high and wide as the pressure from Burnley increased against an Everton side looking well short of confidence.

The goal came via an Ashley Westwood corner which was met by a totally unmarked Hendrick at the back post, the Ireland international doing well to volley in from a tight angle. (

Kissonerga first for recycling in Paphos for third year