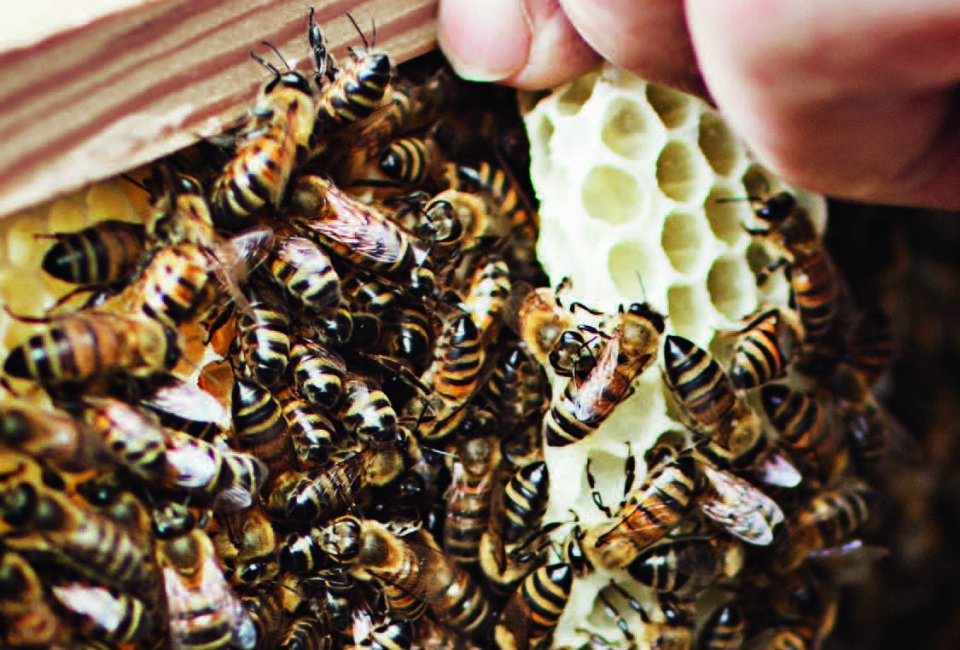 He loved bees even as a child. When he was young, Dominique Micheletto saw his queen on a photo and rode thousands of kilometres on his motorbike to join her on the island. A meeting of two passions

“Would you like to put this hat on?” Jauntily, Dominique picks up a typical beekeeping hat from the back of his pick-up truck. When we all say no, and the photographer asks him to pull on the net cap himself, Dominique laughs. “Oh no!” He never wears any protection. “My bees would be really offended!” As a beekeeper he would never put his own needs above those of his bees.

We are standing in a forest clearing on the outskirts of Engomi, an area of 18,000 inhabitants just outside Nicosia. It is home to some beautiful villas and a handful of embassy residencies, including the French embassy, the country that Dominique calls home. The son of Italian immigrants, he visited the island of Aphrodite for the first time when he was 20 – on his 1955-model BMW motorbike. Dominique desperately wanted to get to know his Cypriot penfriend, with whom he had madly fallen in love before he even left school – all because of a photo she had enclosed in one of her letters. When he finally came face to face with Erasmia, Dominique’s fate was sealed.

The Lorrainer remained at his Cypriot love’s side. He has now been living on the Mediterranean island for more than three decades, and after retiring from his job as director of the Cypriot office of Air France, he fulfilled at least part of his childhood dream. “I wanted to be a ranger; I spent a lot of time in the woods as a child. But I was also fascinated by bees. My mother told me that at the age of four I would run to our neighbour at the end of the street, a teacher, who had a few beehives in a kind of pavilion. Whenever she couldn’t find me, Maman told me, she knew she would find me at the neighbour’s watching the bees fly back to the hive.”

Dominique has thirty three of his own bee colonies, distributed among 170 hives in various locations around the island. “I haven’t checked my hive in Engomi for a long time,” he admits. Then he fearlessly and gently opens one hive after another and looks at the bees swarming around the honeycomb, as if he wanted to stroke each and every bee with his eyes, if nothing more. Here he gently scrapes off a bit of fresh honey with a spatula, shaking off some of the colony in the process. And before we know where we are, we are holding a piece of the wonderful beeswax in our hands, and sucking out the sweet meli. “Eat it with fresh, wild thyme …” the beekeeper tells us and points to the aromatic herb sprouting from the forest floor.

Dominique’s movements are calm and controlled; the bees seem to love him as he loves them: apart from his metal bee smoker, into which he occasionally stuffs new pine twigs, he doesn’t need any protection.

“Where is the old girl?” the tall man suddenly murmurs; he is looking for the queen. He quickly finds her. Because Dominique is more than an average beekeeper, he also breeds queen bees. He also organises honey tastings, and is writing a book about the delicious honey from the island of Aphrodite. 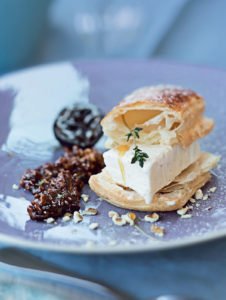 For the caramelised walnut flakes

Take the egg yolk, honey and scraped-out vanilla pod and combine well until you have a homogeneous mass. Now whip the cream until stiff and fold into the mixture with a rubber spatula (not with a whisk) until everything is perfectly combined. Brush a rectangular cake tin with water, cover the bottom and sides with cling film, and pour the mixture into the tin. Leave in the freezer for at least 12 hours.

Remove the parfait from the freezer and leave to defrost for 10 minutes. Using a hot knife, cut the half-frozen parfait into thick slices and leave to rest briefly. Place onto the filo pastry as it begins to melt, because it is only in this state that the aromas can fully unfold.

Cut the ready-made filo pastry into 12 x 5 cm pieces and let them rise for about ten minutes in a fan-assisted oven at 200C. Use one piece for the bottom and one for the top of the sandwich.

Lightly caramelise the walnut flakes with 2 tbsp of sugar in a saucepan and flavour with a few thyme leaves.

Buy pickled green walnuts from a delicatessen and cut in half.

Place the lukewarm filo pastry on the plate, spoon the melting honey parfait on top and cover with another piece of filo pastry. Place a sprig of thyme on top. Decorate with a tbsp of caramelised walnuts and half a pickled walnut. Drizzle honey over the sandwich and dust with icing sugar.

Actor-director is ‘the Pope’ of Cyprus theatre