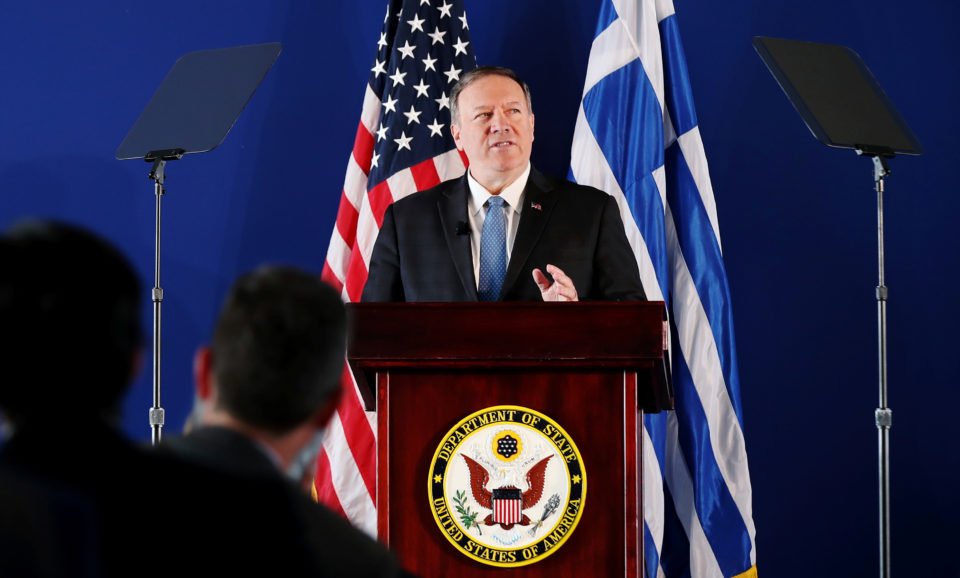 US Secretary of State Mike Pompeo speaking in Athens

Condemnations against Turkey’s actions in the Cyprus EEZ poured in from both sides of the Atlantic on Saturday after Turkish Energy Minister Fatih Donmez tweeted in the morning that the Yavuz drillship arrived in the area on Thursday night .

According to Donmez, the ship reached the Morphou-1 location. “Our ship will start drilling as soon as possible after completing all preparations,” he added.

Morphou-1 is within Cyprus’ offshore block 7. The Yavuz, is currently 50 nautical miles off the coast of Paphos in the block while drilling will reportedly start on Monday.

US Secretary of State Mike Pompeo said the move was “unacceptable” while France characterised it as “an unfriendly move”.

Turkish President Recep Tayyip Erdogan announced they were looking to buy a third drillship so that they wouldn’t have to rely on international companies.

On Saturday, Pompeo, who was in Athens as part of trip to southern Europe, said that Turkey’s illegal drilling in the region is unacceptable.

“We want to make sure that rules govern international exploration in the Mediterranean Sea’s energy resources and that no country can hold Europe hostage,” Pompeo said.

“We have told the Turks that illegal drilling is unacceptable, and we’ll continue to take diplomatic actions to make sure that we do, as we do always, ensure that lawful activity takes place,” he added.

The US official said his country was working “to get the parties, everyone, to deescalate and find outcomes that are mutually agreeable.”

A written statement by the Ministry for Europe and Foreign Affairs of France said that the arrival of a new Turkish drilling ship in the Cypriot exclusive economic zone (EEZ) is a violation of the sovereignty of the Republic of Cyprus and international law and that it was “an unfriendly move, likely to encourage an escalation of tensions in the Eastern Mediterranean.”

According to the announcement, Minister for Europe and Foreign Affairs Jean-Yves Le Drian had the opportunity to discuss this situation with his Cypriot counterpart Nicos Christodoulides and expressed France’s full and complete solidarity.

Italy also expressed concern and the hope that “Turkey will revert to a more constructive stance as soon as possible.”

“Italy is concerned about the illegal operations carried out by the Turkish vessel Yavuz in the exclusive economic zone of Cyprus, south of the island,” a press release issued on Saturday by the Italian Foreign Ministry said and added: “We reiterate our request to respect the sovereign rights of Cyprus and to refrain from illegal actions in the area.”

But in the face of these statements Erdogan said during a meeting of his AKP party in Kizilcahamam in the Ankara province that Turkey will continue her drilling activities in the eastern Mediterranean.

“With three drilling rigs that will be entirely ours we will have no problem looking for drillrigs from the international market to rent,” he said.

He said the Fatih drillship, that has been carrying out drilling off Paphos since May 3, has reached 4,000 meters so far while the Yavuz “which we added to our fleet this year, after completing its mission in Karpasia, we sent it to the Morphou-1 well.”

Earlier in the day Greek Prime Minister Kyriakos Mitsotakis told Pompeo during their meeting that Turkey is violating the sovereign rights of Cyprus and urged the US to use its influence to defuse tensions in the Eastern Mediterranean.

Mitsotakis said that Turkish moves south of the island in recent days were a “flagrant violation” of Cyprus’ sovereign rights.

“Cyprus is only asking for the self-evident, the implementation of international law,” Mitsotakis said.

He said that the illegal attempt of Turkey to drill in the Cyprus EEZ was part of its tactics to create fait accompli – a tactic which violates the international Law and the Law of the Sea.

“We will not follow Turkey in the path of the escalation of tension. We will not allow the East Mediterranean to return to the days of the 19th and of the early 20th century, with the presence of gunboats,” Dendias stressed.

The drillship’s move follows strong reaction by Turkey to the announcement last month that Cyprus signed agreements with France’s Total and Italy’s Eni for exploration in block 7. Turkey said at the time that a section of block 7 was within the Turkish continental shelf, which had been registered with the UN and that it would not allow any foreign country, company or vessel to engage in unauthorised hydrocarbon exploration and exploitation activities within its maritime jurisdiction areas.

The Cypriot government, Greece, the UK and the EU condemned the latest Turkish move on Friday with EU High Representative Federica Mogherini discussing with Foreign Minister Nicos Christodoulides the possibility of targeted measures. It was also decided that the issue will be on the agenda of the next Foreign Affairs Council on October 14 in Luxembourg and at the next EU leaders’ summit between October 17 and 19.

On Friday the EU urged Turkey to respect the sovereign rights of Cyprus as targeted measures were discussed in light of Ankara’s continued drilling activities in the island’s EEZ.

“Turkey’s actions come at a moment when intensified efforts are ongoing for the resumption of Cyprus settlement talks under the auspices of the United Nations Secretary General. It remains crucial to ensure a conducive environment for these talks,” a statement said.