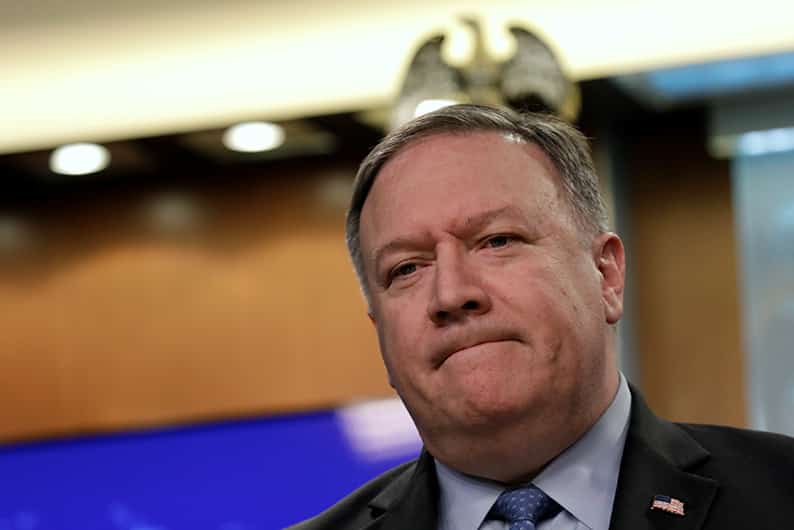 A statement by US Secretary of State Mike Pompeo on Turkey’s illegal activities in Cyprus’ EEZ is a powerful message, President Nicos Anastasiades has said.

In statements with his Greek counterpart Nicos Dendias, during his visit to Athens on Saturday, Pompeo said: “We cannot let Turkey proceed with illegal drillings”.

Anastasiades made his comment on the sidelines of the Cyprus-Russia Gala, at the presidential palace, late Saturday.

He said that after the announcement by the head of EU`s diplomacy Federica Mogherini and his telephone communication with European Council President Donald Tusk, the Council of Foreign Affairs would review the situation, while he would also brief the European Council himself on October 14 after which some decisions would be taken.

On Pompeo’s statement, the president added: “This is a powerful message. It is also the result of the coordinated efforts of Cyprus and Greece, in this particular case, certainly, of Greece.”

After a speech at the Stavros Niarchos Foundation Cultural Centre, in Athens, Pompeo was asked by journalists whether the US was planning to proceed to the implementation of sanctions against Turkey due to its activities off Cyprus.

The US Secretary of State responded that Washington would continue its efforts to persuade Turkey that these actions are in nobody’s interest.

“The dispute must not be militarised”, Pompeo said, while adding that the illegal drillings are unacceptable, as they violate the international legality.

According to a navigational warning issued by Turkey, Turkish drillship Yavuz, which has returned to Cyprus’ EEZ, will carry out drilling operations inside block 7, located off the south-western coast of Cyprus. Block 7, has been licensed by the government to France’s Total and Italy’s ENI for drilling operations.

Yavuz, was anchored off the island’s north-eastern coast on July 8 and operated within the territorial waters of the Republic of Cyprus, until September 17, when it departed for a Turkish port in Mersin.

Turkey issued a navigational telex (Navtex), announcing its intention to start drilling off Cyprus and since May 4, 2019, the Turkish drillship “Fatih” has been anchored 36 nautical miles west of Akamas peninsula. The area falls within Cyprus’ EEZ and continental shelf.

Ankara extended the Navtex until November 1, 2019. Cyprus has called on the Yavuz and its supporting vessels to immediately cease its illegal activities.

Anastasiades also commented on Saturday on the efforts to resume Cyprus negotiations. Asked whether he had any information as to the intention of UN Secretary-General Antonio Guterres to convene a tripartite meeting with Turkish Cypriot leader Mustafa Akinci, he said, “not directly. “There have been a number of ideas floated. Certainly, it would be around November in a European capital,” Anastasiades said.”

Vision EQS looks to the future

Trucks and buses to be checked in week-long police campaign