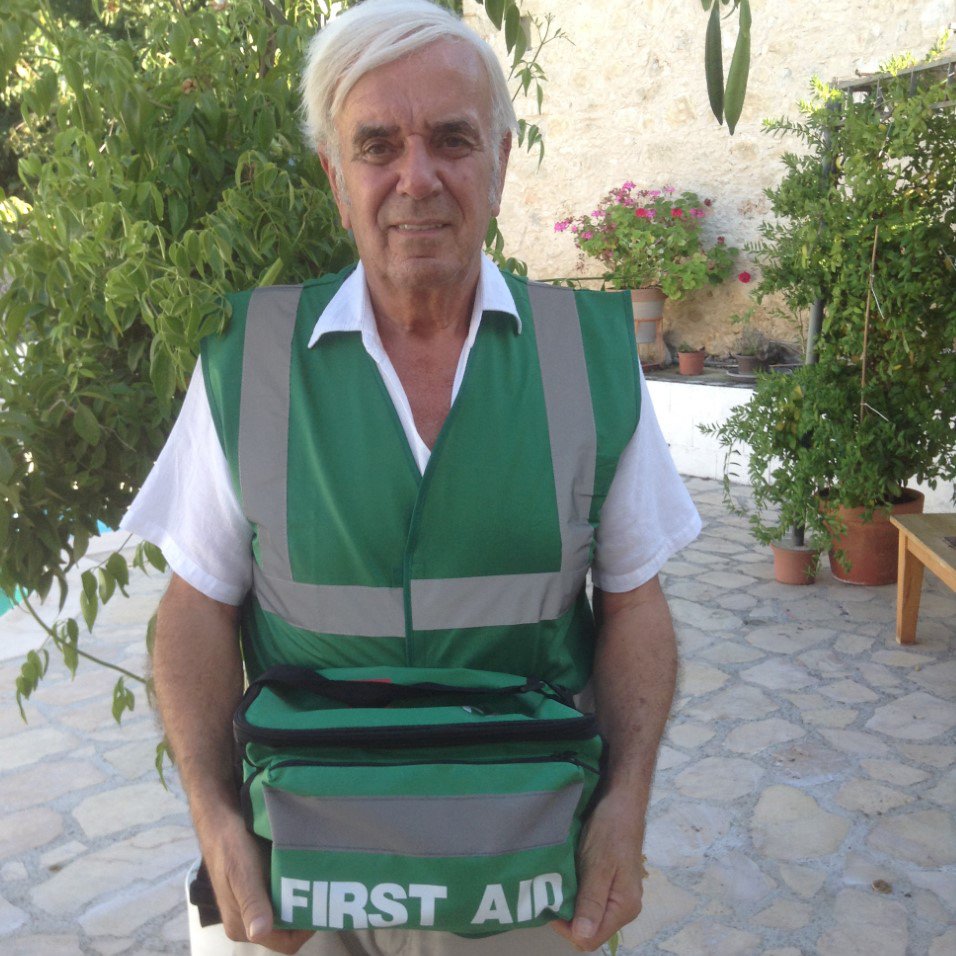 Justen Karlsson with some of his first aid kit

When 67-year-old Justen Karlsson realised that it can take up to 25 minutes for an ambulance to reach a sick or injured person in Lysos, the village near Polis where he lives, he knew what he should do.

As an advanced first aider with decades of experience with the St Johns Ambulance charity in the UK, he was confident he could put his expertise to good use and help his fellow villagers by offering a free first response service.

“I was at the local coffee shop and someone mentioned that a villager had been waiting for an ambulance for the last 25 minutes and it still hadn’t arrived. They said ’he could be dead before it gets here.’ That got me thinking and I came up with this idea,” he told the Sunday Mail.
That idea is ‘Community First Responders’, a new non-profit organisation covering Lysos and the surrounding area. The costs will be covered by fund-raising events, the first of which will be held on October 19.

“I want to provide patients with a first aider to give treatment while waiting for paramedics or a doctor to arrive. As an advanced first aider, with certificates in AED [defibrillator] use and CPR [cardiopulmonary resuscitation], I decided to set up Lysos First Responders covering my own village and villages within a 10 min drive. “

His long experience with St Johns Ambulance in the UK, the country’s leading first aid charity which often works alongside the NHS, made him the right man for the job.

In preparation of the new initiative, he also decided to ‘train up’ on the very latest techniques available and has successfully completed a number of accredited online courses, where the UK instructor is an accident and emergency doctor.

“The advanced first aid course took me two weeks to complete. A lot of the information I already knew, and I have spent the last four months getting ready and taking various courses,” he said.

The latest of these includes a paediatric course and one on using an automated external defibrillator (AED) an emergency life-saving device used to help people experiencing sudden cardiac arrest. It administers an electrical charge to the heart, if needed, to establish a regular heartbeat

“Emergency defibrillation is vital, as only within the first few minutes following cardiac arrest will a victim be in a ‘shockable rhythm’,” he said.

Placing AED’s in communities can dramatically reduce the time from collapse to defibrillation and can greatly improve survival rates, he added.

“I don’t want to be known as a medical person and obviously I’m not, but as a first aid person that is available to help others until professionals arrive,” he said.

“Community first responders will be able to offer services in cases of heart attack, stroke or to help anyone in need of urgent assistance before an ambulance arrives.

“This area also has a lot of farmers and forestry workers and many people who work with machinery. A quick response can mean the difference between life and death.”

He added that he is hoping to have three people on call on rotation to cover all day, every day.

“One of my next door neighbours, a British women who is a ‘first aider’ is doing the courses that I did and we need a third person, at least, if anyone else that lives in the area is interested in getting involved, please get in touch” he added.

He is able to access the courses for any would-be volunteers for free. These are very thorough courses and at the end of each module, participants must score at least 96 per cent on each.

The initiative will be active for patients from next January, giving enough time to ensure everything required is in place. This includes public liability insurance which will provide cover for the volunteers in the event of any claims made. The policy will be paid for from funds raised.

“We also have a great local doctor involved, who is currently sorting out any necessary actions required by the ministry of health.”

The doctor will also keep volunteers updated on any new advances, he said.

Karlsson is so committed to the venture that he is using his own car, a Toyota Rav, as the vehicle used for ‘call outs’. It will be insured for all of the volunteers and magnetic ‘first responders on call’ stickers have already been ordered for the vehicle.

Karlsson will cover most of the vehicle costs himself including insurance, as his wish is to ‘give something back to the community he lives in.’

The local community is getting behind the idea and a number of items have already been donated.

“So far we have a blood pressure and pulse monitor, an oxygen monitor, a 250-piece first aid kit, three first responder hi visibility waistcoats and a dedicated mobile phone,” he said.

He is now aiming to raise funds for an AED defibrillator that costs around 1,500 euros and is the aim of the first charity night to be held at The Paradisos Hills Hotel in Lysos.

The event on October 19, will see a live band, ‘J’Dee’ perform, and a meal included in the 20-euro ticketed event. A grand raffle will also be held.

A second, similar fund-raising event will be held at the hotel on November 1 to celebrate Halloween.

A dedicated Facebook page is imminent and Kaarlsson also hopes that a website, which will also contain helpful advice of what to do in a variety of emergency situations, can be developed.

Heavy rains prompt highway drivers to pull over (with video)

Cyprus 18th in EU in interest for fake designer gear