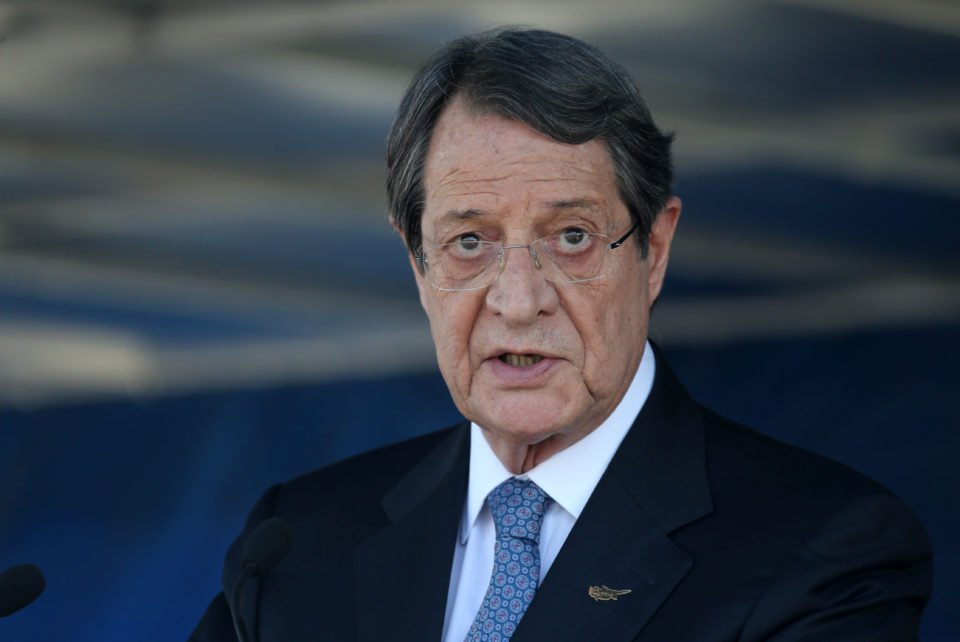 Man in a hurry to return: Prez Nik

IF IT HAD not been for the broken windshield of the Boeing 737 800 bringing Prez Nik and his entourage back to Kyproulla from New York his super-luxury means of air travel would not have become public knowledge. Rumours had been circulating about the use of a Saudi-owned Boeing for his official travels but official confirmation was given last Sunday after the jet was forced to return to JFK airport for repair, three hours after it had taken off.

Initially, when reporting the story nobody mentioned an airline or flight number for the plane on which Nik and his entourage were flying, raising questions about which the presidential palace had to grudgingly come clean. Yes, the government had chartered a private jet, through a bids procedure, said spokesman Prodromos Prodromou, and the company that won the deal had to provide another private jet for Nik’s return to Kyproulla. He had a parade to attend.

The only problem was that most of his 17-member entourage had to wait for the Boeing to be fixed to return. Nik, Mrs Prez, our golden boy Nicos Christodoulides and PP were put on a smaller, super-luxury jet, the type used by billionaires, and flown directly from JFK to Larnaca in a journey that took nine-and-a-half hours.

We could not find out whether one of the Prez’s daughters, who was among his entourage, flew with mummy and daddy or returned on the next day’s flight with the less important officials.

IN COMMENTS made to Politis before he boarded the super luxury second jet, PP was at pains to convince that the use of the private Boeing made economic sense. The price offered by the company, he said, was no different from the total cost that would have been paid to a commercial airline for all 17 members of the presidential delegation.

He omitted to mention what this cost actually was, thus encouraging people to believe that 17 return tickets from Larnaca to New York, including first class seats for Mr and Mrs Prez, would cost as much as chartering a Beoing 737, with a stopover in London.

Quoting “other government sources” (probably PP but requesting he did not go on the record), Politis said the procedures for the chartering of the plane were those followed whenever “it was deemed necessary for official travel to be by private jet.” The other government sources, said there were usually three or four companies from which offers were requested and added: “In this case three companies put in bids but the two did not have the planes to carry 17 people and when an offer was asked for the Boeing the price was lower than the previous times.”

When a private jet is used a lot of times, the charterer could occasionally charge a lower price. And the Saudi-owned Boeing 737 is not used sparingly as the “other government source” implied. If it were, it would not be stationed at Larnaca airport.

THE MAN in charge of low-level rusfeti operations at the presidential palace, under-secretary to the president Vasilis Palmas revealed on a radio show on Monday that the owner of the Boeing 737 was Jetstream Aviation. He was full of praise for Prez Nik as he “often chooses to travel on commercial airlines, which often are not direct as in the case of Brussels.”

He was the only head of state that travelled to Brussels in this way, said Palmas. Was he sure this is the case, because according to our establishment’s information Nik uses a private jet even to fly to Athens. It is very hard to believe that the head of the Republic would subject himself to the inconvenience of a stopover and change of plane when flying to Brussels.

Meanwhile, less important leaders like Greek Prime Minister Constantinos Mitsotakis flew to the US for the UN General Assembly on a commercial flight and sat in economy – he posted pictures of his and his wife’s boarding cards on Instagram. If only he had flown to Kyproulla he could have hitched a ride on Nik’s private jet.

THE “OTHER government source” also told Politis that the private Boeing cost only €60,000. It did not specify if this was one-way or included the return journey.

This is also hard to believe, considering when the late comrade Tof was president he chartered a private jet at a cost to €300,000 for 50 flight hours, which meant we paid €6,000 per hour. And this was not for a Boeing but for a small private jet that took six or eight passengers.

If our government paid €60,000 for a Boeing 737 on a return trip to New York with an overnight stopover in London on the outbound journey it was the bargain of the decade. Assuming it was 10 hours to get there and 10 hours return (we’ll ignore the stopover) that is 20 flight hours, which would mean we paid €3,000 per hour for the Boeing while Tof was paying double that amount for a private jet one fourth the Boeing’s size.

THE GOOD news is that our incorruptible, holier than thou, auditor-general Odysseas has undertaken to investigate the prez’s trips on private jets. This would be the second time he had taken such a decision, the first being abandoned under peculiar circumstances – there was no public announcement at the time.

On Wednesday, however, Odysseas sent one of his minions to the palace to collect all the information related to the prez’s use of private jets. He will look at all the trips made by Nik this and last year, how many were on private jets, the destinations and the total costs. He will also examine what procedures were followed before a chartering company was chosen, what type of aircraft was chosen, who accompanied him on the plane and from which state fund the payment was made.

He could also try to establish who the owner of the Boeing was, and which law office he is a client of because there are a lot of rumours circulating. Also, when Nik used the Boeing to fly en famille to the Seychelles last year who paid for it?

The previous two times Odysseas investigated the activities of the Prez (Ryan Air and the Pera Pedhi development) he found absolutely nothing wrong or irregular, prompting some mean-spirited individuals to falsely claim his investigations were a whitewash. Will he make it a hat-trick?

IF VAT was charged every time a new acronym enters our daily life the government would be able to buy a private jet for our Nik. We have Okypy, Oay, Gesy, Kedipes, Sedipes to mention just a few of the more recent ones.

Kedipes is the public company set up by the government to try to recover all the Cyprus Co-op Bank’s NPLs that Hellenic Bank did not want when it took over the bankrupt CCB. Now Kedipes is advertising for a new CEO, a position held by Stavros Iacovou with the title of acting CEO. Iacovou, a fitness fanatic with muscles like the Incredible Hulk, was transferred from the CCB to head Kedipes last September.

Iacovou had been in the senior management team of Nicholas Hadjiyiannis, the CEO that oversaw the collapse of the CCB, hardly credentials for the post of CEO of Kedipes. If he failed as part of the senior management team to reduce the NPLs of the CCB why would anyone think he would do any better as the boss of a company the sole objective of which is to recover NPLs? Has he now been asked to use his muscles for this purpose?

STAYING on banking issues, by what logic has the head of the Inland Revenue Department decreed that the compensation package that would be paid to the employees of the Bank of Cyprus that opt for the voluntary retirement scheme will not be taxed?

He obviously had instructions from the government but that does not make his decision any easier to digest. In effect, the tax department will be subsidising the B of C’s retirement scheme by waiving its right to tax the pay-off, which is set at a maximum of €200,000, thus making it even more attractive for the bank’s fat-cat employees, most of whom will also be collecting several hundreds of thousands from their provident fund on leaving.

Why is it the Inland Revenue extends such largesse only to overpaid bank employees? I am sure there is a very good reason that I am too stupid to think of.

THE TURKS took their violations of the Cypriot EEZ to another level on Thursday when they announced the Yavuz drillship would be carrying out exploratory drilling in an area southwest of Kyproulla, which they claim as part of their continental shelf and includes a big chunk of block 7 which the Republic licensed to the Eni-Total consortium.

Government spokesman PP said the government was “utilising all political, diplomatic and legal means at its disposal” to counter Turkey’s provocative and illegal actions. These means have not proved very effective and nor has the upgrading of our strategic importance secured by our visionary foreign minister Nicos Christodoulides, who also wanted to arrest everyone involved in Turkey’s drilling operations.

Is it a coincidence that every time Prez Nik finds some new excuse to avoid engaging in talks with Mustafa Akinci the Turks step up their violations? The latest provocation followed his escape act in the Big Apple where he met the UNSG but was non-committal about structured talks.

If he pulls off another escape act, do not be surprised if the Turks send the Yavuz to Limassol marina to drill for natural gas.

“ATHENS was frightened…” was the headline of the report in Phil decrying the failure of the Mitsotakis government to send Greek fighter jets to fly over our Independence Day military parade on October 1. The overflight of the fighters “had symbolic significance and sent a message to the other side, to the Turkish occupier,” said the inconsolable writer.

The decision by the Greek government was taken on the morning of the parade, claimed the writer, after the intervention of Ankara asking “what is the message to Turkey when Athens appears frightened?” The writer admitted he had no confirmation there had been a Turkish intervention, but “this appears to be the only explanation.”

Well there are plenty of other explanations. One is that the Greek government decided that it will not engage in meaningless actions such as sending two fighter jets to fly over a military parade and claim this has symbolic significance. As for the message to the Turkish occupier, the Mitsotakis government can send it by post which is a lot cheaper, or, if it is an urgent message, by same day delivery, using our Prez’s private jet.

Our View: Cyprus being forced into a corner by gunboat diplomacy

North Korea breaks off nuclear talks with U.S. in Sweden