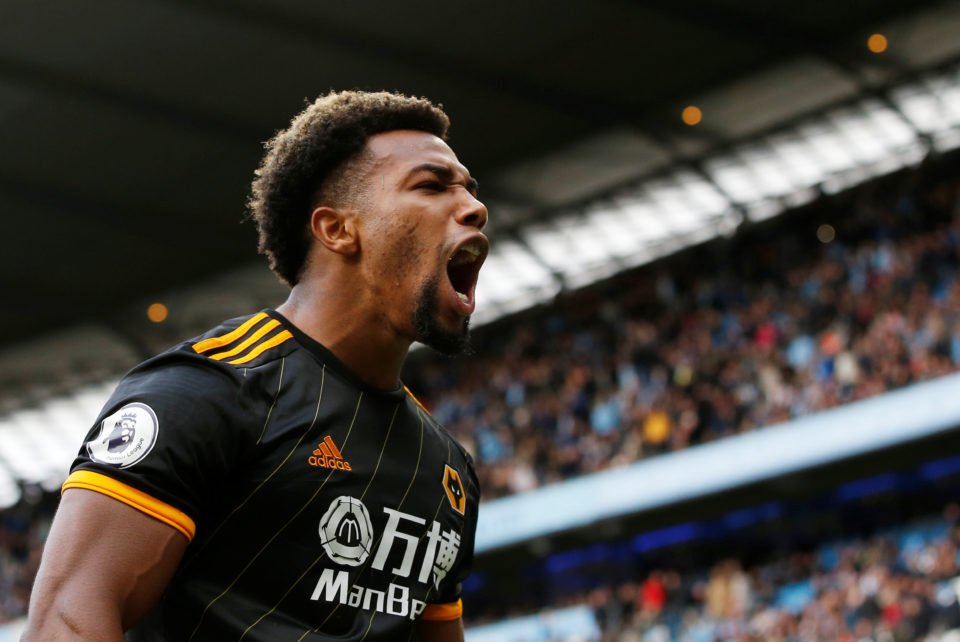 Wolves forward Traore struck twice in the final 10 minutes to condemn the champions to their first home league defeat since they lost to Crystal Palace on Dec. 22.

Yet it was City’s second defeat in their last four league games following the 3-2 loss at Norwich City last month and it will increase Liverpool’s belief that they can win their first league title in 30 years.

With Juergen Klopp’s side having won all eight of their games so far this season, the Nov. 10 clash with City at Anfield is already looking like a game which could have a major impact on the destiny of the title.

The win was a massive boost for Wolves, who have endured a tricky start to the season due to their early commitments in the Europa League. It was just their second victory of the campaign and their first on the road.

City looked shaky at the back throughout the game with Wolves having three good chances to open the scoring in the first half after waltzing through the makeshift central defensive pairing of Nicolas Otamendi and Fernandinho.

As early as the fifth minute, City’s defence was ripped wide-open with Patrick Cutrone bursting through on goal before shooting meekly wide.

Then Ilkay Gundogan gave the ball away to allow Raul Jimenez to break free, but the Mexican’s shot was blocked by Fernandinho and Cutrone’s follow-up struck the Brazilian’s head.

Otamendi was at fault in the 22nd minute, his sloppy pass allowing Jimenez to burst clear again, but this time it was their Brazilian keeper Ederson who saved their blushes, rushing out to foil the Wolves striker.

Yet Pep Guardiola’s side also lacked their usual sharpness in attack and the nearest they came to scoring was a 67th-minute free kick from David Silva, which struck the bar.

As so often, City had plenty of possession, but unusually they could not make the most of it, with poor crosses into the box and little of the crisp-passing that so often characterises their play.

The decisive blow came when Jimenez broke from deep in his own half, skipped past Otamendi and found Traore who kept his cool to beat Ederson.

Traore then added the second, deep in stoppage time, after Jimenez found him again through the exposed City defence.

Arsenal moved up to third in the Premier League standings after David Luiz scored his first goal for the club in a nervy 1-0 win at home to Bournemouth on Sunday in which the visitors missed a flurry of chances to level in the second half.

The former Chelsea defender darted across the area undetected to glance a Nicolas Pepe corner into the far corner to give Arsenal the lead in the ninth minute.

Arsenal’s record signing Pepe came close to doubling their lead with a shot that just missed the top corner while Pierre-Emerick Aubameyang also saw a shot from distance flash just wide in the first half.

Bournemouth, who were beaten 5-1 on their last trip to the Emirates Stadium, produced a cagey display in the first period although they nearly equalised when Dominic Solanke narrowly missed the target with a header from a free kick.

They showed far more ambition in the second half while Arsenal lost focus but failed to take their chances, with Callum Wilson mis-placing a pass in the area after rounding Bernd Leno and later seeing a shot tipped over by the German goalkeeper.

Wilson missed two further chances in the closing stages. Steve Cook headed over from a corner as Arsenal somehow clung on for the victory, moving above Leicester City into third on 15 points, nine behind leaders Liverpool after eight games.

Chelsea closed in on the Premier League’s top four and their in-form striker Tammy Abraham scored his eighth league goal of the season after an excellent first-half performance helped them to a 4-1 win at struggling Southampton on Sunday.

The result lifted Chelsea into fifth place on 14 points from eight games, behind fourth-placed Leicester on goal difference, while Southampton stayed 16th on seven points, one point above the relegation zone.

Abraham fired Chelsea ahead in the 17th minute as he latched on to a clever pass from Callum Hudson-Odoi and looped his shot over advancing keeper Angus Gunn, with the ball crossing the line before Maya Yoshida’s desperate clearance.

Mason Mount blasted the ball past Gunn in the 24th after taking a fine Willian pass in his stride before Danny Ings pulled one back for the Saints, poking the ball in from close range after Yann Valery’s darting run.

More slack defending from the home side allowed Chelsea to restore their two-goal advantage shortly before halftime, when N’Golo Kante’s fierce shot from outside the penalty area took a deflection off Pierre Hojbjerg.

The pace dropped in the second half as Chelsea packed their midfield before late substitute Michy Batshuayi, who came on for Abraham, put the icing on the cake for the visitors with a clinical 89th-minute finish.

‘Joker’ laughing all the way to the bank with $93.5m debut