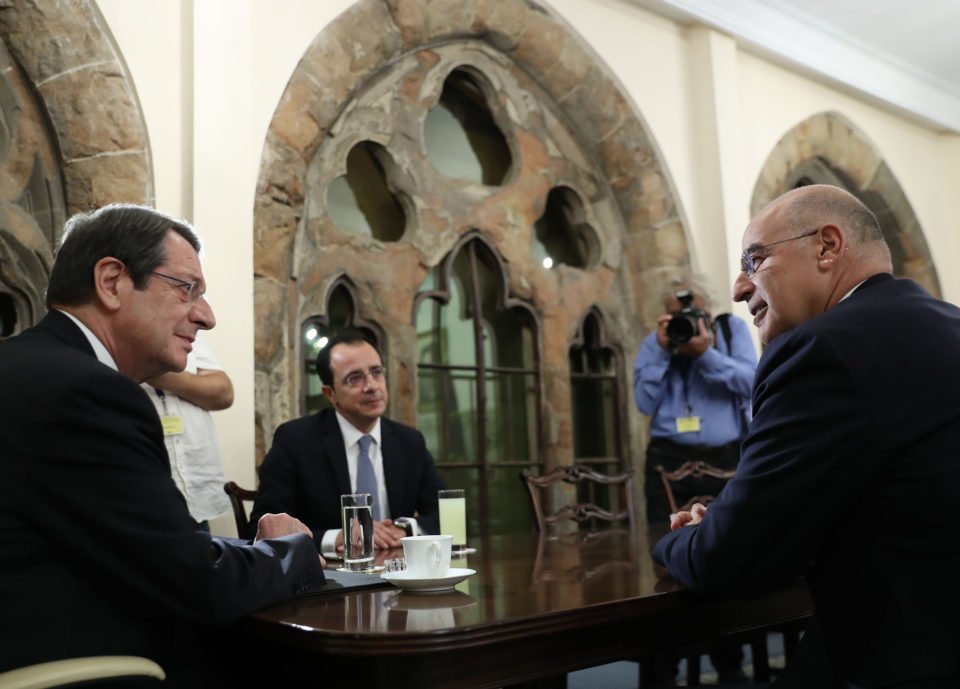 Greek Foreign Minister Nicos Dendias said on Monday Turkey was a troublemaker entrenched in the dead ends of its own misguided choices, as Ankara’s drillship Yavuz was set to begin drilling inside Cyprus’ block 7, which has been licensed to French and Italian giants Total and Eni.

Speaking after a meeting with his Cypriot counterpart during a lightning visit to Nicosia, Dendias said “Cyprus is not alone.”

“We spoke during a juncture in which the unacceptable Turkish provocations and illegal activities against the sovereignty and sovereign rights of the Republic of Cyprus continue, and unfortunately intensify,” Dendias said.

The Greek diplomat said gunship diplomacy has long gone and “militarisation and artificial escalation of an already tense situation is the refrain of a troublemaker entrenched in the dead ends of his own bad choices.”

During the visit, the two countries decided how to tackle Turkey’s actions at a political, diplomatic and legal level.

“Certain very specific decisions have been made whose implementation has already started,” Foreign Minister Nicos Christodoulides said, without elaborating.

Speaking at an energy conference in Turkey on Monday, Donmez said the Yavuz had reached its location ‘Guzelyurt-1’ (Morphou-1). “All preparations have been completed, and it [Yavuz] will start its first drilling in the area either today or tomorrow,” Donmez said.

“Ahead of its second mission, Yavuz carried out its operations at the Karpaz-1 [Karpas] well, located in the Bay of Gazimagusa [Famagusta],” he added.

Referring to “claims” that Turkey’s activities were a flagrant violation of international law, Donmez said Ankara’s legitimacy and just stance was documented with the UN.

“We shall not allow energy piracy in the Eastern Mediterranean. Turkey is not a country that can be excluded or pushed aside in this region. We shall continue to pursue our rights stemming from international law,” he said. Donmez said that Turkey would continue to maintain a key role in the region’s energy markets.

The Turkish Minister said that “the whole world must understand Turkey’s determination and seriousness in the Mediterranean”.  He said Turkey would protect the rights of the Turkish Cypriots “to the end”.

Maps published in Turkey’s official gazette show that oil drilling permits issued to the Turkish National Oil and Gas Company (TPAO) stretch as far as the Greek island of Rhodes as well as blocks 1, 4, 5, 6 and 7 as delineated in the Cyprus Republic’s EEZ, south and south-west of the island. Turkey also supports the Turkish Cypriot claims in the Republic’s blocks 1, 2, 3, 8, 9, 12, and 13, including within few kilometres from the Aphrodite gas field in Block 12.

“The last thing our strategic partners can criticise is Turkey’s non-compliance with international law,” said Donmez.  “No power will hinder our work. We will search and investigate,” he added.

Government spokesman Prodromos Prodromou told CNA on Monday that during the EU summit next week, President Nicos Anastasiades would inform his EU counterparts.

It would then be discussed by EU leaders and there would be a relevant reference in the conclusions of the European Council. The issue will also be discussed at the EU Foreign Affairs Council on October 14.

Anastasiades had spoken to Council President Donald Tusk about including it on the agenda in order to adopt a collective position.

Tusk tweeted on Monday that he was in constant contact with Anastasiades, as he voiced his support.

Over the weekend, international players came out in condemnation of Turkey’s latest moves, including US Secretary of State Mike Pompeo who called it unacceptable and a violation of international law during his visit to Athens.

Prodromou said Pompeo’s position was “unequivocal” and important “taking into consideration the extent and the influence of US diplomatic means.” Anastasiades called it a powerful message to Turkey.

Russia and Israel have also expressed concern.  “We urge [Turkey] to refrain from the steps leading to destabilisation and build-up of a potential crisis in the Eastern Mediterranean, strictly adhere to the principles of the international law, and strive to resolve disputed issues exclusively by peaceful means,” a statement from the Russian embassy said.

“Friends should stick with each other,” he said.

Anastasiades has also been in touch with French President Emmanuel Macron on the issue.

The two agreed to remain in constant contact in view of the upcoming European Council meeting after discussing ways of reacting to Turkish activities.

French ambassador to Cyprus Isabelle Dumont visited the naval base in Mari on Monday morning and though she did not address Turkey’s activities, did stress the importance of the Franco-Cypriot defence cooperation.

In addition, both the French and Italian delegations taking part in the 18th Autumn Meeting of the OSCE Parliamentary Assembly in Marrakesh at the weekend issued a joint statement condemning Turkey`s illegal actions.

She was speaking ahead of the Cyprus, Greece and Egypt Summit that will take place on Tuesday, in Cairo, which will be attended by Anastasiades with his Egyptian counterpart

Five talking points from the weekend in La Liga