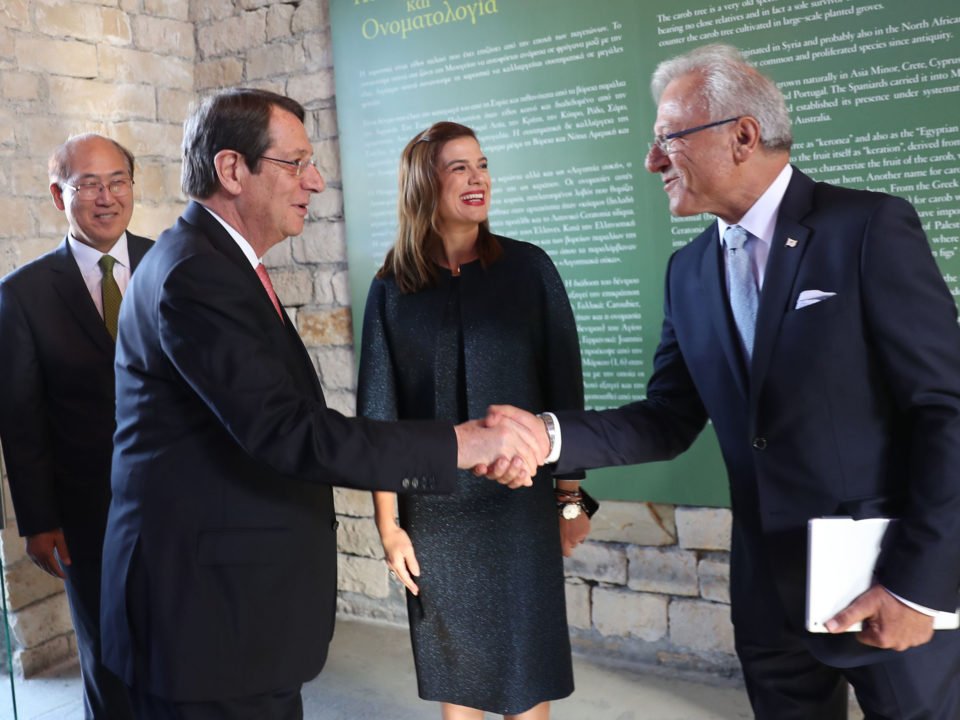 President Nicos Anastasaides arrives at the opening of Maritime Cyprus

Environmental protection and sustainability were two of the main topics at the opening of the 16th Maritime conference in Limassol on Monday, aptly named ‘Sea Change’.

President Nicos Anastasiades opened the three-day event which takes place every two years with a speech focused on the achievements that Cyprus already reached in the shipping industry and with an eye on the ever-changing future of the maritime world.

“We are very proud of the achievements of Cyprus’ Shipping which has been firmly established as one of the most qualitative, modern and complete international shipping centres, ranking 11th worldwide and 3rd in Europe in ship registries,” the President said.

“We will continue to actively and constructively participate in the future evolution of the International Maritime Organisation (IMO), including on implementing new strategies, such as improving maritime safety and environmental protection.”

Anastasiades also praised the work of the deputy shipping ministry, established by the government in March 2018 and represented at the conference by Minister Natasa Pilides.

Pilides said that the creation of her ministry has been “a catalyst for change.”

“Companies in Cyprus have been proactive in helping us provide a safer, cleaner and more dynamic industry. We are embracing innovation, the industry’s aim is to continue to be productive while becoming safer and greener,” she said.

The EU Commissioner for Transport Violeta Bulc praised Cyprus for its commitment to improve the shipping industry.

“Cyprus commands respect for its efforts in changing their ways, their willingness to strive for solutions in protecting the environment have not gone unnoticed,” she said.

The conference hosted a panel of maritime industry law makers, who addressed an expert and competitive audience from all over the world.

The IMO Secretary General Kitack Lim was one of the key speakers and stressed the importance of making changes to the maritime industry in order to create a better future for younger generations.

“The maritime environment is facing tremendous challenges, like the rising water levels in our seas, the acidification of the water and the plastic pollution. It’s clear that the shipping industry needs to change now,” he said.

“The shipping industry is actively participating in creating an action plan to tackle climate change. By 2050, the IMO plans to cut fuel emissions by 85 per cent.”

Lim attended the UN Climate Action Summit held in September in New York and noted how “the protection of the environment is now the most important topic in the world.”

“We must embrace it, we must change our ways and we must do it fast. The use of alternative fuels must be explored and implemented urgently.

“We need to commit to progress, future generations will thank us for making their world better.”

However, shipowners present at the conference also spoke about the challenges that such changes would bring to the shipping industry.

Cyprus Union of Shipowners President Andreas Hadjiyiannis argued that “the demand for speed in the shipping industry makes it impossible to reduce emissions further.”

A thought that was shared by George Procopiou, chairman of Dynacom Tankers Management, one of the most important oil tankers companies, based in Athens.

“We need to revisit our priorities as a society. We can’t demand fast shipping and at the same time call for alternative fuel that, at this point, cannot compete with the traditional one in terms of speed. By refusing to sacrifice some of our comforts, we fall into hypocrisy.”

US withdraws troops from northeast Syria ahead of Turkish offensive