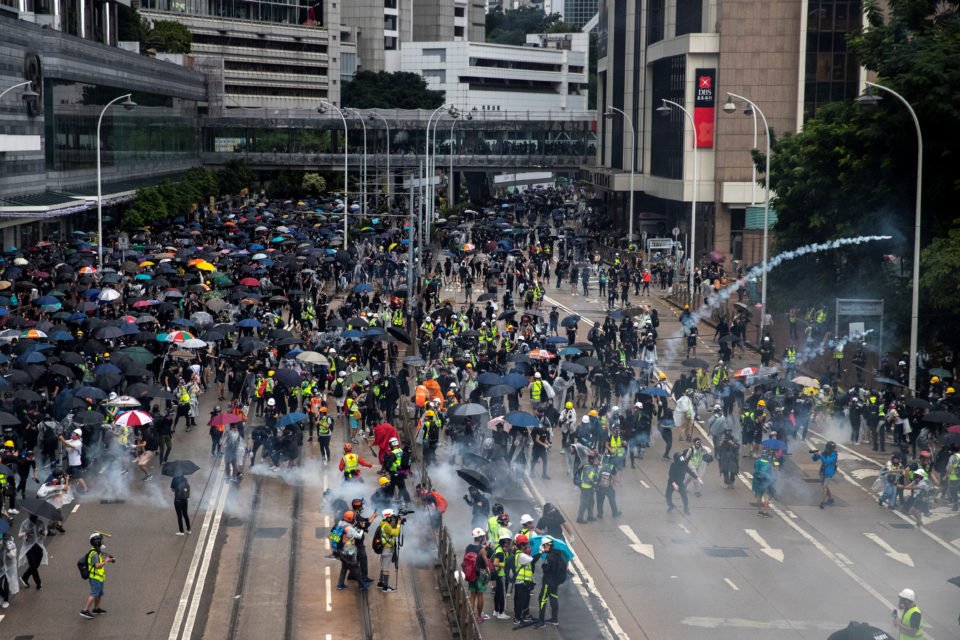 Protest-scarred Hong Kong struggled to recover on Monday after scores of people were arrested in violent clashes overnight and as the last British governor of the Chinese-ruled city warned that people could be killed.

After four months of massive and sometimes violent protests, two protesters have been shot, one in the chest and one in the leg. Authorities said the shootings were not intentional but occurred during skirmishes between police and protesters.

Many protesters, police and journalists have been injured in clashes, with police using rubber bullets, tear gas and water cannons against demonstrators, some of whom throw bricks and petrol bombs.

A journalist working with Hong Kong‘s public broadcaster was recovering in the hospital on Monday after being hit by a petrol bomb on Sunday night.

On Monday, Hong Kong‘s metro rail system was only partially functioning, with many stations torched in protests, and many shops and Chinese banks extensively damaged.

The Sunday night protests, the second night of violence since the imposition of colonial-era emergency laws on Friday, saw scores of protesters arrested and the first warning from Chinese military personnel stationed in the territory.

Tens of thousands of protesters, many families with children, marched peacefully through the centre of Hong Kong on Sunday, wearing face masks in defiance of the emergency powers that threaten them with a maximum of one year in prison for hiding their faces.

However, police fired tear gas and used baton charges in an attempt to disperse protesters across the Asian financial hub, and the rallies deteriorated into running clashes as night fell.

Carrie Lam, the city’s leader, has said the face mask ban was necessary to end the violence by militant activists. But the move has been criticised by human rights groups and the United Nations, and has sparked more violent protests.

“She would have to be crazy to be making these decisions on her own without being pressured into them. The face mask business, absolutely madness,” said Patten, who handed Hong Kong back to China in 1997.

“I fear for the future, unless Carrie Lam actually intervenes and understands the importance of dialogue,” he added.

The protests have plunged the former British colony into its worst political crisis in decades and pose the biggest popular challenge to Chinese President Xi Jinping since he came to power in 2012.

The Hong Kong government said in a statement early on Monday, a public holiday in the city, that “public safety has been jeopardised and the public order of the whole city is being pushed to the verge of a very dangerous situation.”

What started as opposition to a now-withdrawn extradition bill has grown into a pro-democracy movement against what is seen as Beijing’s increasing grip on the city, which protesters say undermines the “one country, two systems” status promised when Britain handed Hong Kong back to China in 1997.

Hong Kong‘s rail operator, MTR Corp, said on Monday that because of “serious vandalism,” most of the stations in the network were temporarily closed. That included typically busy stations such as Admiralty and Wan Chai, around the city’s government offices and bar district.

MTR’s announcement followed an unprecedented shutdown on Saturday and minimal operations on Sunday, which largely paralysed much of the city.

The entire network, which typically carries about 5 million passengers a day, will shut at 6pm (1000 GMT) Monday, more than four hours earlier than normal, to allow for repairs, it said.

Grocery stores that had shut early on Sunday were mostly open by Monday morning. Many businesses and stores have had to close repeatedly during the protests, and Hong Kong now faces its first recession in a decade.

China’s Hong Kong military garrison warned protesters on Sunday they could be arrested for targeting its barracks with lasers.

The PLA has remained in barracks since the protests started, leaving police to handle the demonstrations, but the PLA’s top brass has warned violence is “absolutely impermissible.”