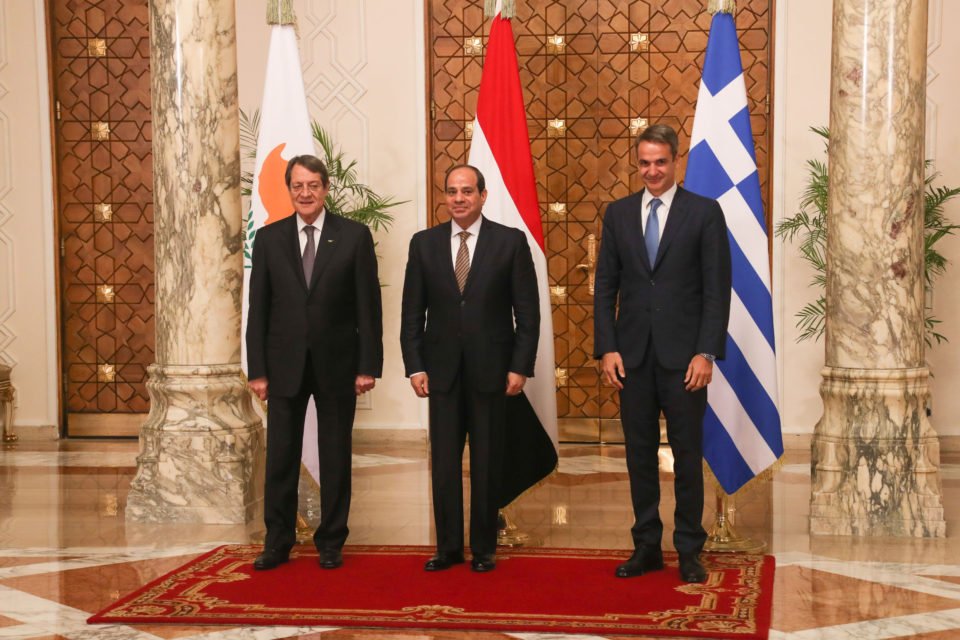 Greece and Egypt lent their support to Cyprus on Tuesday, calling on Turkey to cease its “provocative actions” in the eastern Mediterranean, including prospecting for oil and gas in the island’s territorial waters.

“The heads of state and government expressed their grave concern over the current escalation within the maritime areas of the eastern part of the Mediterranean, condemning the continuing Turkish actions in the exclusive economic zone of Cyprus and its territorial waters, in violation of international law,” read a joint statement released shortly after the conclusion of a trilateral summit in Cairo.

Last week Turkey dispatched a drillship to an area where Cyprus had already awarded offshore hydrocarbon exploration rights to Italian and French companies.

The leaders called on Turkey to terminate its provocative actions and to contribute constructively and in concrete terms for the  resumption of structured and result oriented negotiations for a comprehensive and sustainable settlement of the Cyprus problem on the basis of the relevant UN Security Council Resolutions.

Such a solution must be compatible with the Republic of Cyprus’ capacity as an EU member state and fully safeguard its independence, sovereignty, territorial integrity and security.

“To this end, the termination of the anachronistic security arrangements and the withdrawal of foreign forces remain a sine qua non for the Republic of Cyprus as a sovereign State. They stressed that the United Nations remains the only framework through which a settlement can be achieved.”

Speaking to the press after the leaders’ three-way meeting, Anastasiades said the summit underlined their desire to work together for regional peace, security and prosperity.

Referring to Ankara’s actions as gunboat diplomacy, he went on to thank his Greek and Egyptian counterparts for their steadfast support for a Cyprus rid of foreign occupation and guarantees.

The president said the discovery of hydrocarbons ought to contribute to unity and peace in the troubled region.

“We are confident that we shall have the strong of the European Union against gunboat diplomacy,” he said.

Anastasiades said the three leaders explored further ways of cooperating in the areas of defence, security, energy, tourism and the environment.

For his part, the Greek Prime Minister spoke of “deep-rooted ties” among the three Mediterranean nations.

Egyptian leader al-Sisi said the talks focused among others on boosting investment flows among the three countries.

During the trilateral, the seventh in a series, the heads of state agreed to establish an Executive Programme promoting investments in tourism, agriculture, shipping and environmental protection schemes.

Sisi welcomed the signing of an agreement between his country and Cyprus for the avoidance of double taxation.

Nicosia and Cairo meanwhile agreed to conclude a memorandum of understanding establishing cooperation between Cyprus’ foreign ministry and Egypt’s Institute for Diplomatic Studies, aiming to provide training to diplomats.

The three nations drew up a cooperation agreement on combating the illicit trafficking in cultural artifacts.

The heads of state also “recognised the importance of establishing an electrical grid between Egypt, Cyprus and Greece, such as the framework agreement between the Egyptian Electricity Holding Company and the Euro Africa Interconnector Company on 22 May 2019.”

In January, eastern Mediterranean countries meeting in Cairo, including the three which issued the statement, agreed to set up a forum to create a regional gas market, cut infrastructure costs and offer competitive prices, part of efforts to transform the region into a major energy hub.

Dig at ancient military site sheds light on its fortification