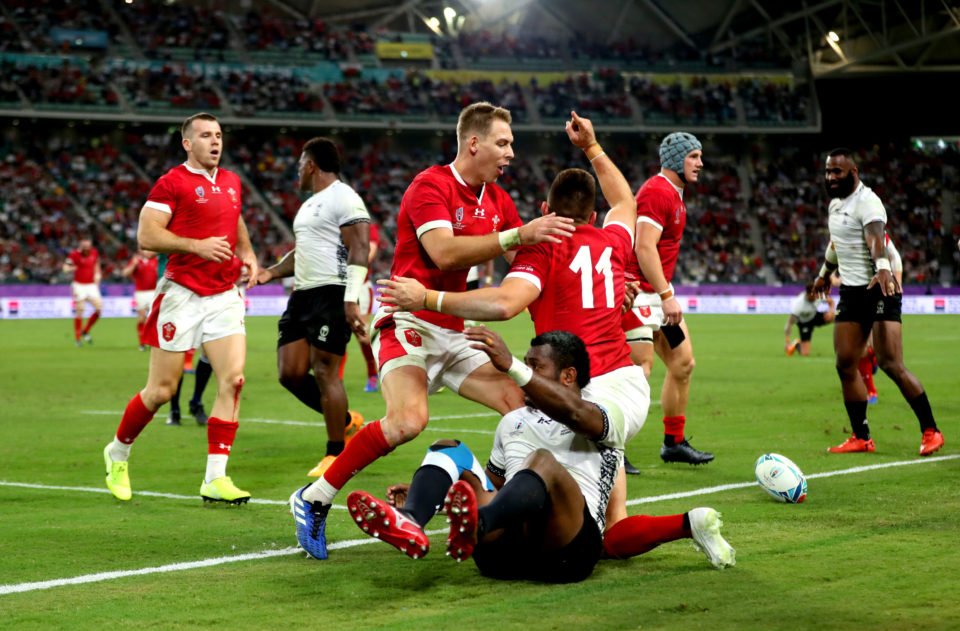 Wales survived a major fright to subdue flamboyant Fiji 29-17 at Oita Stadium and book their place in the World Cup quarter-finals.

But wing Josh Adams touched down twice before half-time and then completed his hat-trick to secure a potential last-eight clash against France.

Dan Biggar, who went off after a nasty collision, kicked two conversions and Rhys Patchell added a conversion and penalty, but Wales were pushed to the limit before full-back Liam Williams’ late try clinched a bonus-point triumph.

Fiji’s defeat means they are out of the tournament, yet they exited in style despite having two players sin-binned, by testing every sinew of Wales’ character and resolve.

Wales showed two changes in their line-up, with flanker James Davies and number eight Ross Moriarty both making their first starts of the tournament.

And Wales were then undone from an attacking scrum, with possession quickly moved and wing Tuisova applying a one-handed finish for a superb try.

Flanker Josh Navidi looked to have hauled Wales level two minutes later when he crossed Fiji’s line, but the score was ruled out for a knock-on by centre Hadleigh Parkes.

Fiji continued to stretch their opponents, though, and scrum-half Frank Lomani saw a try disallowed before Wales hooker Ken Owens was sin-binned.

Gatland’s side were all over the place and they conceded a second try when Murimurivalu touched down in the corner.

The Six Nations champions did not know what had hit them as Fiji began to evoke memories of their stunning World Cup victory over Wales in Nantes 12 years ago.

Fiji lock Tevita Cavubati followed Owens into the sin-bin for an offence at a ruck, and Wales responded with an opening try after Adams caught Biggar’s kick to touch down, with the latter converting.

Relentless pressure had to tell and Fiji could not hold out as Adams touched down again, before Biggar’s conversion made it 14-10 at the interval.

Fiji had no intention of going quietly, with Wales stretched defensively during the second half’s opening minutes.

Wales captain Alun Wyn Jones’ handling error under no pressure in midfield illustrated how much of an impact Fiji had made on the game, and Davies was then sin-binned for killing possession.

Davies had hardly made his way off the pitch when the Wales forwards pulled down a Fiji driving maul and referee Jerome Garces awarded a penalty try that meant Wales trailed 17-14 after 54 minutes.

Patchell replaced Biggar and he immediately kicked a long-range penalty that tied the scoreline.

It was a thrilling and pulsating contest, with Wales hoping their fitness levels might prove decisive as the game entered its closing quarter.

And when centre Jonathan Davies made a slashing break, Adams finished brilliantly to complete his hat-trick, giving Wales a five-point advantage.

From seafarer to ‘e-farer’, shipping looks for the crews of tomorrow